The Institute’s collection of more than fifty manuscript orderly books is one of the largest institutional holdings of orderly books in the United States. The majority of the orderly books are of American origin—for either Continental Army or local militia units—but the collection also includes some that document British operations during the French and Indian and Revolutionary wars. The collection is notable for the range of dates and units it covers, providing researchers the opportunity to compare examples of these critical day-to-day records of American and British military activities during two wars.

Among the highlights of the collection is an orderly book kept by Gershom Foster at Cambridge, Massachusetts, which opens with George Washington’s General Order of January 1, 1776, directing his officers to keep orderly books: “His Excellency hopes that the importance of the great cause in which we are engaged will be deeply impressed upon every man’s mind; and wishes it to be considered that an Army without order, regularity and discipline is no better than a Commissioned Mob….  It is ordered and directed that not only every Regiment, but every Company, do keep an Orderly Book, to which frequent recourse is to be had, it being expected that all standing orders be rigidly obeyed.” With this order Washington formalized the practice, familiar from British military tradition, of systematically keeping a daily record of the general, brigade and division orders, Congressional declarations, courts-martial and disciplinary actions, troop movements and other details of military operations at every unit level. As orders were handed down through the ranks they were copied into the unit’s orderly book. At the company level, the orderly book was kept by the orderly sergeant who then read the orders aloud to the junior officers and enlisted men.

The orderly books reveal in vivid, often gritty detail the realities and hardships of camp life, with frequent injunctions about cleanliness, profanity, theft, treatment of civilians in the community and proper behavior in camp. An orderly book covering the New York campaign during the summer of 1776 addresses the jealousies and strife that erupted among troops from different parts of the country, entreating the men to “consider the Consequence that they can no ways assist our Cruel Enemies more Effectually than making Division among our Selves.”

But the practical and routine details of army administration were often punctuated with news of the events that shaped and propelled the war. The orderly book of Lord Stirling’s Division kept in the early fall of 1780 by Lt. William Popham records the haunting announcement handed down by Major General Nathanael Greene on September 26: “Treason of the blackest dye was yesterday discovered – Genl. Arnold who commanded at West Point, lost to every sentiment of honor, of private & public obligation, was about to deliver up that important post into the hands of the Enemy. Such an event must give the American cause a deadly wound if not a fatal stab – happily the Treason has been timely discovered, to prevent the fatal misfortune.” The orderly book of the New Hampshire Brigade, which was then stationed at West Point, picks up in the aftermath of Arnold’s treason, documenting the heightened security procedures that were ordered for that post.

The Society of the Cincinnati has assembled its orderly book collection volume by volume, through gift and purchase over a period of more than seventy years. The donors usually have been descendants of the original officers who kept the orderly books and carried them home as records of their wartime experiences. A large proportion of the orderly books were purchased for the Robert Charles Lawrence Fergusson Collection, and the acquisition of orderly books continues to be a top collecting priority. These unique, largely unpublished manuscript volumes offer researchers an unparalleled resource for studying the daily operations of the army in the era of the American Revolution.

To learn more about orderly books as physical objects and their conservation treatment, visit our profile on the preservation of orderly books of the Continental and British armies in Conservation. 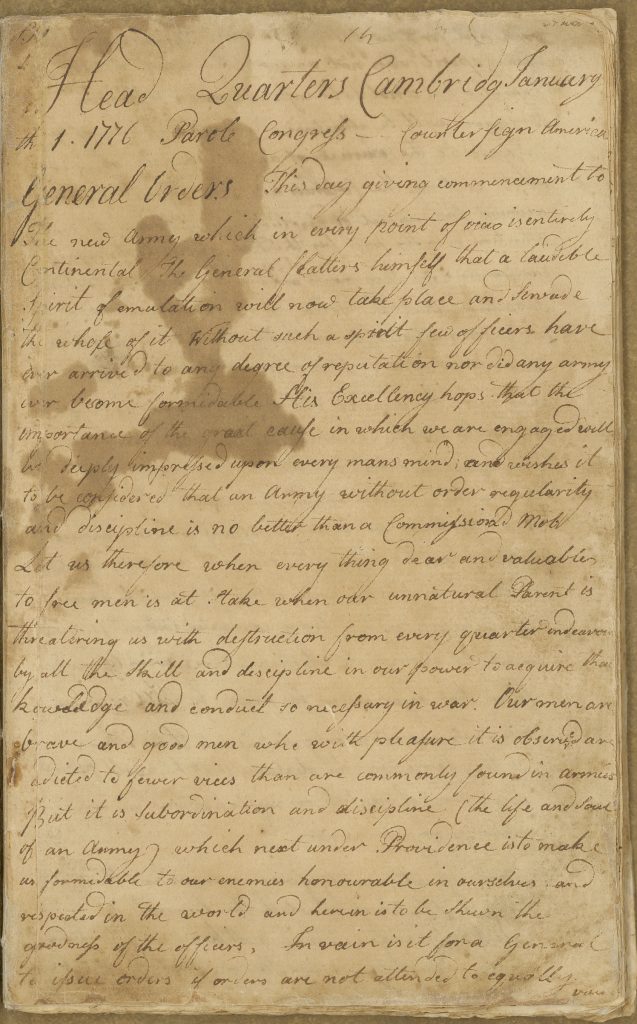 This volume includes George Washington’s general order to keep orderly books: “It is ordered and directed that not only every Regiment but every company do keep an Orderly Book to which frequent recours is to be hand, it being expected that all standing orders be rigidly obayed untill altered or countermanded.” 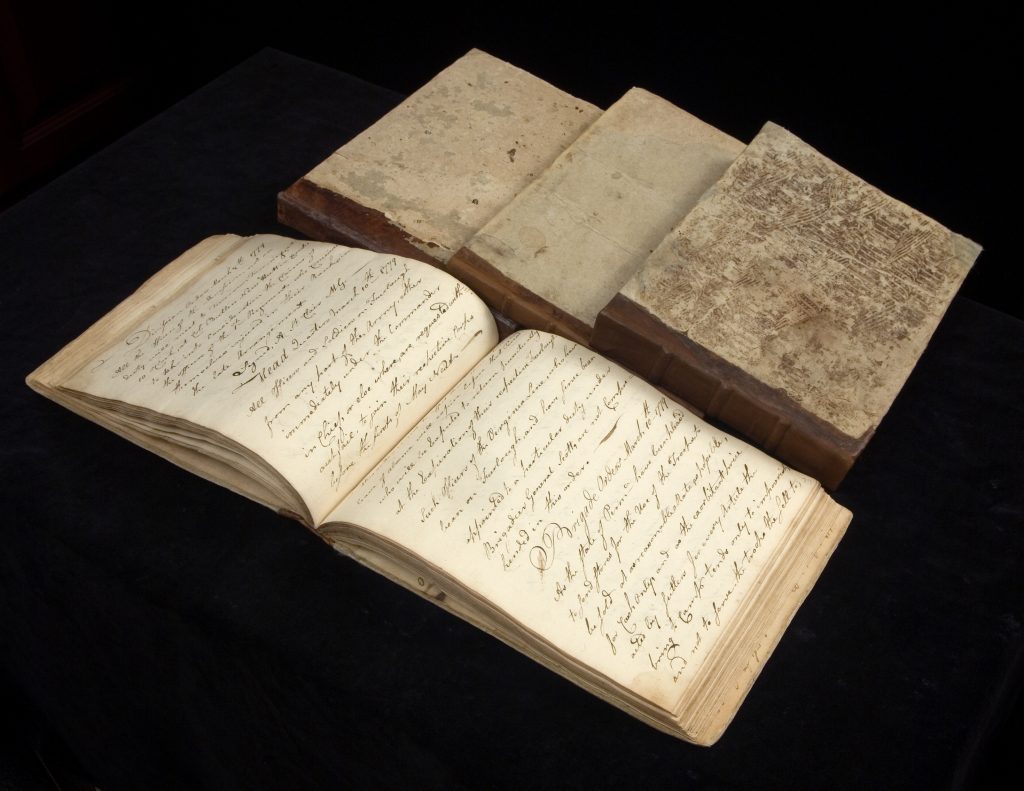 The daily record of a regiment’s orders and activities were typically kept in small blank books simply bound in paper-covered boards, as shown here. The open volume is “Captain Jacob Bower’s Orderly Book in the Year of Our Lord 1779,” kept at Middlebrook, New Jersey, January 1-April 27, 1779. 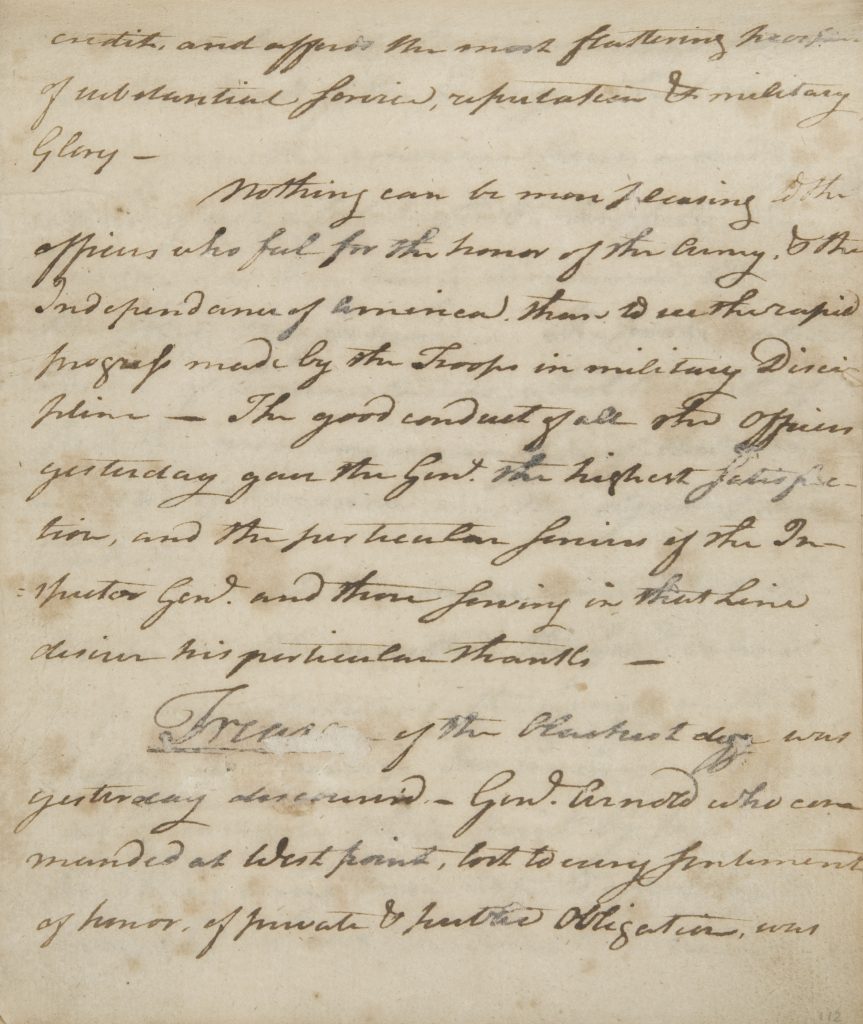 This entry on September 26, 1780, transmitted the stunning announcement, “Treason of the blackest dye was yesterday discovered – Genl. Arnold who commanded at Westpoint, lost to every sentiment of honor, of private & public obligation, was about to deliver up that important post into the Hands of the Enemy.” 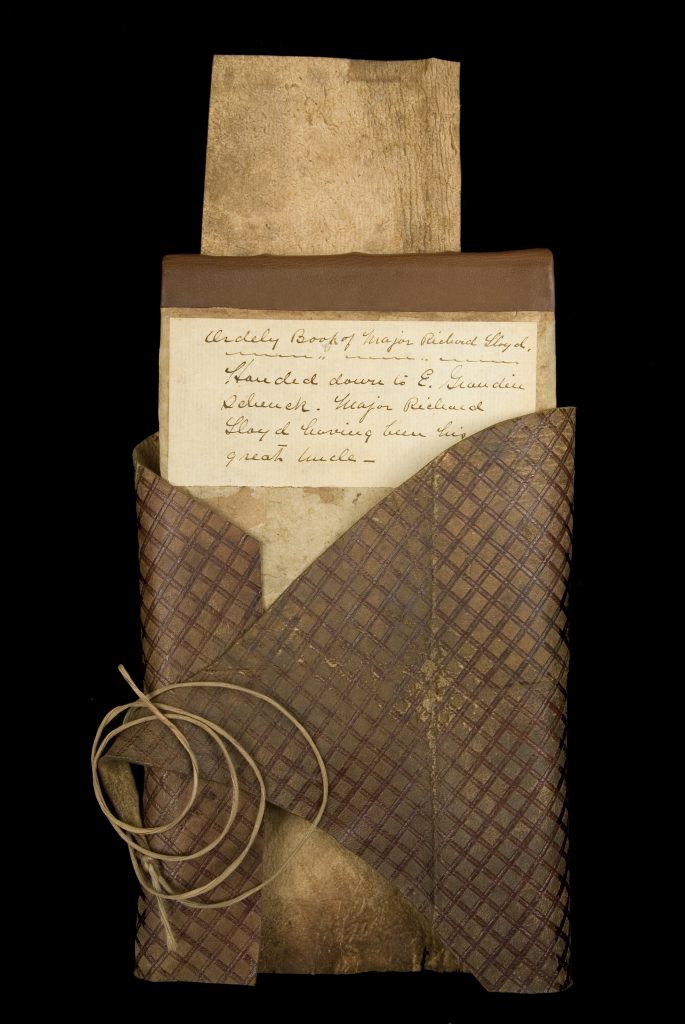 Picking up in the aftermath of Arnold’s treason, this orderly book details the heightened security in and around West Point through the fall and winter of 1780-1781. The volume survives with an unusual protective leather wrapper. 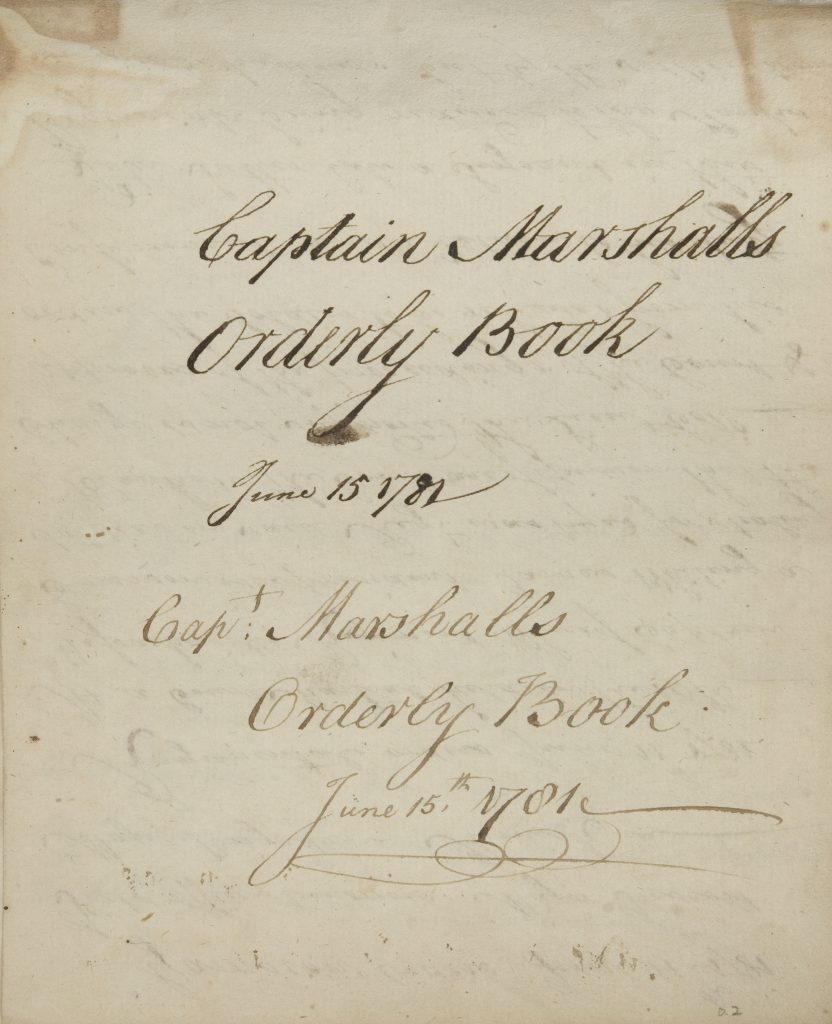 This volume reveals the tensions and shortages faced by the Tenth Massachusetts Regiment posted in New York during the months leading up to the Yorktown campaign. The entries are in the handwriting of Capt. Christopher Marshall, who signed his name boldly on the opening page. 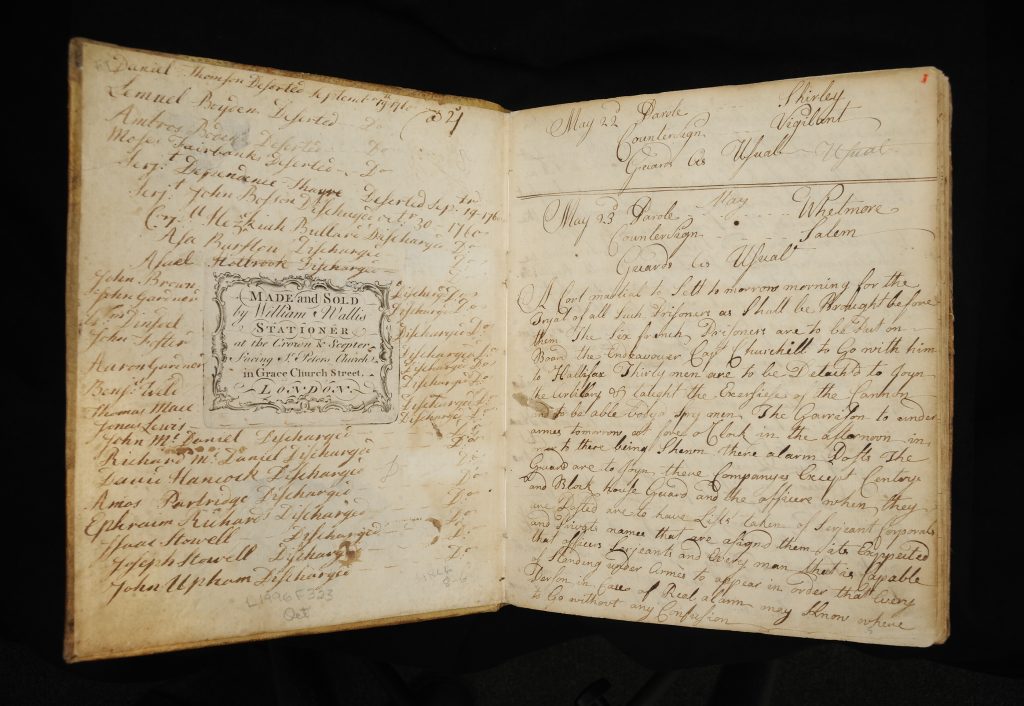 This volume documents the orders and activities of a Massachusetts provincial regiment assigned to Fort Cumberland in Nova Scotia during the French and Indian War. Of special note are the instructions of the regiment’s commander, Col. Joseph Fry, on interactions with the local French and Indian populations—including charity to those “who may be in such pressing want of provisions.” The label of the stationer who made the blank book is intact on the front end-paper, around which are recorded the names of soldiers who had deserted or been discharged from the regiment. 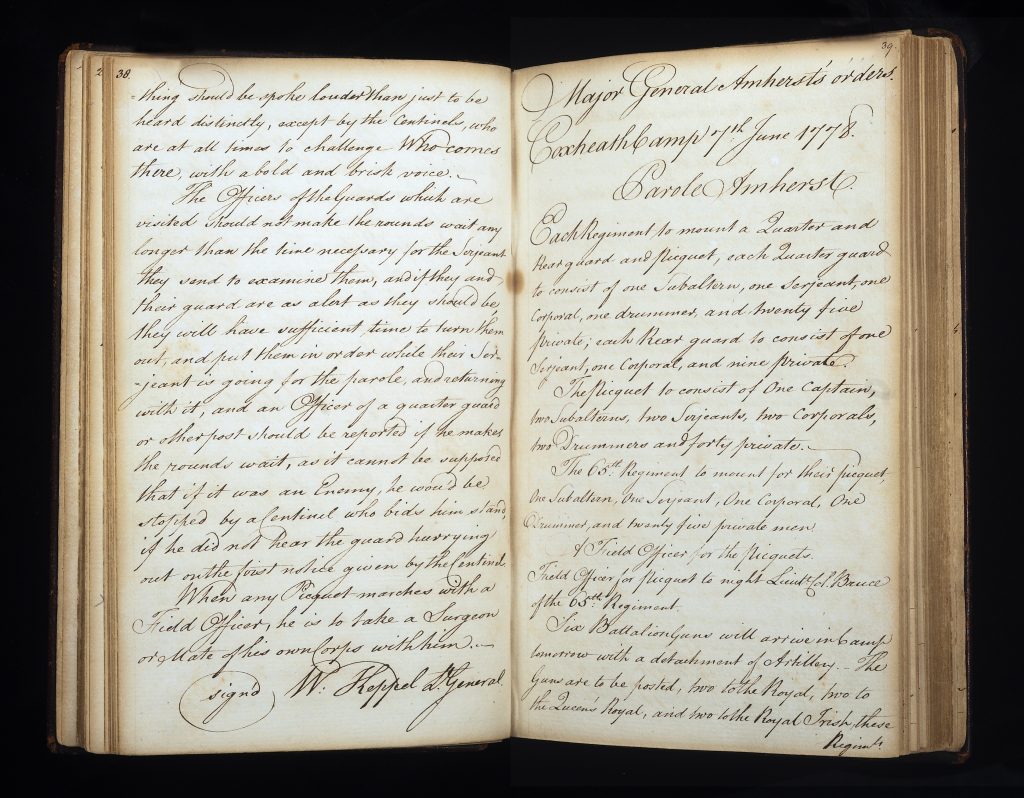 Located about forty miles southeast of London, Coxheath Camp was the largest of the special military training camps established to defend the British homeland during the American War. More than seventeen thousand troops were stationed at Coxheath under the command of Lt. Gen. William Keppel during the summer of 1778.
The American Revolution Institute
Anderson House is Closed