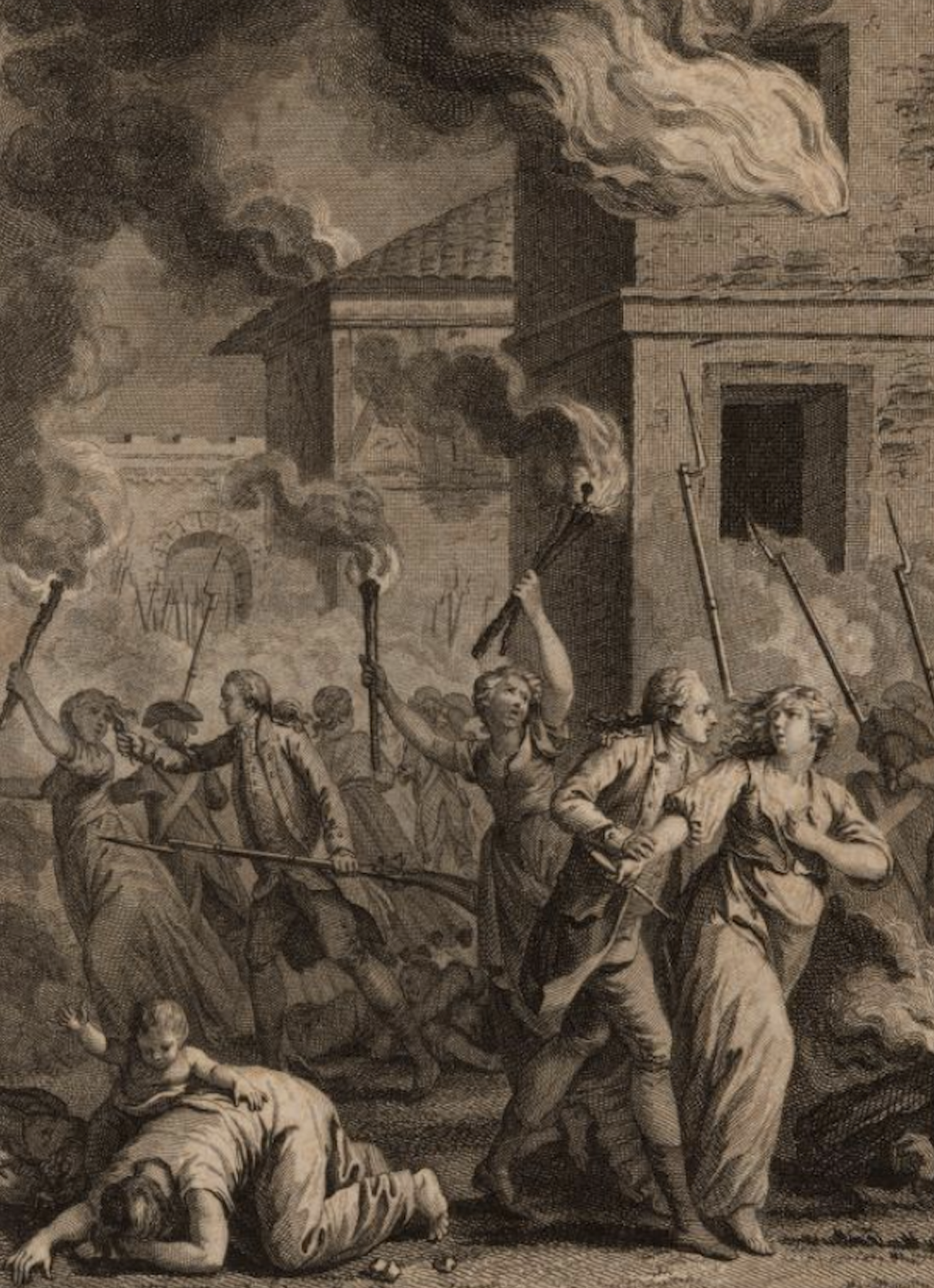 The Revolutionary War dramatically affected the speed and nature of broader social, cultural and political changes, including shaping the place and roles of women in society. Whether loyalist or patriot, indigenous or immigrant, enslaved or slave-owning, going willingly into a battle or responding when war came to their doorsteps, women participated in the conflict in complex and varied ways that reveal the critical distinctions and intersections of race, class and allegiance that defined the era. This panel will consist of a panel of contributors to the recently publishedWomen Waging War in the American Revolution, and will be lead by Dr. Holly Mayer, professor emerita of history at Duquesne University and editor of the anthology.

The discussion will last approximately 60 minutes, followed by a book signing. Copies of the book will be available to purchase at the event.

“The First Incendiary: A Female Firebrand and the New York City Fire of 1776″

The “first Incendiary” was a woman who supposedly helped set fire to New York City on September 21, 1776, as the British army marched in to occupy it. By discussing women’s roles in wartime, this essay assesses how her contemporaries would have reacted to a woman committing such an act of radical destruction. Although her story was ultimately suppressed, some contemporary writers were intrigued by the idea of a woman willing to sacrifice property for a patriotic cause. By looking at an “unruly woman,” the essay suggests the presence of radical female actors insufficiently noted or appreciated by historians of women and the military events of the Revolutionary War.

Benjamin Carp is M. Lyons Chair of American History and associate professor of early American history at Brooklyn College. He authored Defiance of the Patriots: The Boston Tea Party and the Making of America (Yale, 2010), which won the Cox Book Prize from the Society of the Cincinnati in 2013, and Rebels Rising: Cities and the American Revolution (Oxford, 2007).

“’A shocking thing to tell of’: Female Civilians, Violence, and Rape under British Military Rule”

The American Revolution was an agonizingly traumatic experience for many women. In British-occupied cities, the specter of sexual violence overshadowed encounters between soldiers and female civilians. Wartime circumstances and military institutional culture gave men increased license to coerce sex, exposing women of all races, classes and states of freedom to new dangers. American women’s testimonies about rape and sexual assault in British courts martial and Continental Congress depositions reveal that the threat of sexual violence transformed women’s relationships to safety and the spaces they inhabited. Centering the violence and trauma of wartime experiences, this chapter examines the multifaceted ways that female civilians contested their misuse at the hands of British troops. Mounting the stand, women condemned British soldiers’ treatment of their homes and bodies, revealing not only the personal stakes of warfare, but the networks and communities upon which they relied during wartime.

Lauren Duval is assistant professor of history at the University of Oklahoma. She holds a Ph.D. from American University. She is the author of “Mastering Charleston: Property and Patriarchy in British-Occupied Charleston, 1780-82” in the William and Mary Quarterly (2018), which received the journal’s Richard L. Morton Award. (Her related book manuscript is under review.)

“Killed, Imprisoned, Struck by Lightning: Soldiers’ Wives on Campaign with the British Army”

“Quite alone,” the wife of British soldier John Middleton “took & disarmed six Provincial Soldiers, & was the means of two more being taken” in a 1776 battle. Soldiers’ wives, so prevalent that they often appear in contemporary illustrations of the military, are regularly mentioned in British military documents, diaries, journals, newspapers and other writings. Yet only rarely are they mentioned by name. John Middleton’s background and military career can be traced through army records, but even though she accomplished something heroic, his wife’s first name remains unknown and her identity subsumed within his and that of the general category “camp follower.” This essay describes the circumstances and sufferings of British army wives on voyages, in garrisons, on campaigns and in battles of the American Revolution, showing their tenacity in war while exposing how recording gaps and biases buried their identities as individuals.

“A Black Loyalist’s Liberty: How Lucy Banbury Took Back Her Freedom”

Records of enslaved persons who emancipated themselves during the American Revolution are few, but they exist. A major compendium, the Book of Negroes, lists black loyalists who escaped slavery and left with the British military at the end of the War for Independence. While it, like other records, largely references men, women also appear. Building on gender-focused studies of such historians as Carol Berkin, Betty Wood and Cassandra Pybus, this essay offers a brief biography of one woman named in the Book. Lucy Banbury stole herself from Arthur Middleton, the powerful South Carolinian and Declaration of Independence signer. Lucy and her husband John made perilous separate journeys to freedom but eventually sailed to Nova Scotia together. She later journeyed alone to her home continent of Africa. The sparse documents reveal Lucy to have been determined, hopeful and courageous as she “warred” for her own independence and became free.

Carin Bloom is the manager of education and programming at Historic Charleston Foundation in Charleston, South Carolina. She conducted the research for her essay at Middleton Place Foundation, where she was previously the director of engagement. She earned M.A. degrees in anthropology from the University of Pennsylvania and Temple University, specializing in historic sites of conflict archaeology. She participated in and instructed field schools at St. Mary’s City, Maryland, and at Valley Forge National Historical Park.

Dr. Mayer is professor emerita of history at Duquesne University in Pittsburgh and currently serves as the 2021-2022 Charles Boal Ewing Chair in Military History at the United States Military Academy, West Point. In 2016-2017, she was the Harold K. Johnson Chair of Military History at the U.S. Army War College. Her interest in the social, cultural and military histories of late eighteenth-century North America informed her latest book, Congress’s Own: A Canadian Regiment, the Continental Army, and American Union (University of Oklahoma Press, 2021), as well as her earlier book, Belonging to the Army: Camp Followers and Community during the American Revolution (University of South Carolina Press, 1996). In addition to authoring various journal and anthology essays, Mayer was co-editor (with David E. Shi) of For the Record: A Documentary History of America (W.W. Norton & Company, multiple editions). Most recently, she is the editor of the anthology Women Waging War in the American Revolution, published in August 2022 by the University of Virginia Press.

Click here to attend the Panel Discussion virtually
Tickets are not available as this event has passed.
+ Google Calendar+ iCal Export