During the Revolutionary era, medals were the most common way for governments and private groups to honor individuals and mark important events. In 1776 the Continental Congress awarded the first medal of the Revolutionary War, presented to George Washington to commemorate the Siege of Boston that forced the British evacuation of the city. Congress authorized at least a dozen medals during the founding era to express national appreciation for individual heroism and major victories of the Revolution. Copies of these medals were made during the eighteenth century and in the years since, communicating the nation’s achievements and ideals to a broader American public.

The several hundred medals in the Institute’s collections were made from the Revolutionary era through the present. They include the Voltaire medal, created by the French philosopher and Benjamin Franklin in 1778 to honor George Washington, and copies of the Comitia Americana (American Congress) medals made in the nineteenth and twentieth centuries. They also include medals created in the generations following the Revolution to commemorate its participants and events and to mark anniversary celebrations and monuments.

The Institute also holds a significant collection of Society of the Cincinnati Eagle insignias, the membership badge of the hereditary organization. Designed by Pierre-Charles L’Enfant in 1783, the Society Eagle celebrates the achievement of American independence and the commitment of those who have worn it to the memory of the Revolution.

Explore Society of the Cincinnati Insignias 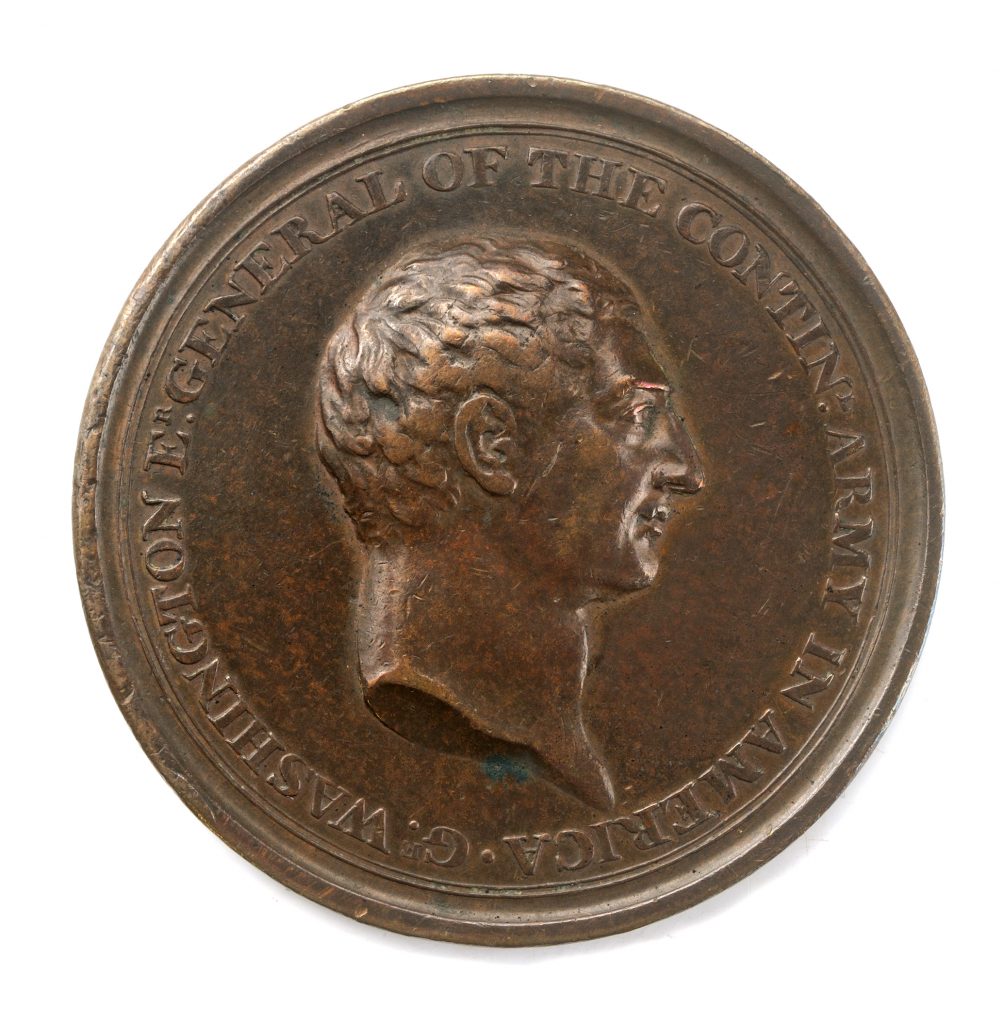 Benjamin Franklin and the French philosopher Voltaire collaborated to produce this bronze medal in honor of George Washington. The obverse depicts a generalized portrait of the general—as no true likeness of Washington existed in France at the time. The reverse displays military symbols and a Latin inscription meaning, “Washington combines in a single union the talents of a warrior and the virtues of a philosopher.” 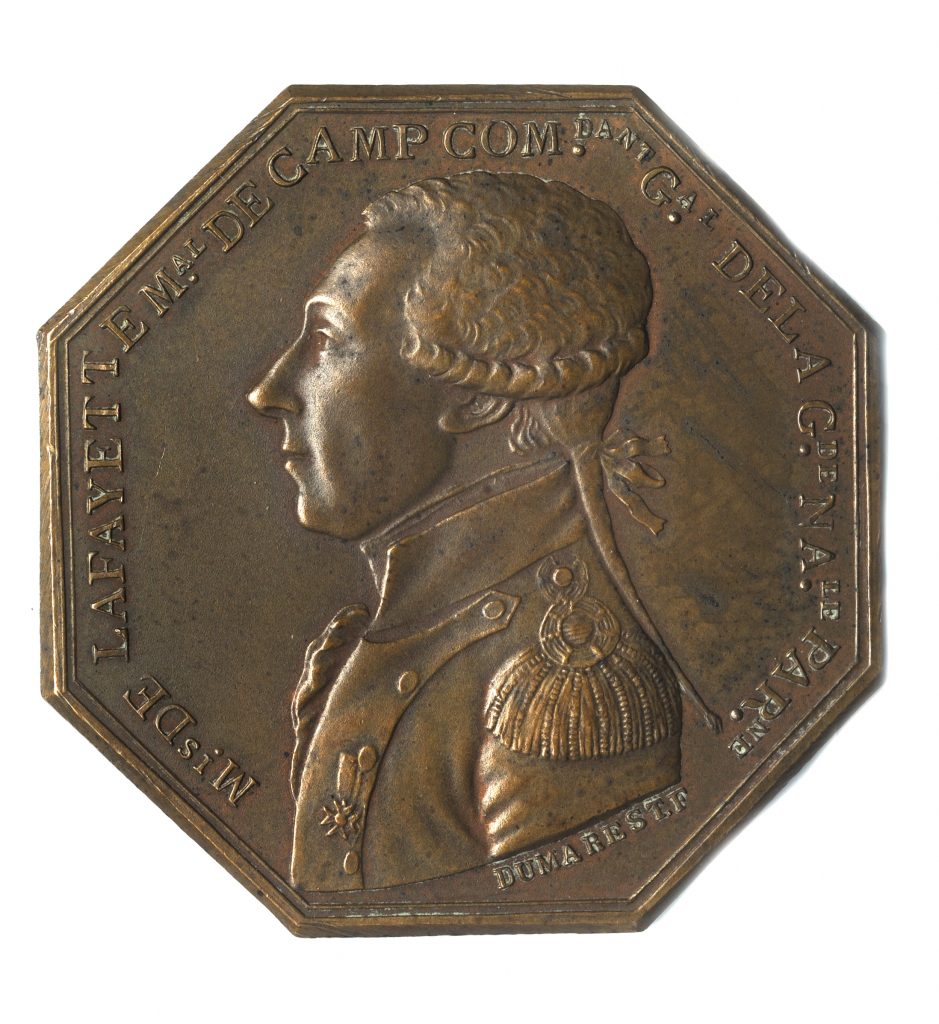 Lafayette welcomed the French Revolution as an opportunity to secure the kind of liberty for France that he had fought for in America. He became commander of the Paris National Guard the day after the storming of the Bastille in July 1789. This bronze medal commemorates his leadership of the city’s militia—a position he held for two years. The obverse bears a portrait of Lafayette wearing a French military uniform, and the reverse features the coat of arms of Paris and a banner above with the motto, “Vivre Libre ou Mourir.” 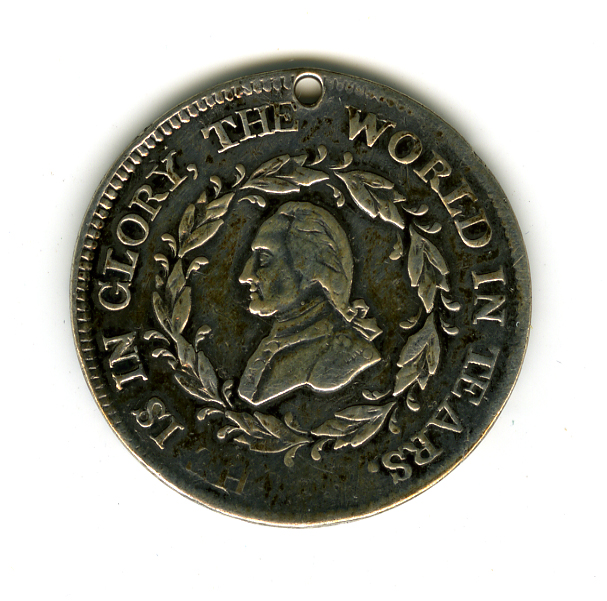 This small silver coin was sold as a tribute to George Washington shortly after his death on December 14, 1799. The reverse features a funeral urn bearing Washington's initials. The hole punched at the top allowed the coin to be worn or displayed. 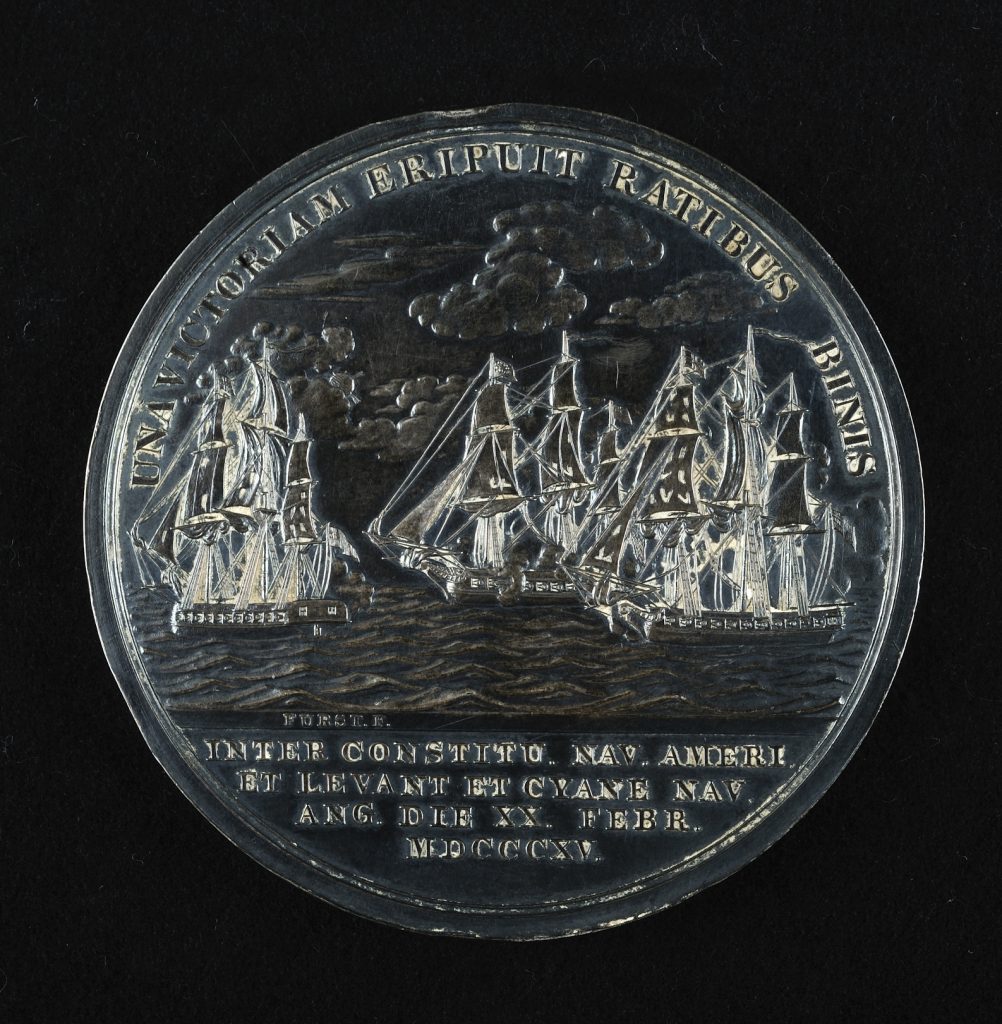 Gift of W. B. Shubrick Clymer, Society of the Cincinnati of the State of South Carolina, 1969

The spirit of the Revolution was revived during the War of 1812, which created a new generation of American heroes. In 1816 Congress awarded a gold medal to Capt. Charles Stewart, who commanded the USS Constitution in victory over the HMS Levant and Cyane the previous year. This silver version was presented to Lt. William Branford Shubrick, who served on the Constitution in the battle. 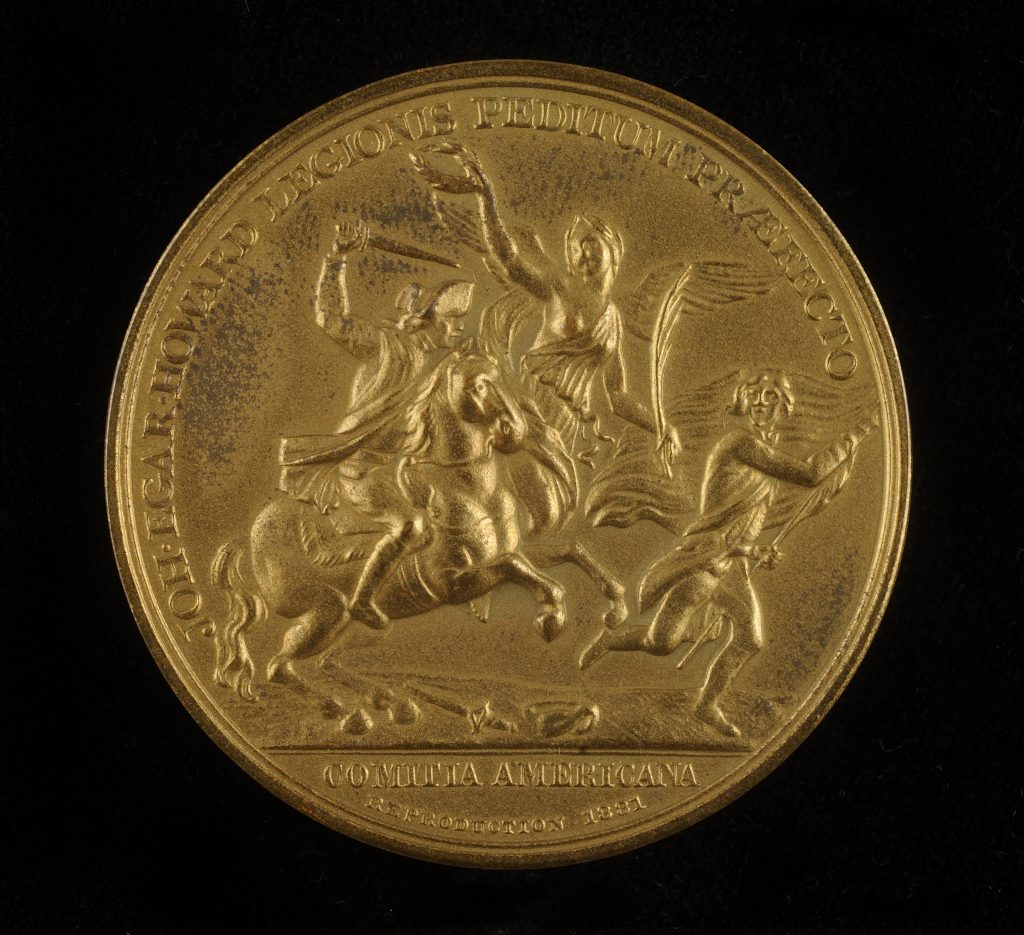 John Eager Howard at the Cowpens

Gift of Captain and Mrs. William Jeffries Chewning, Society of the Cincinnati in the State of Virginia, 1963

In January 1781, American troops led by Gen. Daniel Morgan defeated British forces under Lt. Col. Banastre Tarleton at the Cowpens, a large pasture on the South Carolina-North Carolina border. For his crucial role in the victory, Congress awarded a silver medal to Lt. Col. John Eager Howard, who commanded the Maryland and Delaware men at Cowpens. The medal was struck in Paris in 1789 as part of the Comitia Americana (American Congress) series. The obverse depicts Howard on horseback pursuing an enemy soldier carrying a flag, while the figure Fame flies overhead. This electrotype copy was produced in the late nineteenth century. 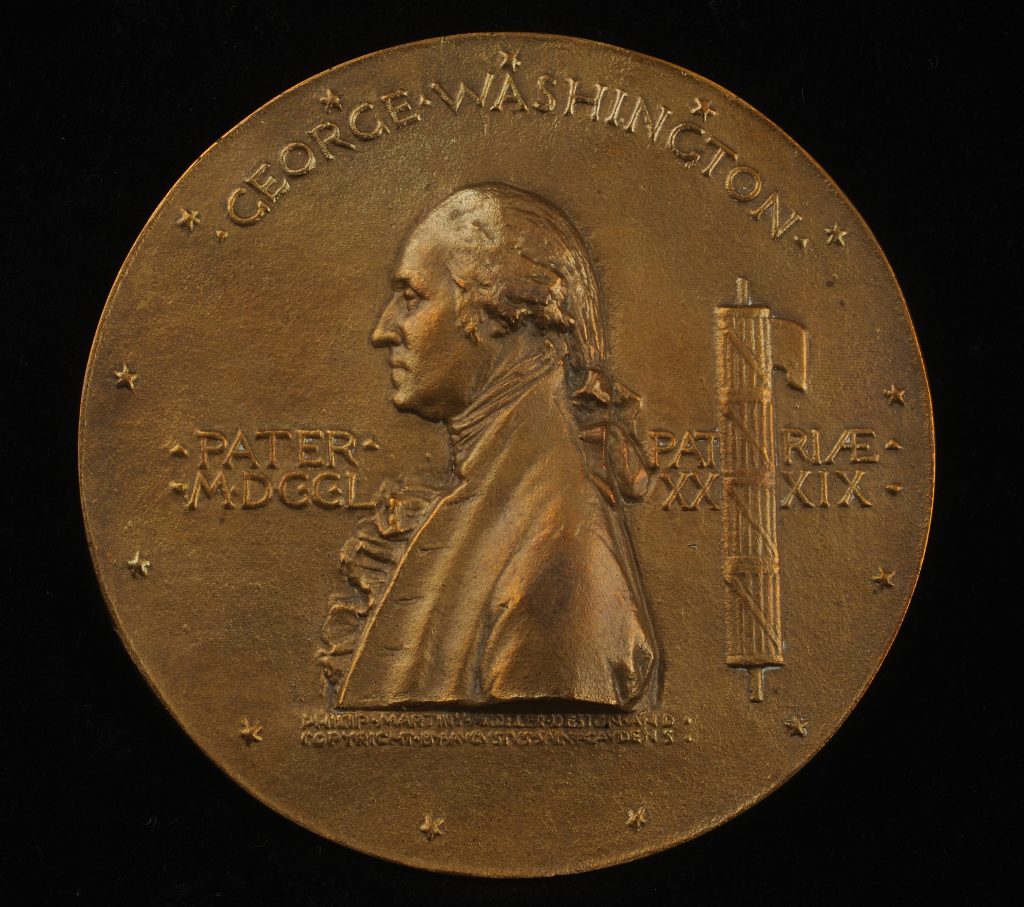 Gift of Thomas R. Goethals, Society of the Cincinnati in the State of Connecticut, 1994

Sculptor Augustus Saint-Gaudens designed this medal to be the official souvenir for the one hundredth anniversary of George Washington’s inauguration as first president of the United States. Next to the profile portrait of Washington on the obverse appears the fasces, an ancient Roman symbol of authority represented by a bundle of staves and an axe. This is one of two thousand bronze examples made for the centennial celebration. 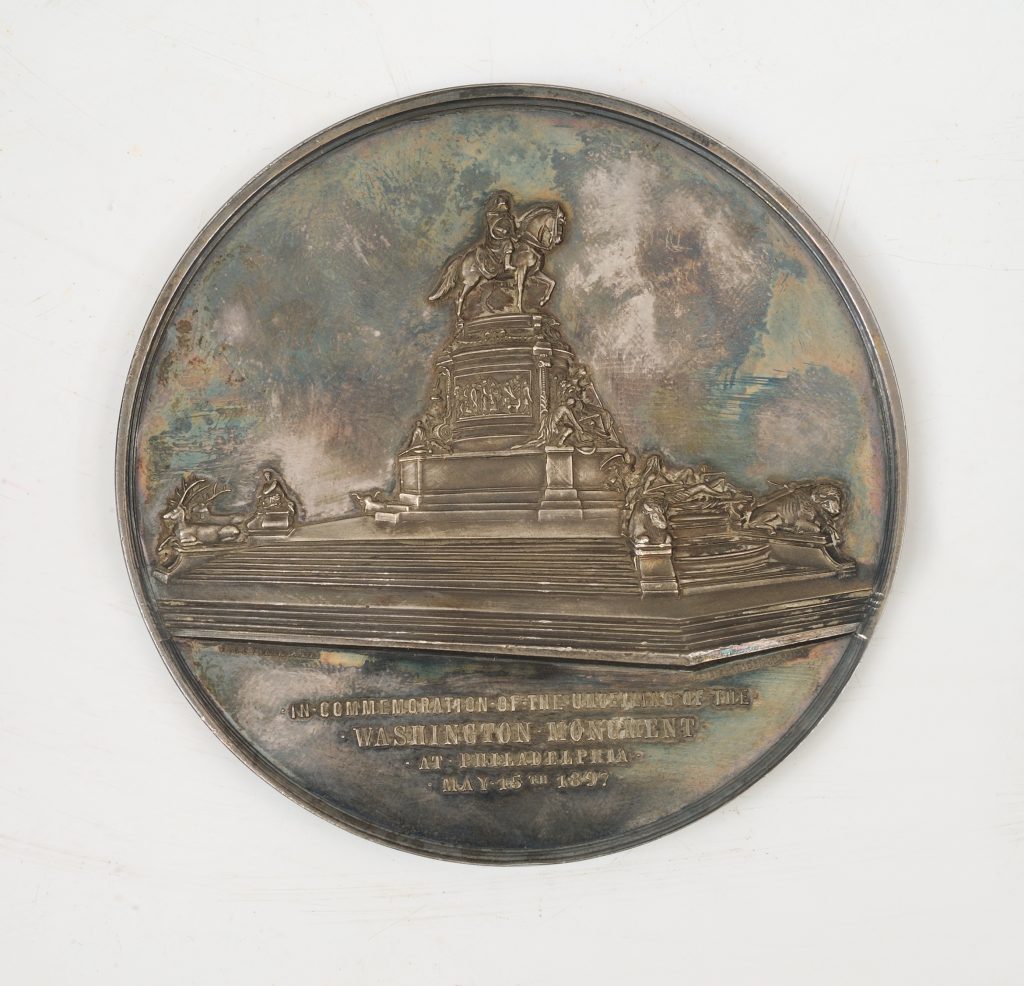 Medal commemorating the unveiling of the Washington Monument in Philadelphia

Gift of Joseph K. Fornance, State Society of the Cincinnati of Pennsylvania, 1962

In May 1897, an equestrian monument to George Washington commissioned by the State Society of the Cincinnati of Pennsylvania was unveiled in Philadelphia's Fairmount Park (moved to an oval in front of the Philadelphia Museum of Art in 1925-1926). This silver medal, given to honored guests at the dedication, pictures the monument on the reverse and the Society of the Cincinnati insignia on the obverse. 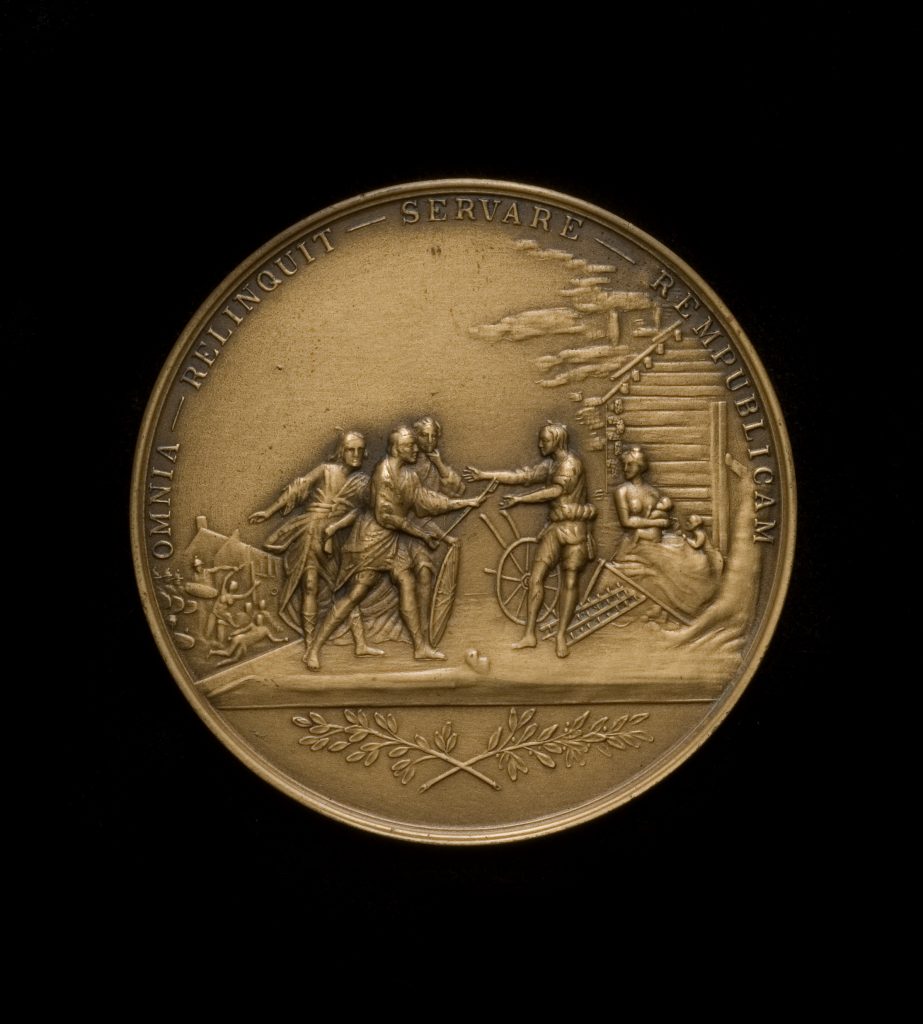 Society of the Cincinnati medal

Gift of Paul Thruston Mackie, Society of the Cincinnati in the State of Virginia, 1959 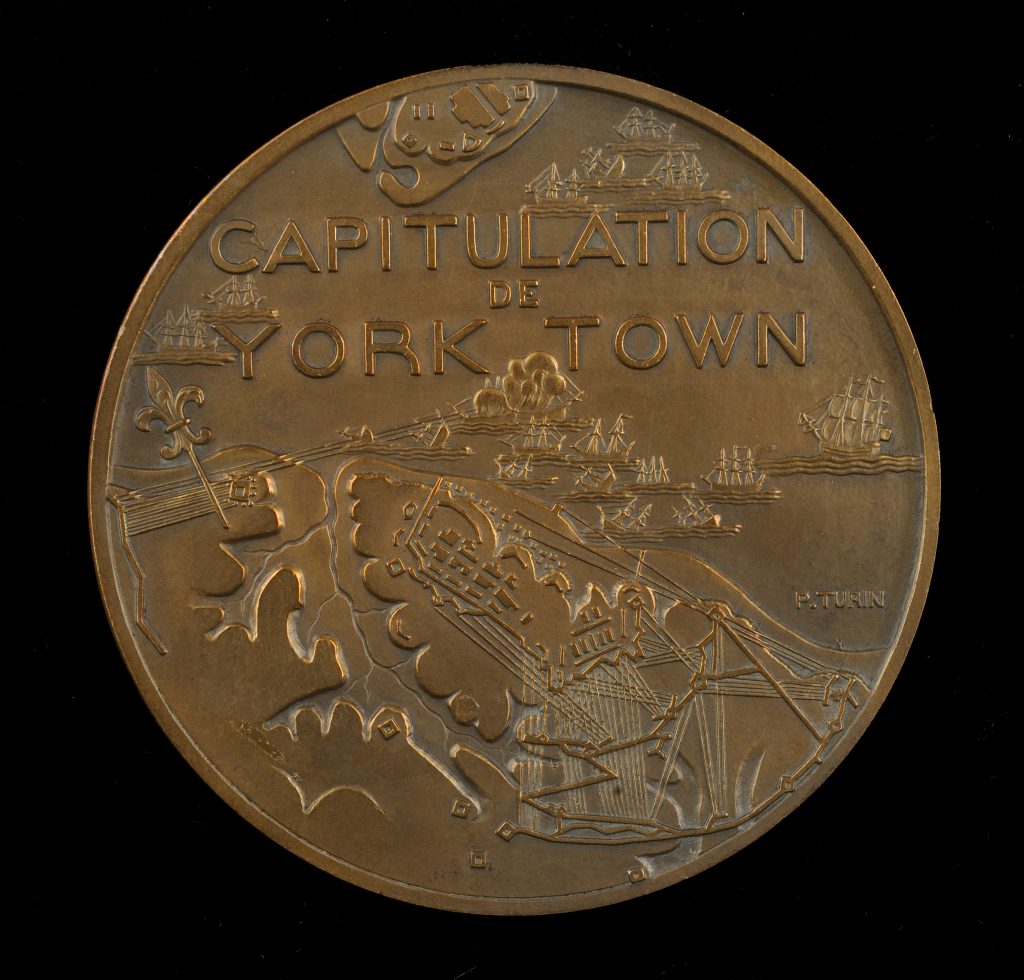 Medal commemorating the 150th anniversary of the capitulation at Yorktown

Gift of Thomas R. Goethals, Society of the Cincinnati in the State of Connecticut, 1994

Marshal Philippe Pétain, who led the French delegation to the American commemoration of the 150th anniversary of the capitulation of Yorktown, distributed this bronze medal bearing profile portraits of Washington, de Grasse and Rochambeau on the obverse and a plan of the town on the reverse.
The American Revolution Institute