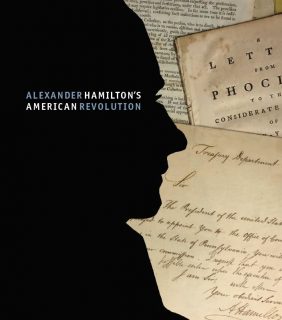 Rare original artifacts and documents from the life of Alexander Hamilton, one of the most important—and now perhaps the most popular—of America’s founding fathers, will be on display in a new exhibition in Washington, D.C. Alexander Hamilton’s American Revolution will be on view from March 15 through September 16, 2018, at the American Revolution Institute of the Society of the Cincinnati in Washington, D.C.

The American Revolution was a defining event in Alexander Hamilton’s life and influenced his vision for the nation and its institutions. Alexander Hamilton’s American Revolution chronicles his participation in the Revolutionary War—as a political essayist, artillery captain, aide to George Washington and battlefield hero at Yorktown—and explores its impact on his work to help create and sustain the new American republic. The exhibition tells these stories through nearly forty manuscripts, rare books, artifacts and works of art drawn from the collections of the American Revolution Institute and distinguished lenders.

“Our exhibition highlights some of the lesser-known aspects of Hamilton’s life,” says Emily Parsons, the Institute’s deputy director and curator, “especially his time as a soldier and involvement in the Society of the Cincinnati, and asks why these events matter in the larger course of his life. Whether visitors come knowing nothing about Hamilton or can recite the entire musical’s soundtrack, I hope they encounter something new in the artifacts and stories in this exhibition.” The exhibition is on display during the entire run of the musical Hamilton at the Kennedy Center.

Hamilton was one of the few revolutionaries to contribute both the power of his words and the might of his sword to the cause for American independence. A recent immigrant from the West Indies, he quickly befriended prominent American patriots and embraced the fight against British oppression. Beginning in December 1774—while a seventeen-year-old student at King’s College—Hamilton published a series of political essays defending the right of Americans to govern themselves. Hamilton’s writings established him as one of the leading voices of the American cause and one of the best essayists in the colonies.

Spurred by the outbreak of hostilities at Lexington and Concord, Hamilton joined the American forces in the spring of 1775. In less than two years, he went from an energetic but inexperienced private in a volunteer militia unit to a battle-tested commander of a company of the Continental Artillery to an aide-de-camp to the commander in chief himself, George Washington. After four years of managing correspondence, debating military strategy and helping to maintain a national army, Hamilton secured the battlefield command he had yearned for. His leadership of the daring attack on a critical redoubt at Yorktown—which helped force the British surrender in October 1781—made him an American hero. A pair of epaulets Hamilton wore on his military uniform, a letter he wrote as Washington’s aide-de-camp, and books he read on military history and science are highlights of the artifacts on display from the Revolutionary War years.

Hamilton’s experiences during the Revolution convinced him that the new nation needed a strong national government and institutions in order for the union of states to survive. He also prized the rule of law, having seen that even a principled rebellion could sometimes devolve into chaotic mob rule. To establish an effective federal government, he worked tirelessly for the creation and ratification of the U.S. Constitution. To explain the document and garner support for its ratification, Hamilton conceived of The Federalist Papers, a masterful series of essays that remains the most important work of political thought in American history. The exhibition features a first-edition set of these essays published in 1788, on loan from Georgetown University’s Booth Family Center for Special Collections. The exhibition also includes documents illuminating his law career and his service as the first secretary of the treasury and the de facto commander of the U.S. Army during the threat of war with France in the late 1790s.

Shortly after the Revolution, Hamilton joined the Society of the Cincinnati, an organization of veteran officers dedicated to ensuring that the principles of the Revolution and the sacrifices required to win American independence would not be forgotten. Hamilton believed that the Society—one of the few national organizations in the young country—was a valuable force for ensuring that the American republic would survive. At a time when political, economic and cultural differences already threatened to fracture the new nation, the Society provided a reminder of the American republic’s ideals and origins. Hamilton helped to establish the New York branch of the Society in the 1780s, and later led the national organization as its president general, following George Washington in the role. The exhibition includes Hamilton’s gold insignia of membership in the Society, known as the Eagle, on loan from a private collection.

Alexander Hamilton died on July 12, 1804—just forty-nine years old—at the hands of Aaron Burr, his fellow veteran of the Revolution and member of the Society of the Cincinnati. Eulogies pronounced Hamilton second only to George Washington in the short history of their nation: “Five years have not elapsed since your tears flowed for the Father of your Country, and you are again assembled to shed them over her eldest Son.” One of the final objects on view in the exhibition is a simple gold mourning ring bearing a lock of Hamilton’s hair worn by his widow, Elizabeth, who carried the grief of her husband’s death for fifty years.

The Institute will host a series of public programs in conjunction with the exhibition, including:

Additional programs related to Alexander Hamilton will be added to the calendar as they are scheduled.