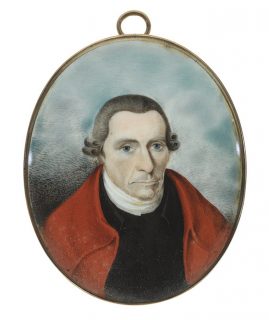 Lawrence Sully (1769-1803) painted this portrait miniature of Patrick Henry from life in 1795. It was executed in watercolor on ivory and measures 2 9/16 inches x 2 1/8 inches. It was long owned by Patrick Henry’s elder half-brother, John S. Syme, and his wife Sarah, and descended to their daughter Elizabeth Syme, then to her son John Syme Fleming, and finally to his son, also John Syme Fleming, who was a professor of mathematics at the Virginia Mechanics Institute in Richmond. He consigned the miniature to the auctioneer Stan V. Henkels, who sold it in his sale titled “The Henry Collection” on December 10, 1910. That sale included the Thomas Sully portrait of Patrick Henry now owned by the Colonial Williamsburg Foundation. The Henkels catalogue described the portrait miniature: “This is the original much-sought-after miniature of Patrick Henry, taken from life by a French artist at the time the great patriot was arguing the British Debt cases in the United States Court at Richmond, Virginia; it depicts him addressing the court, and from this miniature Thos. Sully painted the oil portrait (above described) for Wm. Wirt, his biographer.” The claim that the miniature was the work of a French artist is groundless. It is properly attributed to Lawrence Sully, whose initials can be discerned with a magnifying glass, along with the date 1795. The artist’s half-brother, Thomas Sully, used this portrait miniature as the basis for his much more commonly reproduced portrait of Henry, which he painted in 1815 for Henry’s biographer William Wirt. The portrait miniature was acquired either at or after the 1910 Henkels sale by Herbert L. Pratt, an oil industry leader who added it to his distinguished collection of portrait miniatures that he left to Amherst College when he died in 1945.