These collection items were selected for a morning workshop with teachers from the residential George Washington Teacher Institute studying “Washington at War” with scholar William Fowler. 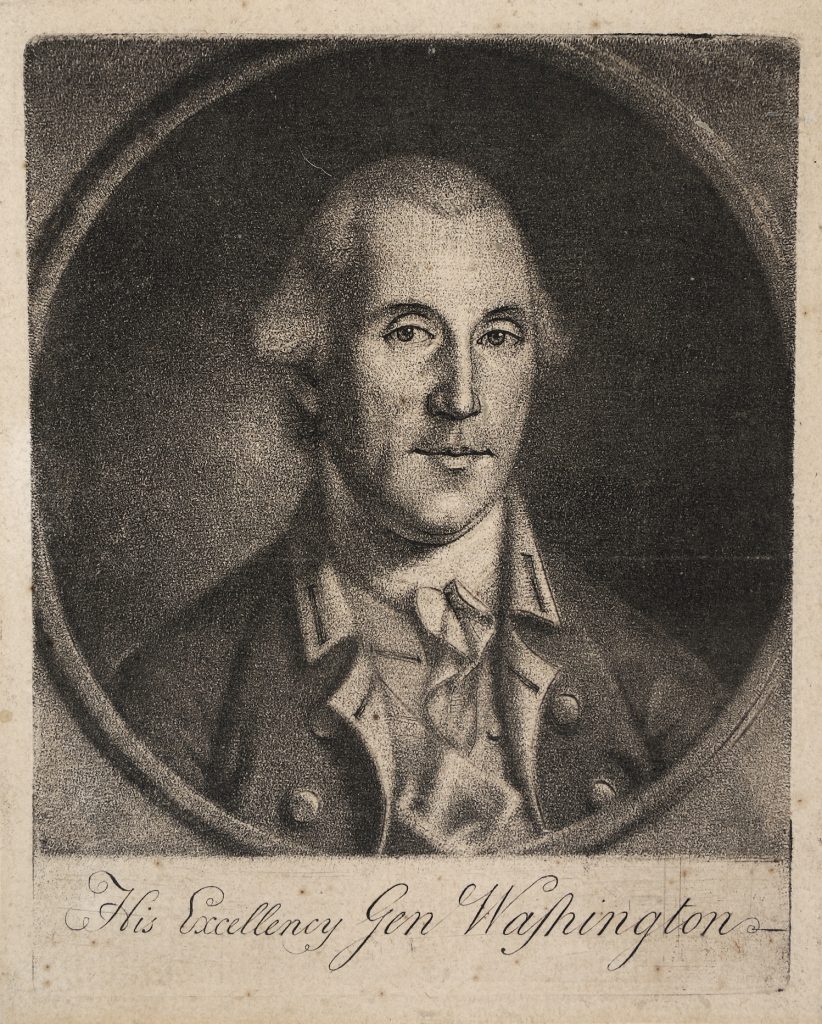 Peale's mezzotint is based on his own painting of Washington from life, the first authentic likeness of Washington to appear in print. One of only three examples of the mezzotint known (the other examples are in the collection of the National Portrait Gallery, Washington, DC; and in the Archivo General de Indias, Seville, Spain). 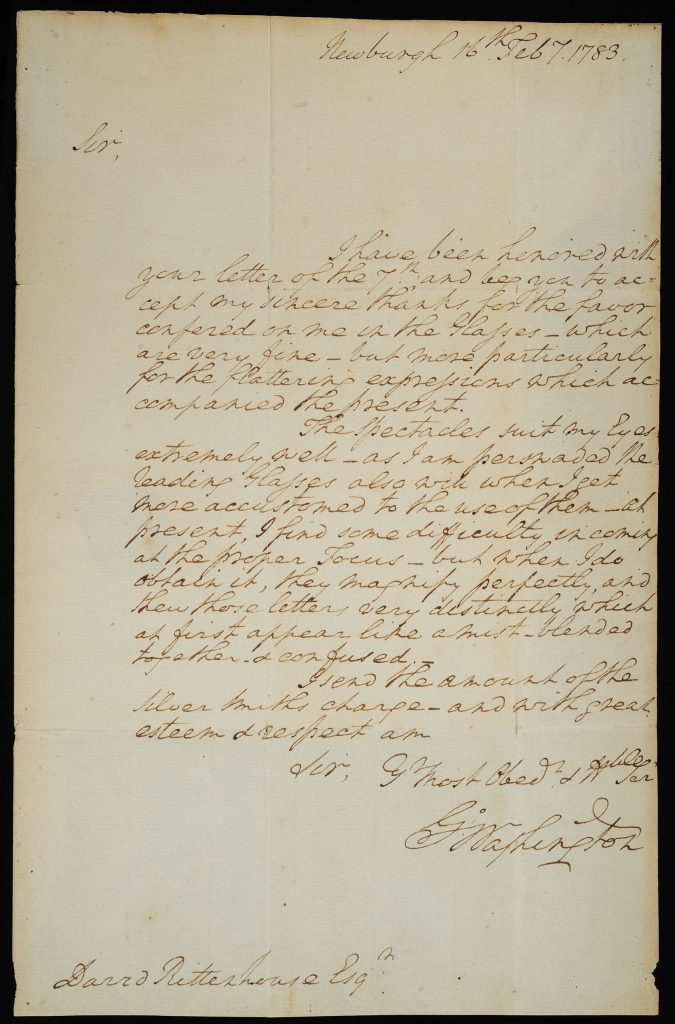 Washington's letter of thanks to the noted American inventor and instrument maker, David Rittenhouse, who had made a set of spectacles (one for distance and one for reading) for the General.
"The Spectacles suit my Eyes extremely well," Washington wrote, "as I am persuaded the Reading Glasses also will when I get more accustomed to the use of them - at present, I find some difficulty in coming at the proper Focus - but when I do obtain it, they magnify perfectly, and shew those letters very distinctly which at first appear like a mist blended together & confused." Three weeks later the reading glasses would be used to great effect when Washington, in attempting to quell a brewing mutiny of officers at Newburgh, pulled them from his pocket and said "Gentlemen, you must pardon me. I have grown gray in your service and now find myself growing blind." Partial red wax seal remains on address leaf. 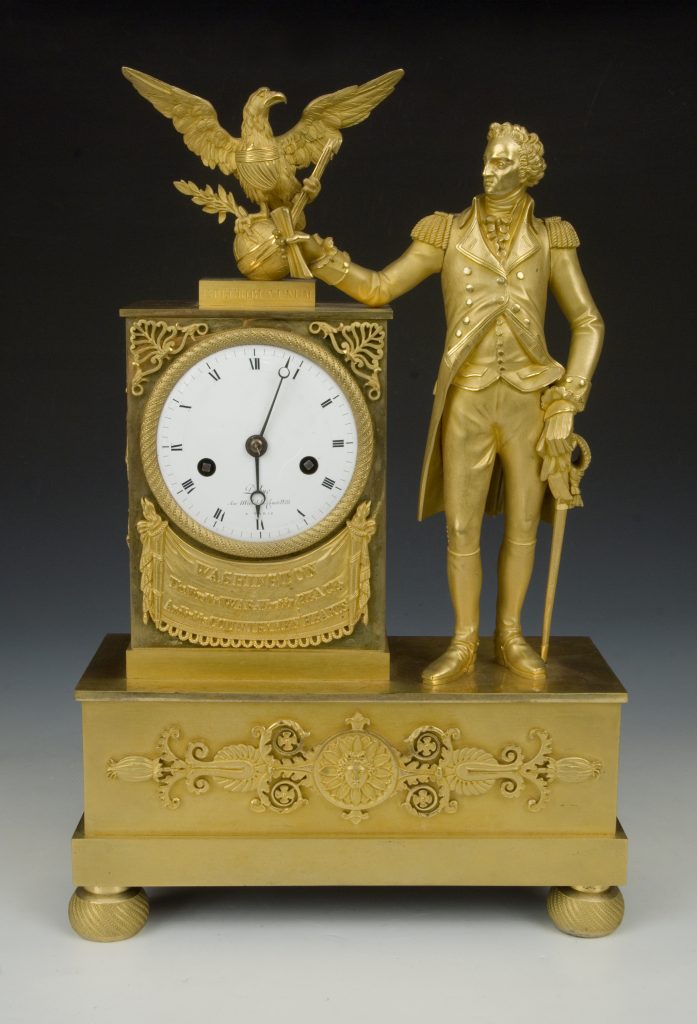 George Washington's death inspired artists and craftsmen in America, France and Great Britain to produce commemorative ceramics, medals, textiles and other objects memorializing the first president. This Neoclassical mantel clock, designed for the American market, features a standing figure of Washington in military uniform. The French clock's maker modeled the image of Washington after John Trumbull's 1792 portrait of the general before the battlefield at Trenton. The scroll held in Washington's right hand may allude to his resignation of his commission, an act comparable to Cincinnatus putting down his sword and returning to his plow. 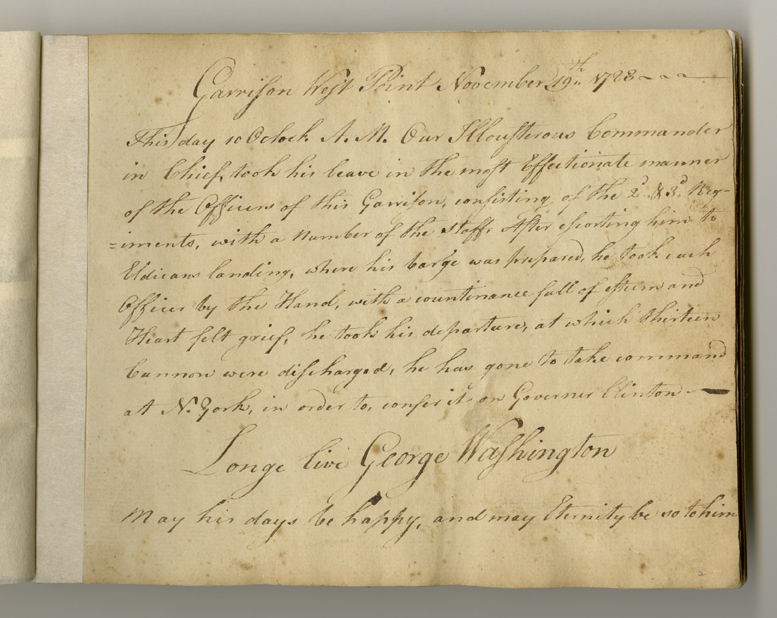 Includes regimental orders concern the "stipulated price for Taylors, Shoemakers, Barbers & Wash Women" dated March 6, 1783; grievances of the officers, known as the "Newburgh Addresses"; transcript of Washington's address to the officers, the letter from a member of Congress; Henry Knox's resolution that the officers remain devoted to the cause of liberty for which they had paid "the Price of their Blood and eight years of service"; announcement of the General Peace & full transcript of the Institution of the Society of the Cincinnati; "General Washington's Fairwell [sic] orders to the Armies of the United States," November 2, 1783; account of his taking leave of the 2nd and 3rd Massachusetts Regiments of at West Point before leaving to take command of New York City in November 1783. Kept by Ebenezer Smith (1746-1816), who was a private during the Lexington alarm & promoted to captain in the 2nd Massachusetts Regiment. He was also Mason & there is a poem about Masonic procession in this volume. Smith became an original member of the Massachsuetts Society of the Cincinnati.

In May 1776, American privateers on the Franklin captured one thousand light dragoon carbines and other cargo aboard a British supply ship, the Hope, near Boston Harbor. Carbines—a short, lightweight, smaller-caliber smoothbore shoulder arm—were intended for use by cavalry, artillery, and other units that fought or moved on horseback. George Washington ordered that the captured firearms be sent to the army in New York, which was preparing to defend the city from a British invasion and badly in need of arms and other supplies. These carbines were not as durable as the Brown Bess musket, and American troops frequently turned in damaged carbines for repairs at the Continental arms factories. American armorers altered this Pattern 1756 light dragoon carbine with a new cherry stock, new ramrod, and distinctive French-style brass barrel bands. 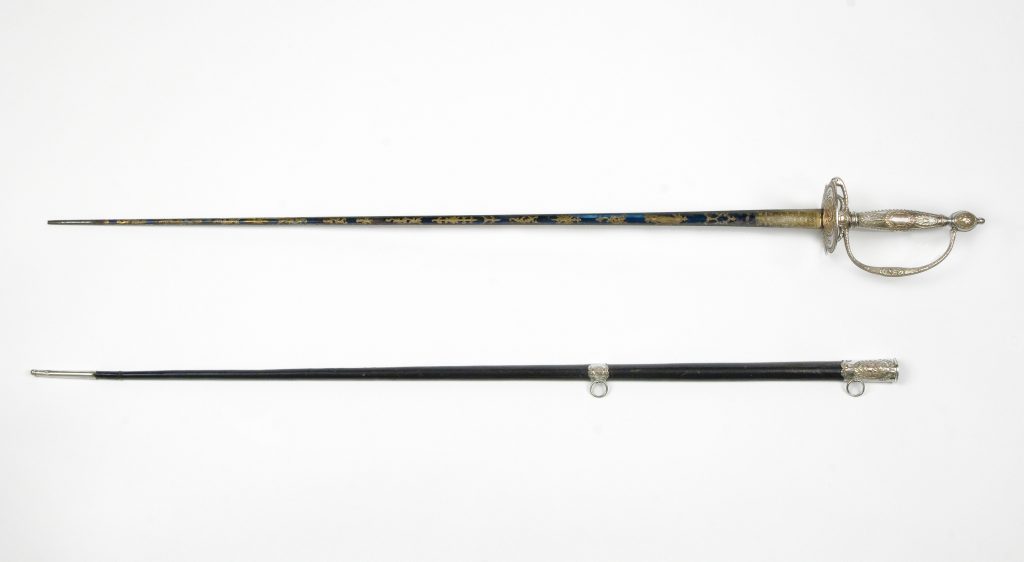 Tench Tilghman (1744-1786), born into a wealthy family of Talbot County, Maryland, and a Philadelphia merchant before the Revolution, was George Washington’s longest-serving aide-de-camp, from August 1776 to November 1783. When the allied Siege of Yorktown ended in October 1781, Washington chose Tilghman to carry to the Continental Congress the official news of Cornwallis’s surrender. Washington also asked Congress to honor his aide’s long and faithful service. On October 29, 1781, Congress awarded Tilghman a sword, as well as a horse, “in testimony of their high opinion of his merit and ability.” This sword is one of fifteen voted by Congress to officers of the Revolution. The elegantly decorated small sword has a brilliantly blued triangular blade and a gold-and-silver hilt bearing the Great Seal and other patriotic motifs, along with an inscription recording the recipient and date of Congress’s resolution. The sword and accompanying scabbard were made in Paris shortly after the war under the supervision of David Humphreys—another of Washington’s aides-de-camp. Tilghman died in Baltimore in 1786, one month before Secretary of War Henry Knox sent the sword to his widow.
The American Revolution Institute