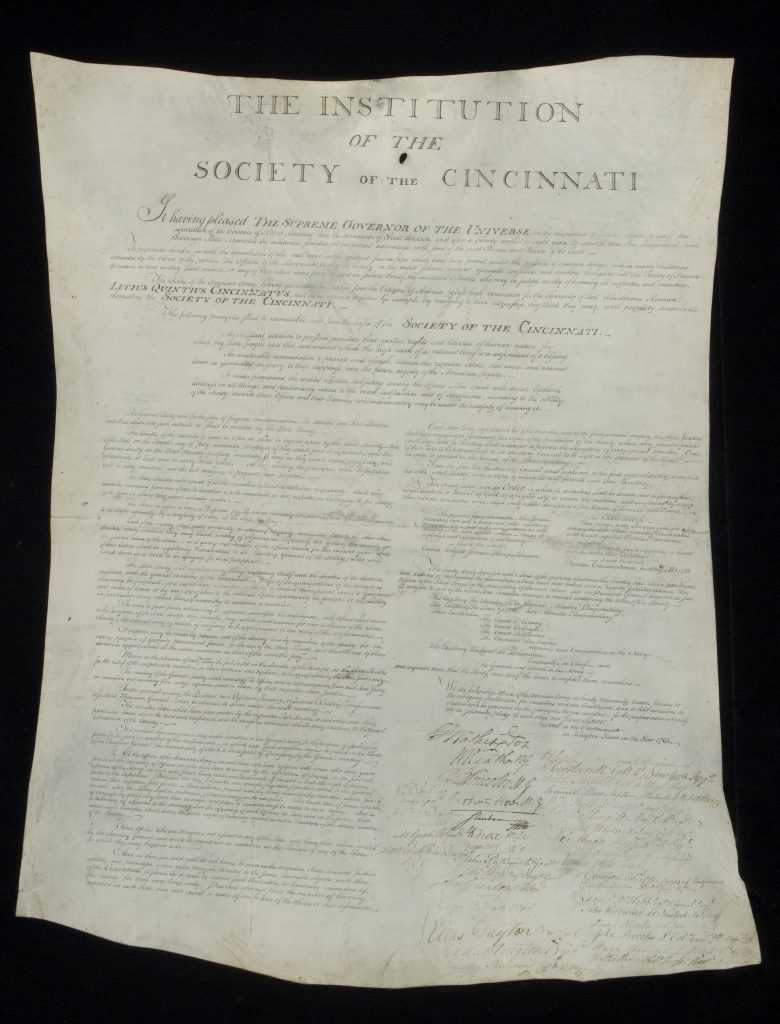 The Society of the Cincinnati’s original 1783 Institution, signed by George Washington and thirty-five other Continental Army officers, went on public display for the first time in 2008 as part of the Society’s 225th anniversary exhibition, The Secret History of the Society of the Cincinnati. In preparation for its six-month exhibition, the large parchment manuscript was painstakingly cleaned, mended and stabilized by Christine A. Smith, a leading specialist in animal-skin documents. Because of the Institution’s priceless value, Ms. Smith conducted the conservation work at the Society’s headquarters, Anderson House, so the document did not leave our custody. Capers Walter McDonald, a member of the Society of the Cincinnati of Maryland, generously funded the conservation treatment and the construction of a special archival box to permanently house the Institution. In addition, a special exhibition case was designed and constructed for secure display of the Institution while it was on public exhibition.

On May 13, 1783, a group of Continental Army officers gathered at Mount Gulian, General Steuben’s headquarters across the Hudson River from Newburgh, to finalize and adopt the Institution that formally established the Society of the Cincinnati. Within a week of their meeting, a copy of the text of the Institution was engrossed on a large sheet of parchment. A committee of three officers—Generals Heath, Steuben and Knox—was appointed to deliver the Institution to General Washington and “request him to honor the Society by placing his name at the head of it.” Washington signed the Institution first, and his signature is followed by those of the several officers in and around Newburgh who were involved in the Society’s founding in the late spring of 1783. At least one signature was added later—that of Maj. Gen. Nathanael Greene, who remained in command in the South through the summer of 1783, appears in the left margin.

Christine Smith’s initial examination of the Institution revealed that the parchment had been prepared for the calligrapher with a thin layer of whitewash that was causing the ink, especially in the area of the signatures, to flake. She determined that the unusual shield-like shape of the document had been deliberately cut, and she found evidence of marks that suggested the Institution had been tacked to a table or a wall, perhaps as it was being prepared or was subsequently displayed by the Society. The cleaning of the document was conservative and cautious to preserve evidence of its handling and use going back to the founding generation. (Patterns of accumulated dirt on the verso of the parchment indicate that the document was kept folded for a period of time.)

The Institution has been the Society’s property since the time of its creation in May 1783. Initially the Institution was housed with the Society’s other early papers in a document box made in Philadelphia by Thomas George and Daniel King, Jr., in 1787. For more than a century, the Institution was part of the archives that were in the custody of the Society’s succession of secretaries general, who would have probably kept them in their homes or offices. At the Society’s Triennial Meeting of 1911, a member raised concerns about putting “such responsibility” on individual officers for the safekeeping of these valuable papers. A special committee was appointed to look into the matter, which subsequently made arrangements to inventory the archival collection and transfer it to the Lincoln Safe Deposit and Storage Company in New York City.

The Institution and other early Society papers remained in storage in New York until 1930, when they were transferred to the Division of Manuscripts of the Library of Congress in Washington, D.C. At that time, the receipts indicate that the Institution was housed rolled in a cylindrical metal container. The collection remained on deposit at the Library of Congress, with access to researchers granted by special permission of the Society, until November 1973, when Secretary General Stephen Caldwell Millett arranged for its return to the Society’s custody at Anderson House. At that time, the Institution was flattened, placed in a large archival portfolio and stored in a map case in the library vault. Its twenty-first-century conservation treatment and new housing assure the survival of this landmark document for generations to come.

Read the Full Text of the Institution 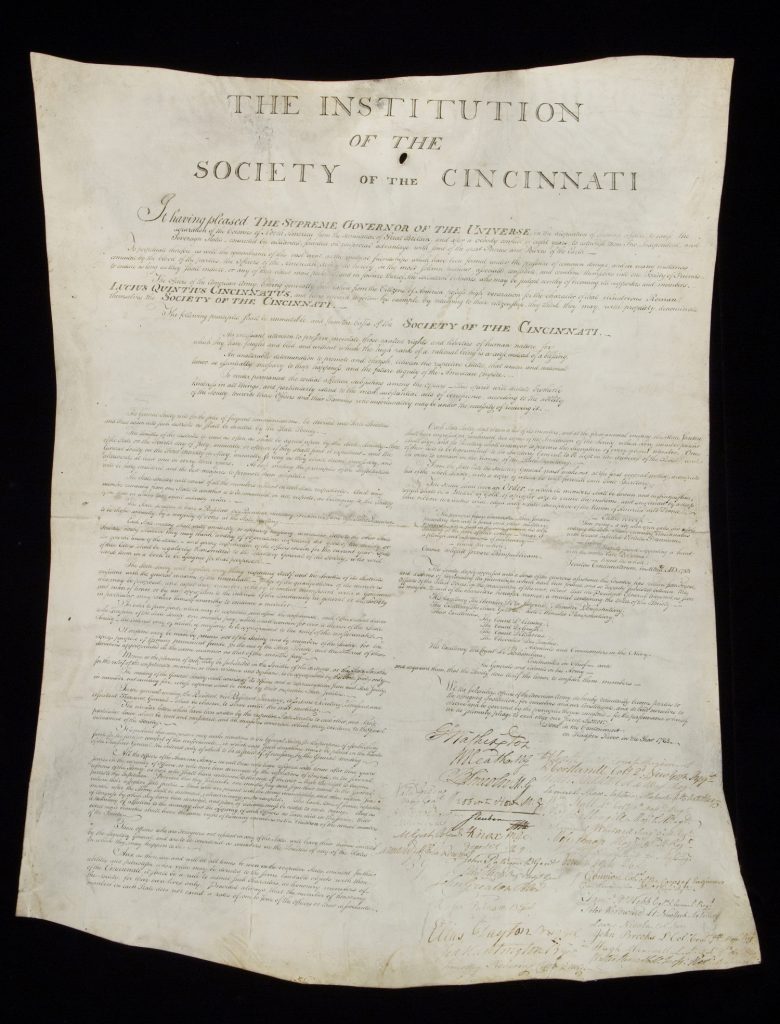 Written in iron-gall ink on parchment, the Society of the Cincinnati's original Institution was conserved in the fall of 2007. 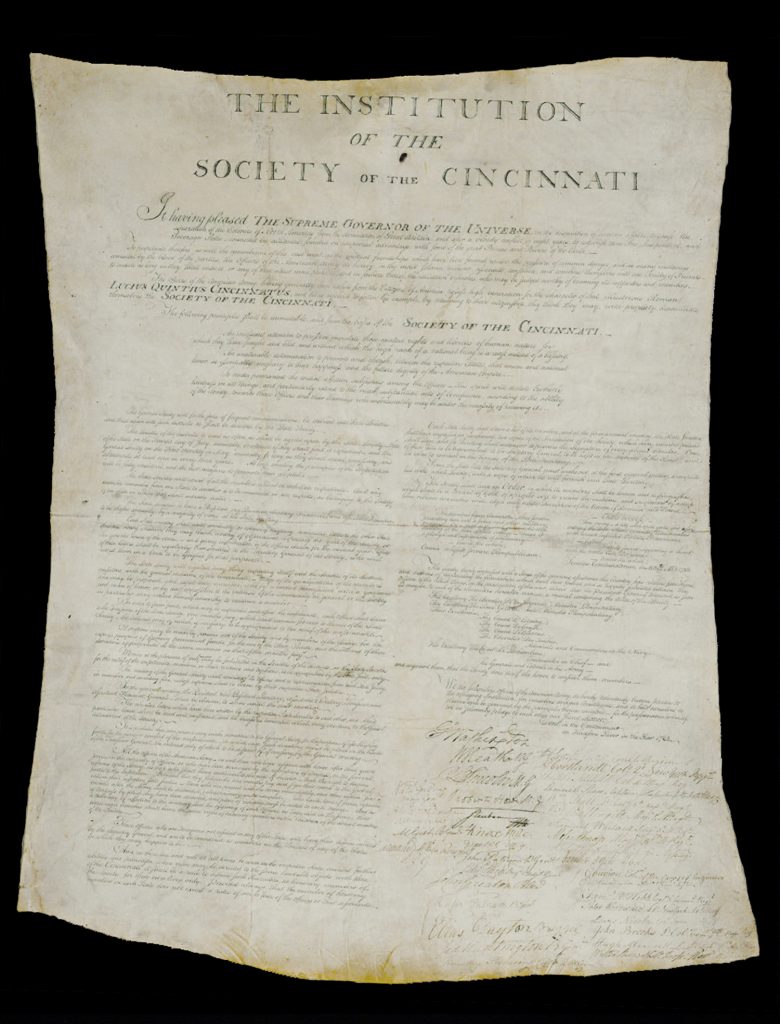 The Society's founding document needed to be cleaned, mended and stabilized. 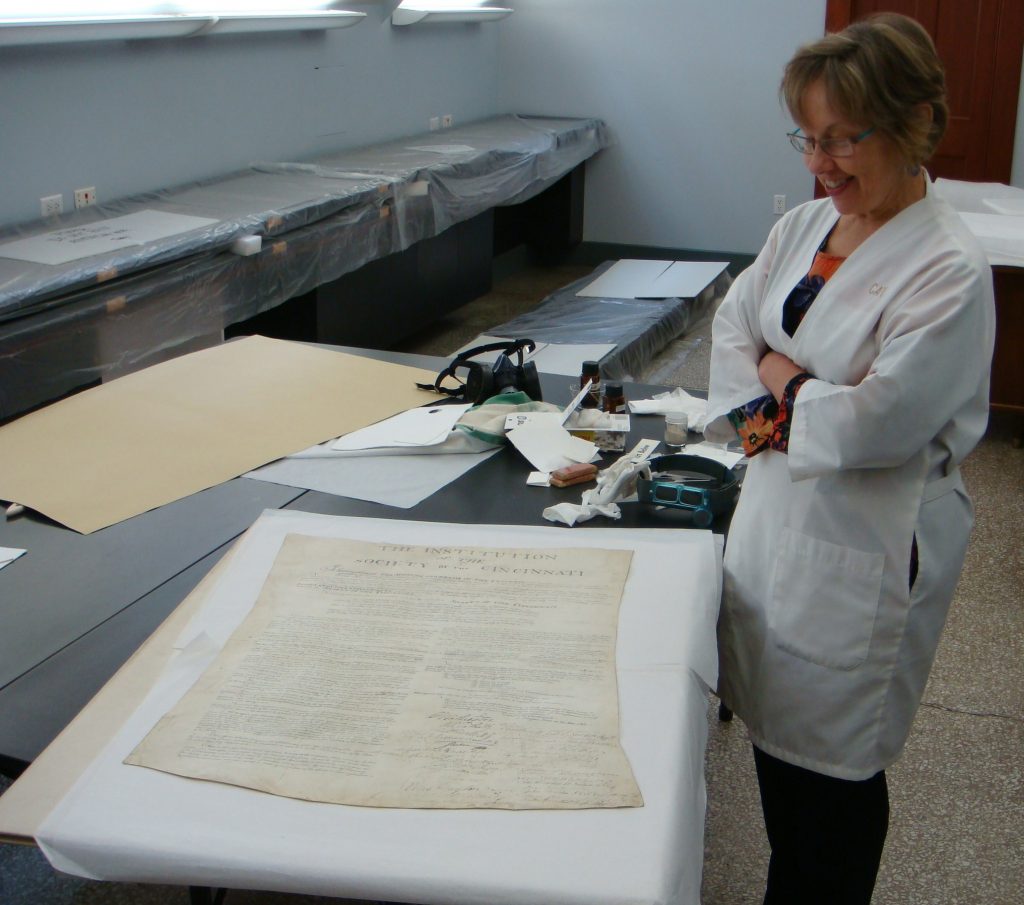 Christine Smith, a leading specialist in the conservation of parchment documents, worked in a conservation lab at Anderson House that was specially outfitted for the treatment of the Society's original Institution. 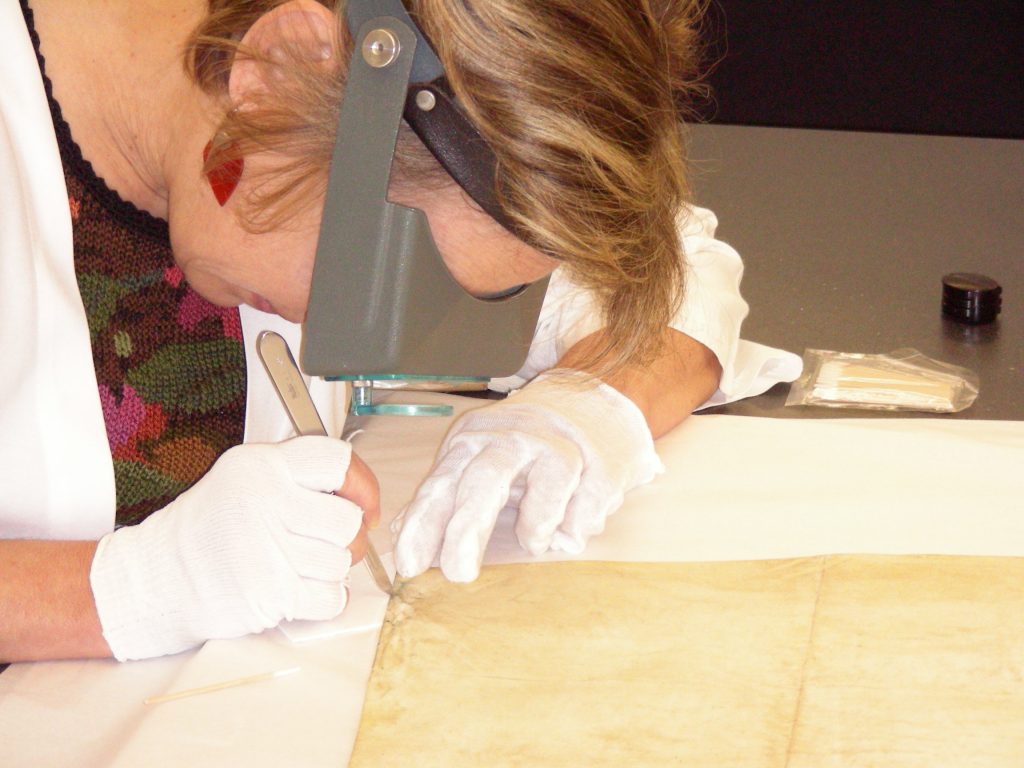 Christine Smith repairs the lower edge of the Institution during the conservation work. 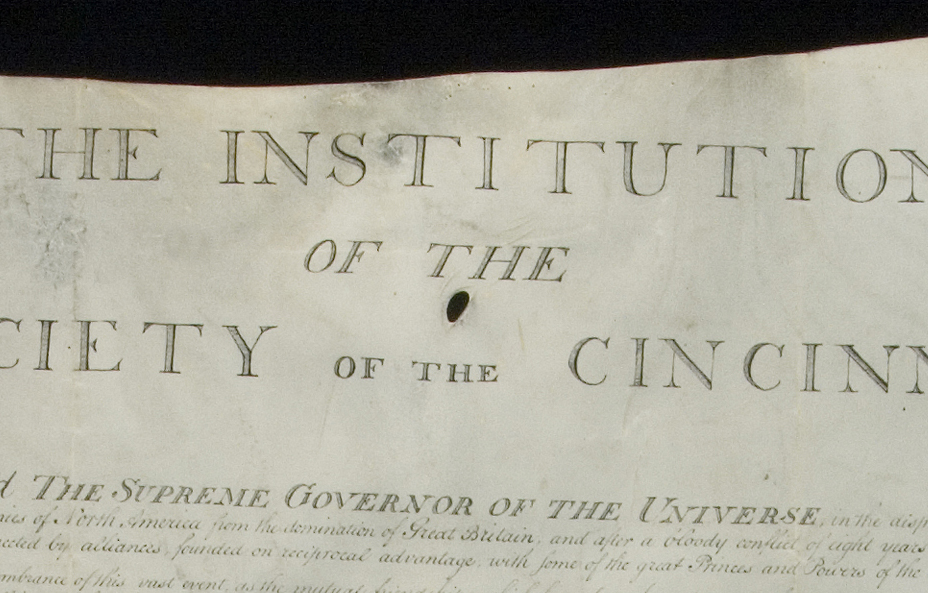 The hand-lettered title of the Institution shows a natural flaw (small hole) in the original parchment. 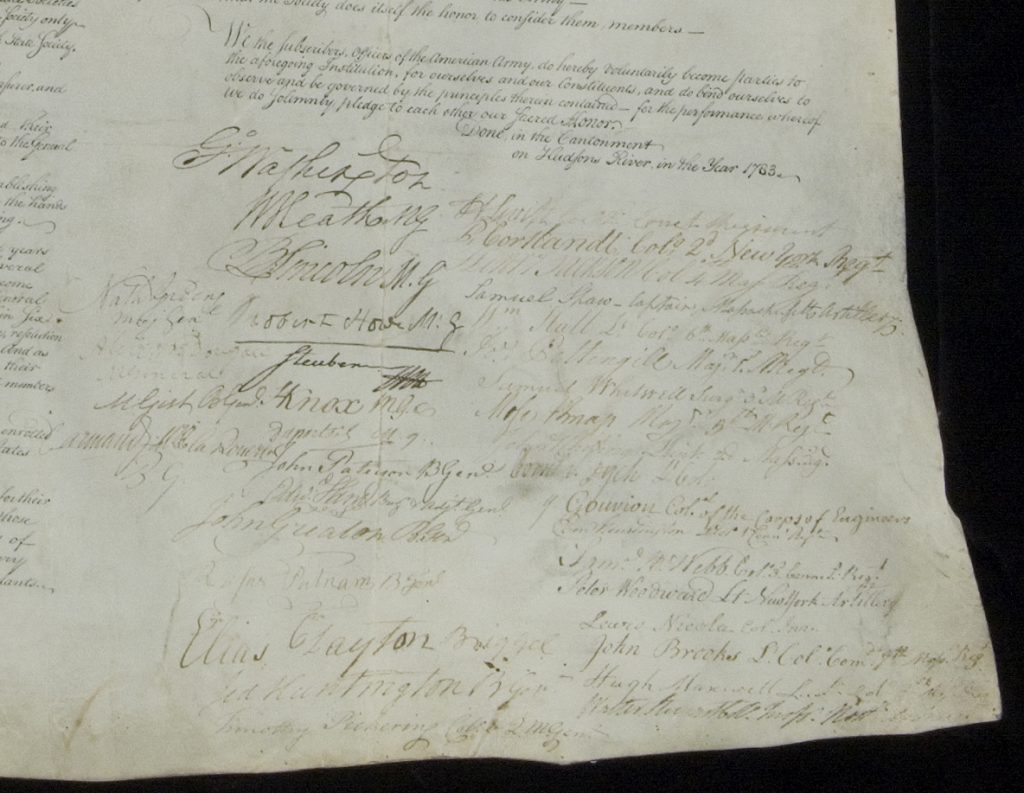 This detail of the signatures of George Washington and thirty-five other Continental Army officers in the lower right corner of the document shows some of the loss of ink due to wear and the flaking of the original layer of whitewash. 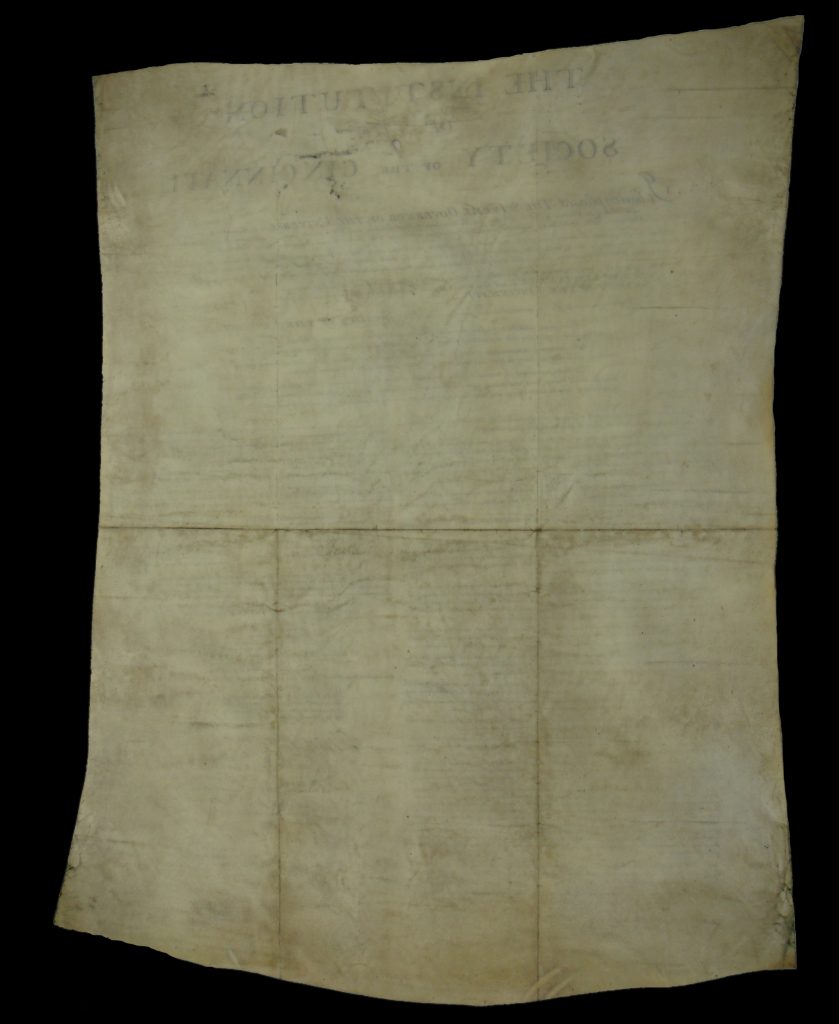 Reverse side after conservation

The reverse side of the Institution, seen here after treatment, shows evidence of the document having been stored folded in an earlier period. It also reveals the original darker color of the parchment, as the reverse was not treated with whitewash as the front was.