This hanger, or short sword, was carried during the Revolutionary War by James Taylor of Pelham, Massachusetts. It was made by an unidentified American cutler, ca. 1750-1775.

Weapons used to wage the Revolutionary War—important resources for understanding how the war was fought and what its soldiers and sailors experienced—are among the most treasured objects in the Institute’s collections. In May 2020 the Institute added to its holdings a rare American-made hanger owned by Massachusetts minute man James Taylor, who carried the sword through the early days of the Revolutionary War.

A native of Pelham in western Massachusetts, James Taylor (d. 1798) was an ensign in Capt. David Cowden’s company of minute men when it answered the Lexington Alarm—seventy-five miles east—on April 19, 1775. Cowden’s company marched as part of Col. Benjamin Ruggles Woodbridge’s regiment, which assembled men from five counties in western Massachusetts. Two weeks after the battles of Lexington and Concord, Taylor seems to have returned home, leaving the British threat under siege in Boston. By June 16, 1775, Ensign Taylor had rejoined his militia company in camp at Cambridge—once again under Colonel Woodbridge’s command. Early the next day, Woodbridge’s men marched across the Charlestown Neck, which was being bombarded by British ships in Boston Harbor, to reinforce American troops in the Battle of Bunker Hill. Part of Woodbridge’s regiment immediately rushed to the battlefield, while the others first went to fortify the streets of Charlestown. Cowden’s company was among the latter. We do not know how much action James Taylor saw as a minute man during these first battles of the Revolution, but his hanger sword was at his side from Pelham to Lexington, Cambridge and Bunker Hill, then home again.

Not much else is known about James Taylor’s life. He may have been among Captain Cowden’s men in August 1777—then part of the Fourth Hampshire Regiment—when they marched north to the Battle of Bennington. After six days’ service, the Hampshire minute men returned home. Taylor died in Pelham in 1798, leaving his wife, Abiah, and at least one child. His sword remained at the Taylor house into the twentieth century, before being purchased by collectors. 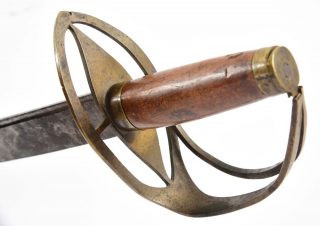 The brass hilt features a four-slot pierced guard and two outward branches on the side of the knuckle bow, as well as a cherry grip.

During the Revolutionary War, infantrymen carried a hanger—a type of short sword, with a blade about twenty-five inches long—as a secondary weapon to supplement their musket in close combat. James Taylor’s hanger was made by an unidentified Massachusetts cutler in the two decades leading up to the war. Its relatively simple form was typical of hangers produced for enlisted men and noncommissioned officers. The brass hilt design borrowed features from a popular mid-eighteenth-century British pattern, particularly the four-slot pierced guard and the two outward branches on the side of the knuckle bow. The outermost branch is broken away, probably because it caught on the soldier’s coat while marching. (The two other extant examples of this hanger have the same break.) The blade of Taylor’s hanger was made in America along with the hilt—a rare combination when most eighteenth-century American swords were produced by adding a locally made hilt to an imported blade. Although the identity of the cutler who made Taylor’s sword remains unknown, his work represents the advancements in American arms production that were spurred by the demands of the Revolutionary War.

See more information on this sword in the online museum collections database.