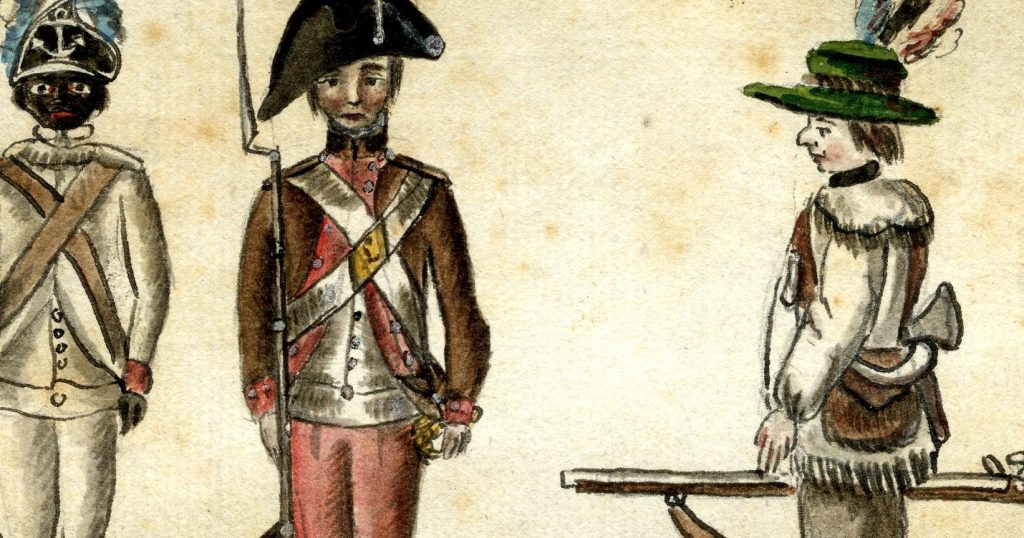 This lesson invites students to explore the experiences of a Revolutionary War solder, including items used and the challenges they faced.

One 50-minute class session, along with independent research time and presentation preparation.

Object Analysis: Divide students into four groups for a jigsaw activity using the thinking routine “See, Think, Wonder” to examine four objects (cartridge box, powder horn, canteen and bayonet) used by Continental soldiers during the Revolutionary War. Ask students to consider what they see, what they think about the object and what they wonder about the object? Students should then share what they learned or thought about each object, and predict the object’s use.

Image Analysis:  Students should analyze the Soldiers in Uniform watercolor drawn by a French officer featuring Patriot soldiers equipped with several of the items examined during the object analysis.  Have students share whether what they thought about the soldiers equipment was correct.  Discuss other parts of the soldier’s uniforms and equipment as time allows.

Text Analysis: Benjamin Rush, a well-known physician and civic leader, provided a manual detailing how soldiers should remain healthy while in service.  Students should read Directions for preserving the health of soldiers : recommended to the consideration of the officers of the Army of the United States and record three ways soldiers could maintain or improve their health.

Formative Assessment:  Students will take notes on what they learn about the objects, what life on the battlefield was like and what challenges the men faced.

Summative Assessment:  Students will research a Revolutionary War Soldier and create a short Flipgrid video sharing that soldier’s experience including the unit in which they served, where they served and what objects that person would have used in camp and battle.

Standard SS.Hist3: Wisconsin students will connect past events, people, and ideas to the present; use different perspectives to draw conclusions; and suggest current implications. 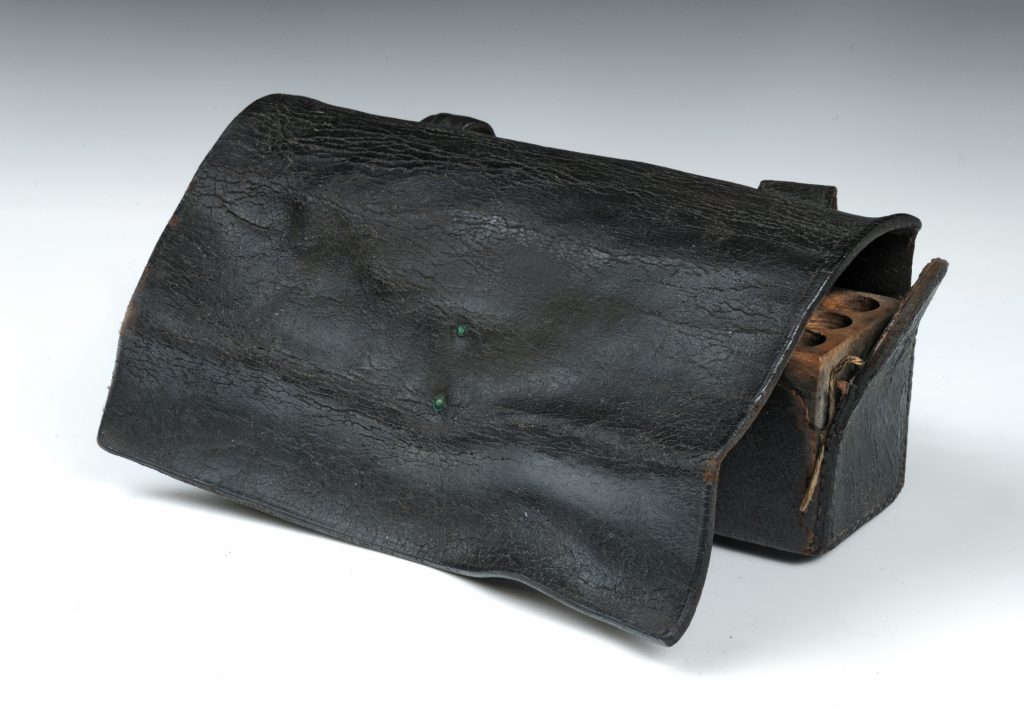 Early American musket cartridge box, late 18th-early 19th century. Rectangular pine cartridge block with 24 holes for .69-caliber musket cartridges set in a leather box and flap with a reconstructed brass catch and clasp. Belt loops are sewn to the back side of the leather box. One early paper cartridge remains in the box. 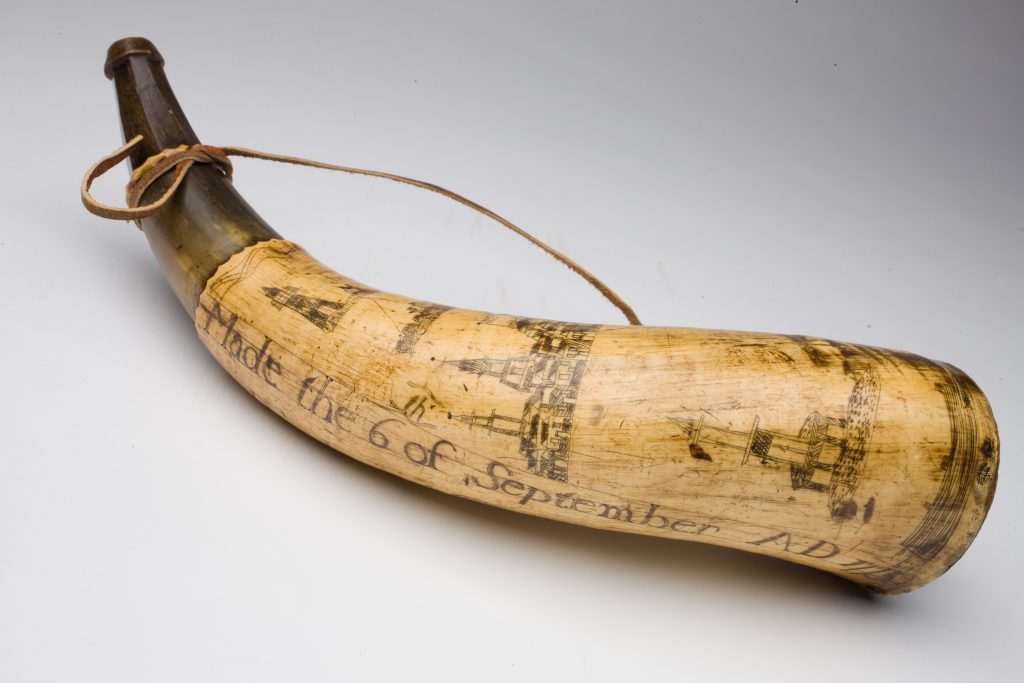 Engraved powder horn made by an unidentified professional carver for Thomas Kempton (1740-1806) of Massachusetts during the Siege of Boston in 1775. Scenes of Roxbury and Boston are engraved on the horn, including the Boston lighthouse, a fort flying the British flag (likely Castle William on an island in the harbor), Boston Neck, and buildings and barracks in Roxbury, including a meetinghouse. Inscribed in three rows: "Made the 6th of September AD 1775 / at Roxbury Camp for Captain / Thomas Kempton." On one end, the horn has a beveled spout with a fluted carved collar and a pegged plug (plug not present), and on the other end it is capped with a circular piece of wood nailed to the sides of the horn. 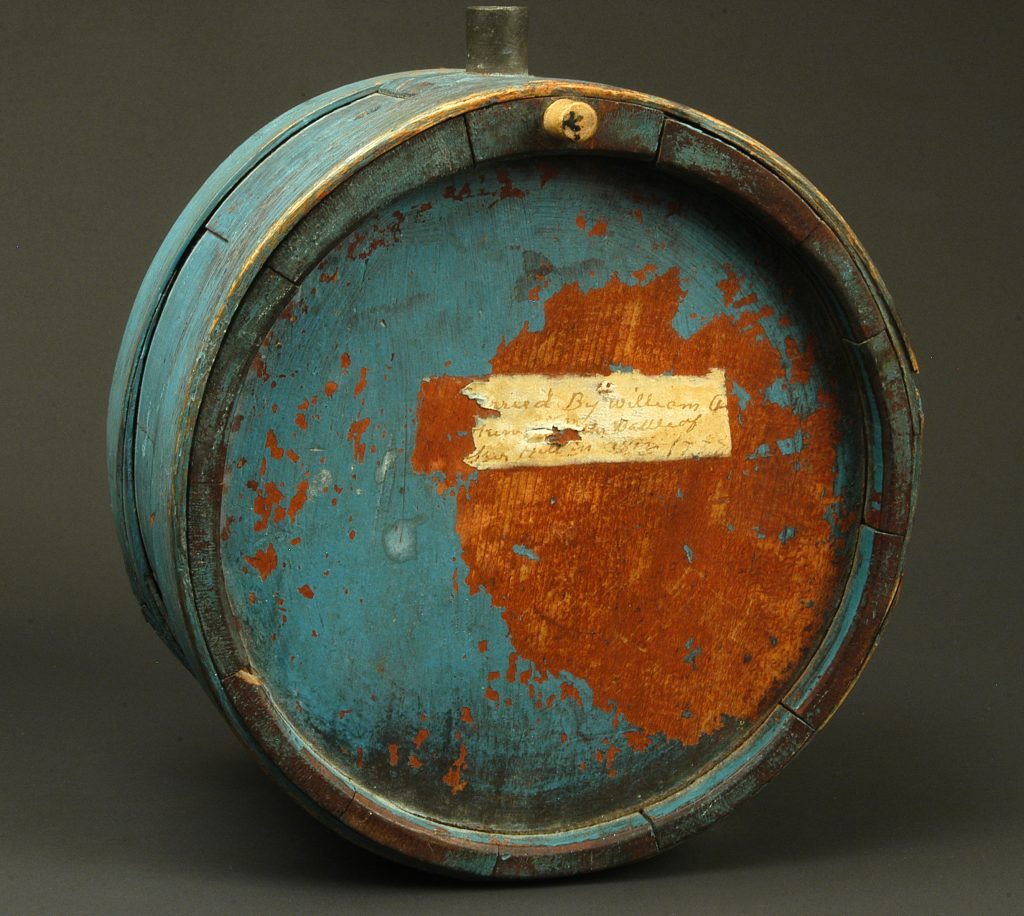 American stave canteen owned by William Adrian Hawkins (1742-1817), an officer in the New Hampshire Continental Line during the Revolutionary War, made in the late 18th century. Drum-style canteen with twelve wooden staves encompassed by two bent hickory straps, one with single fingering. Has an iron spout and nails and two wooden pegs. Painted blue, with areas of red paint visible underneath where the blue paint is missing. A partial paper label pasted on one side reads: "[Ca]rried By William A. / [Haw]kins d[ur]ing the Battle of / [Bun]ker Hill in 1812 1775." The handwritten ink inscription seems to have originally had the date 1812, which was later corrected to 1775 in graphite in a different hand.

Socket bayonet for the French Model 1766 infantry musket used during the Revolutionary War. L-shaped notch at socket for fitting onto musket, extends into a curved extension from which the blade protrudes. Triangular blade is flat on the back and at the front shaped from flat at sides, extending into a peak at the center. The blade is widest at the bottom by the curved extension and gradually decreases in width to the pointed end. An unidentified circular mark is stamped on the flat back side of the blade near the curved extension. 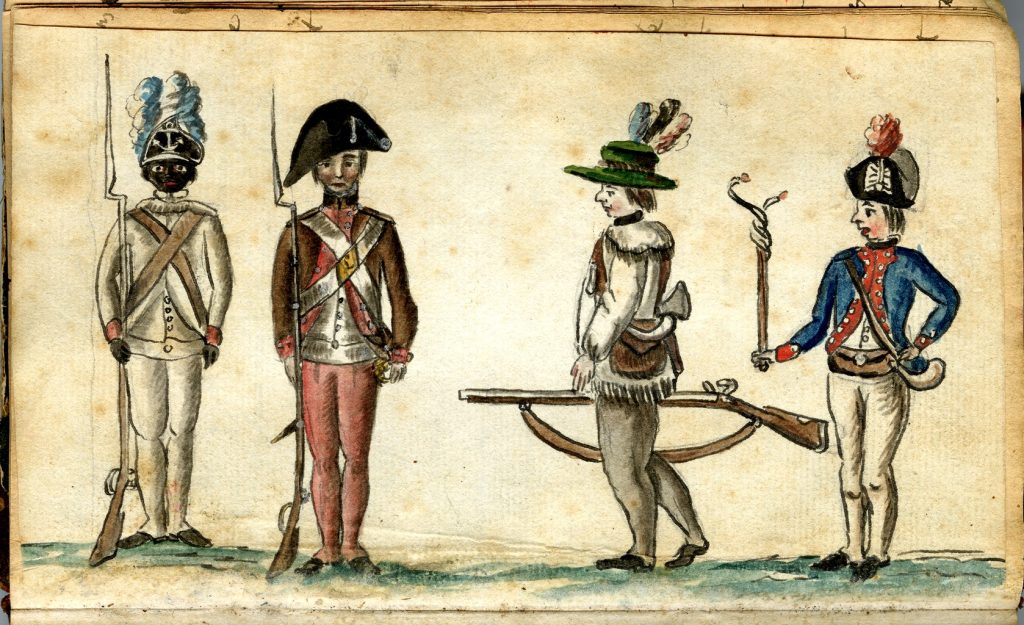 This watercolor was madee by a French officer who served with the combined American and French forces during the Yorktown campaign. Among the four soldiers depicted is an African American member of the First Rhode Island Regiment. 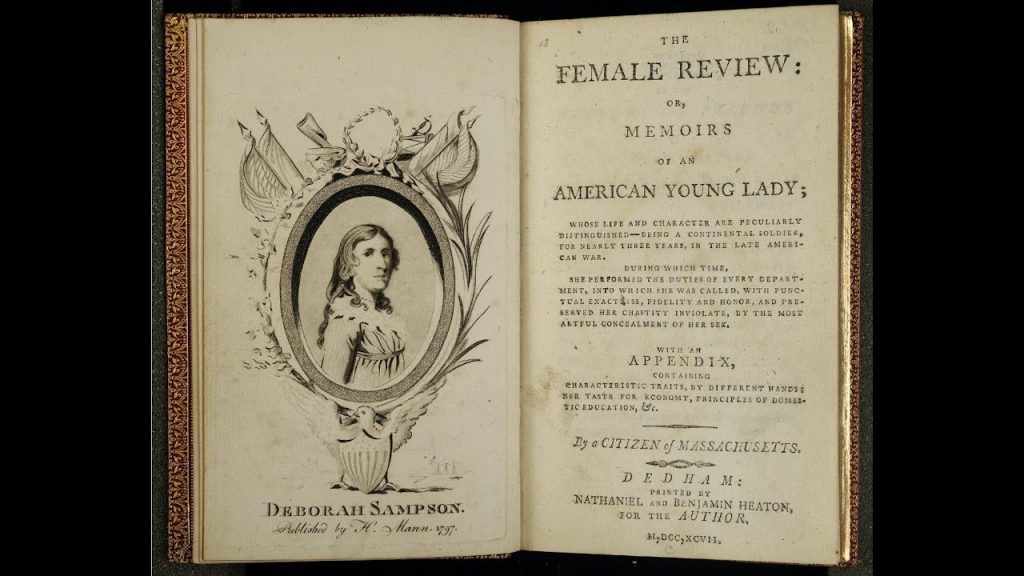 Click to play video segment.Research Services Librarian Rachel Nellis discusses "The Female Review: or Memoirs of an American Young Lady" by Herman Mann. In this 1797 biography, Mann explored the life of Deborah Sampson, a soldier in the Massachusetts Line and one of the first female pensioners of the American Revolution. Mixing fact with romantic inventions, this imaginative account of Sampson’s wartime service was published to support her case for a pension, which she first received in 1805. Sampson’s life and the creation of this book provide an interesting starting point for analysis of the treatment of enlisted soldiers and woman combatants after the war. 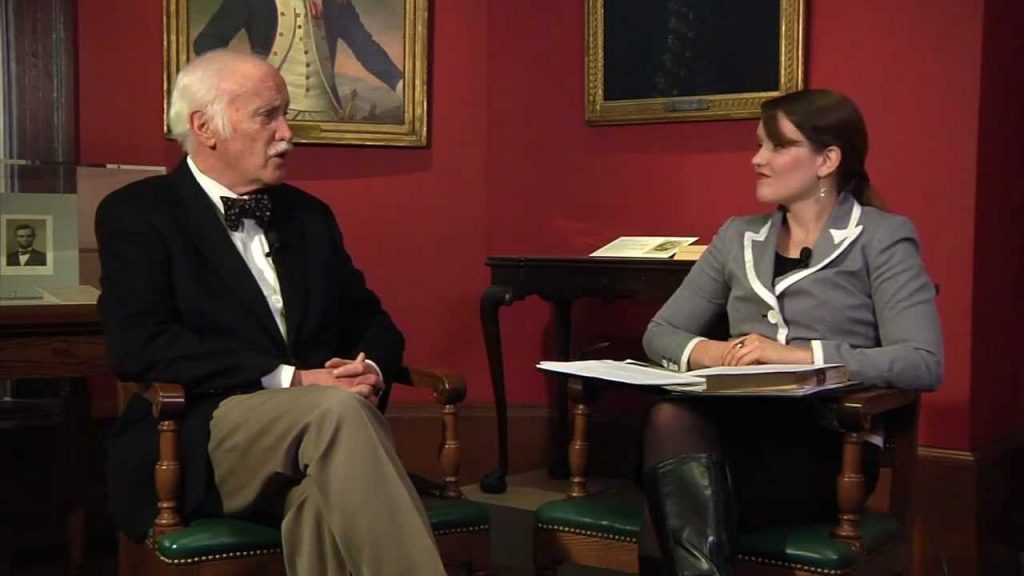 Hardships of the Continental Army, Part 2 of 7: "Tragedies and Hardships of 18th Century Warfare" 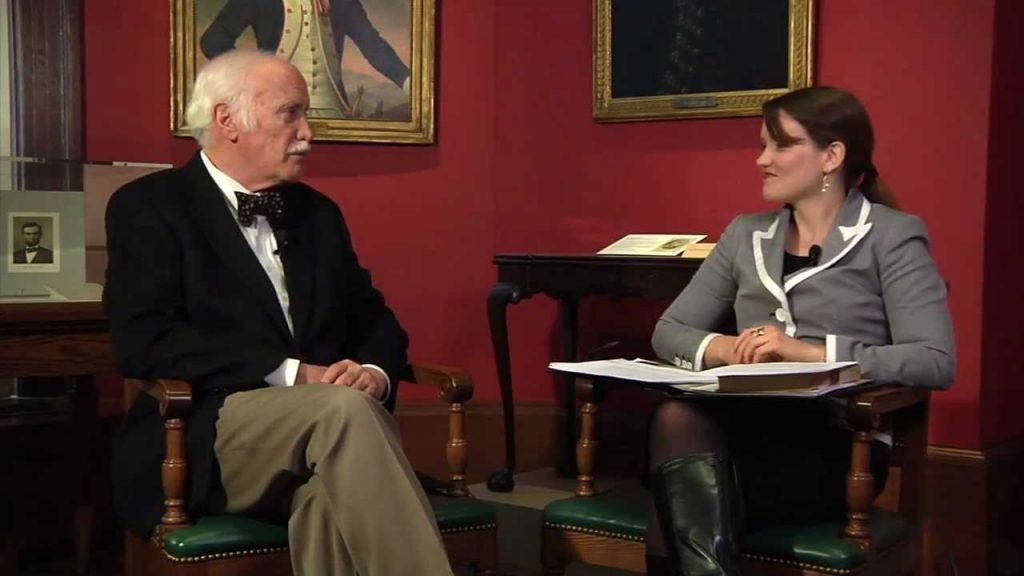 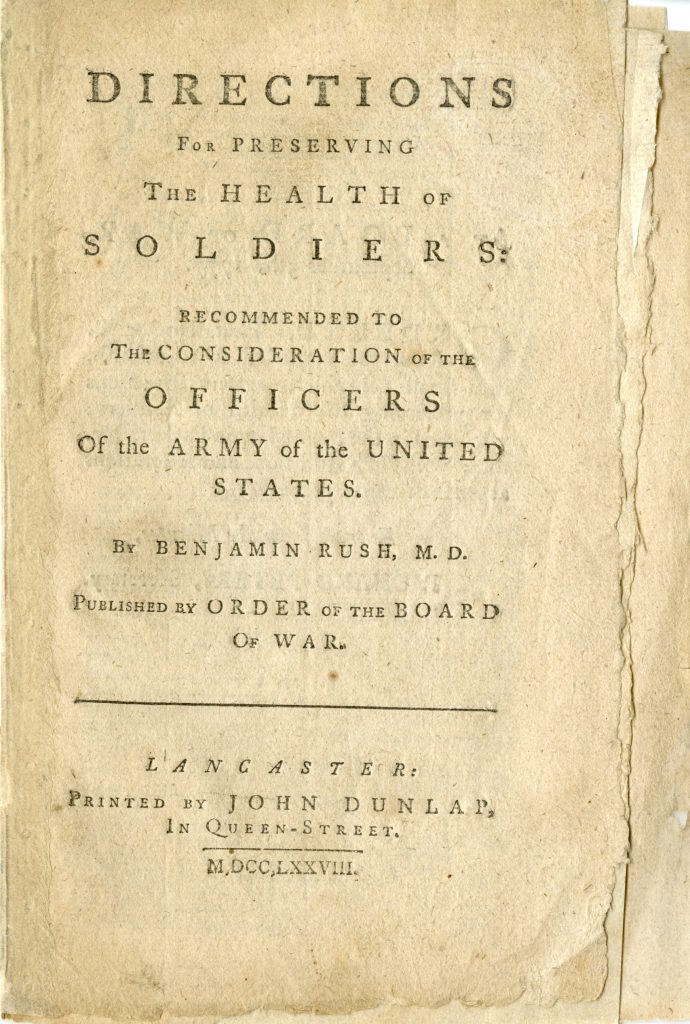 Directions for Preserving the Health of Soldiers: Recommended to the Consideration of the Officers of the Army of the United States

First published in The Pennsylvania Packet in 1777, Dr. Rush’s advice for soldiers was reissued as a pamphlet by order of the Board of War the following year. “Fatal experience has taught the people of America that a great proportion of men have perished with sickness in our armies than have fallen by the sword,” Rush wrote. “The art of preserving the health of a soldier consists of attending to the following particulars: I. DRESS. II. DIET. III. CLEANLINESS. IV. ENCAMPMENTS. And V. EXERCISE.”
The American Revolution Institute
Anderson House is Temporarily Closed