Revolutionary War maps range from hasty sketches of roads and paths to elaborate topographical charts depicting elevations, roads, streams and buildings. They were created to support and document military operations as well as to inform the public about the course of the war. These ten reflect the variety of fine maps created during the Revolutionary War and are distinguished for their detail.

By the late eighteenth century, military mapmaking had become a fine art. European military engineers were trained as cartographers, and many used pen, ink and watercolor to produce extraordinary manuscript maps. The maps of British engineer Charles Blaskowitz and French engineer Michel Capitaine du Chesnoy are among the finest military maps ever created.

American engineers generally lacked the training to produce sophisticated maps. As in other aspects of the art of war, they imitated European models and grew more proficient. By the end of the war, Continental Army engineer Sebastian Bauman was able to create a map of the Siege of Yorktown comparable to the best British and French military maps. Immensely proud of his accomplishment, Bauman oversaw the engraving and publication of the map and its distribution to the American and French officers who purchased it. A pristine copy of the the Bauman map is one of the special treasures of the American Revolution Institute.

In the list below we attribute the maps to the cartographers who created them, rather than to the publishers who printed and distributed them, except for Sayer and Bennett’s simple map of the Battle of Bunker Hill, for which the cartographer is not identified, and Jean Lattré’s 1784 map of the United States, for which the cartographic details were compiled from existing maps. For manuscript maps we indicate the date the maps were drawn. For published maps, we provide the publication date. British map publishers like William Faden sometimes published detailed maps of battles within a few months of the engagements, and issued revised versions as new information reached them.

The illustrations below are all details, offering important parts of much larger maps. Click on the link at the bottom of each entry to view the whole map in the digital library collection of the library in which it is found.

Daniel Paterson, Cantonment of His Majesty's Forces in N. America

This manuscript map was executed in ink and watercolor by British army cartographer Daniel Paterson in 1766, then updated to reflect the disposition of British troops in North America in the summer of 1767. It depicts the dilemma facing the British military in the decade following the French and Indian War, when it was responsible for maintaining royal authority across a continental empire. Most of the king’s troops were stationed in newly won Quebec and along the Lake Champlain-Hudson River corridor, with other units assigned to Nova Scotia, the Pennsylvania frontier, the Illinois Country, Pensacola and Mobile. Tiny detachments, in some cases less than half an infantry company, manned frontier posts in the Carolina and Georgia backcountry. As colonial resistance to imperial regulation and taxation moved toward rebellion, the British military presence was wholly inadequate to deal with increasingly militant colonists. 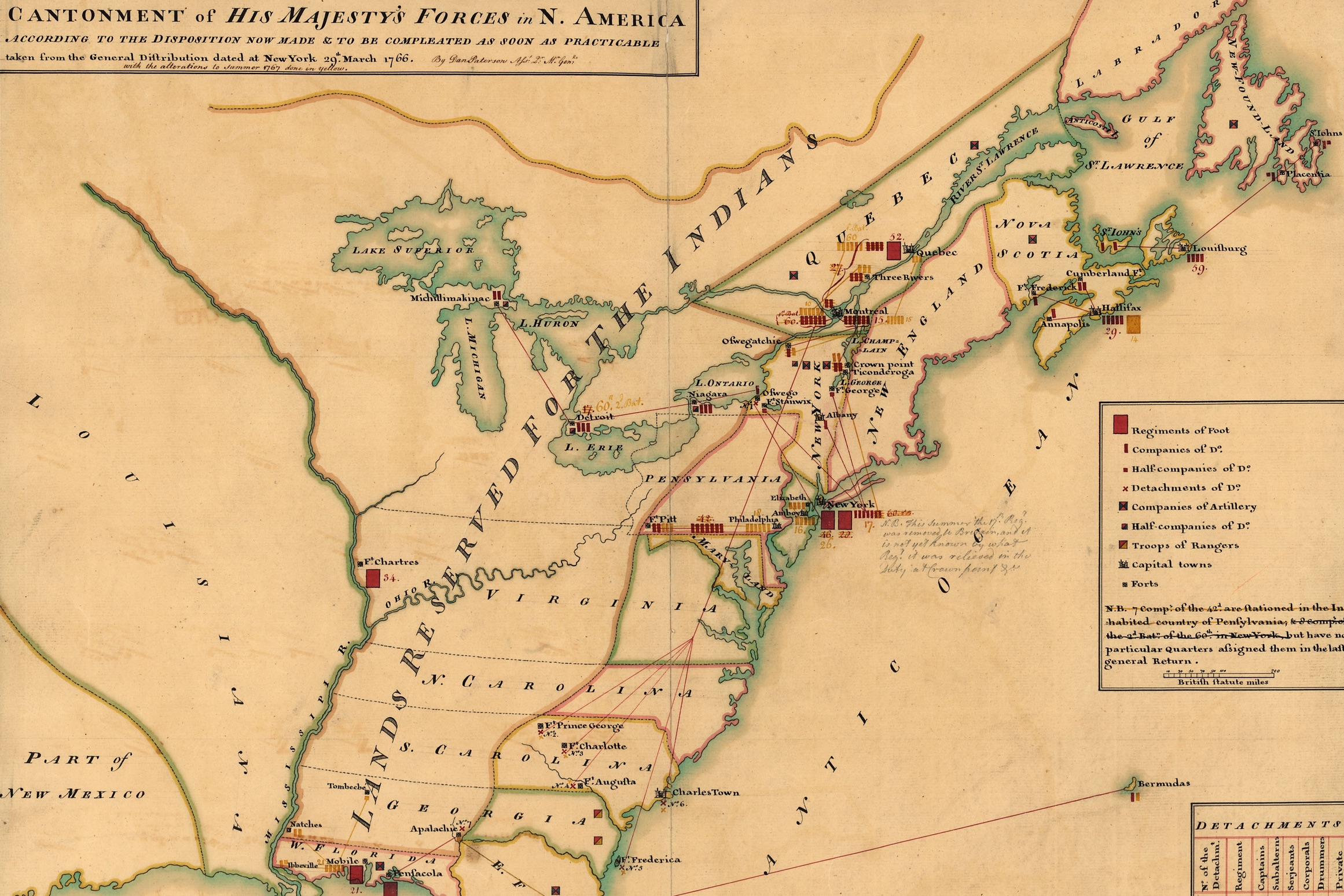 Robert Sayer and John Bennett, A Plan of the Battle, on Bunkers Hill

This is an outstanding example of a map produced for broad public consumption. Sayer and Bennett, who ran one of the largest print and map businesses in London, published this map five months after the Battle of Bunker Hill. Victory there cost the British over one thousand casualties, and led to the replacement of the British commander in Boston, Gen. Thomas Gage, with Gen. William Howe. Gage left Boston in October and arrived in London shortly before this map was published. His downfall was the talk of the city. The map occupies two-thirds of the print. The lower third is an eyewitness account of the battle, praising Howe, by Gen. John Burgoyne. 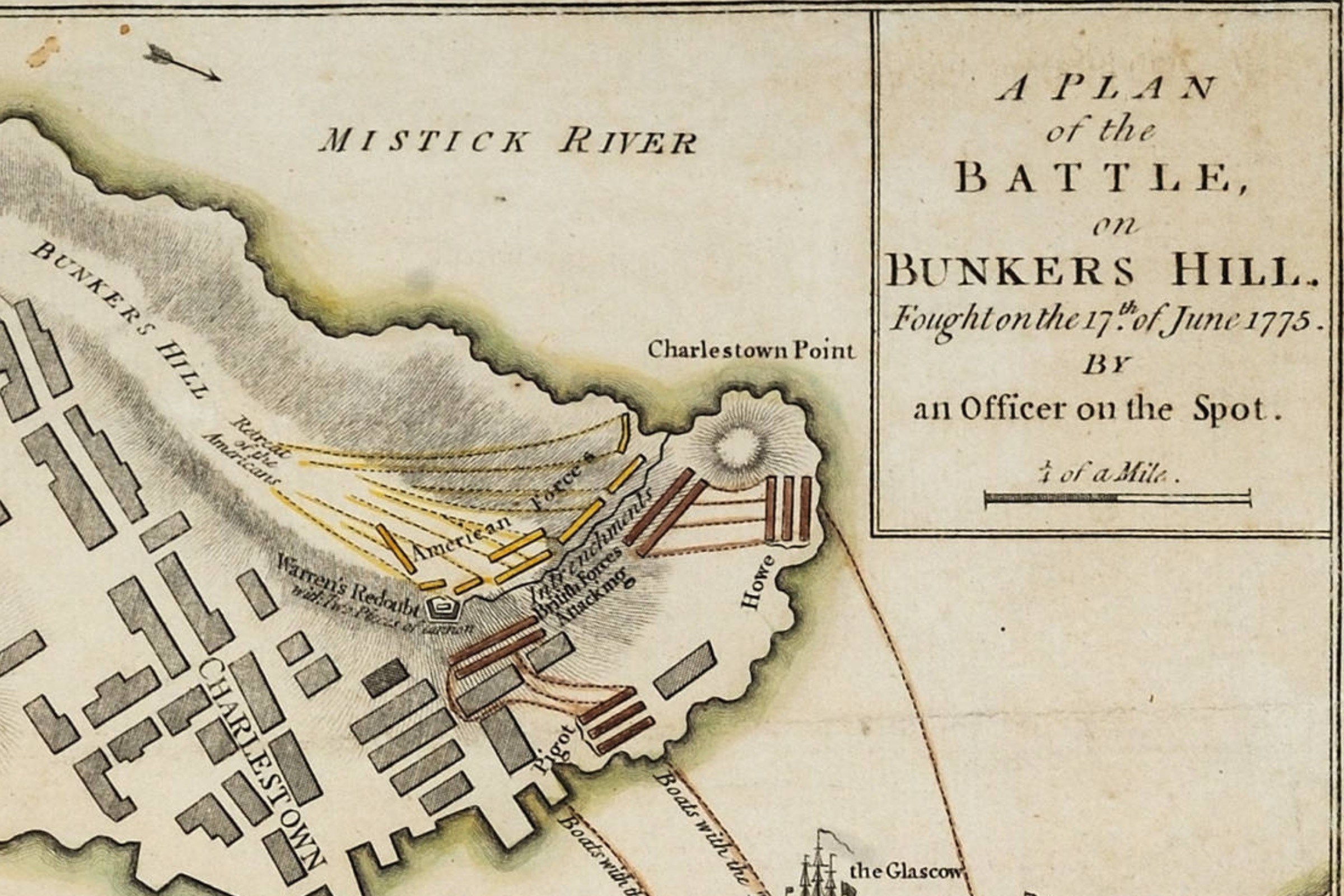 Andreas Wiederholdt, Sketch of the Engagement at Trenton

Andreas Wiederholdt was a lieutenant in the Fusilier Regiment von Knyphausen, one of the three Hessian regiments of Rall’s Brigade surprised by the attack of Washington’s army on December 26, 1776. Wiederholdt and some fifty other soldiers of his regiment swam the icy Assunpink Creek and escaped capture. He drew this map shortly after the battle to document the defeat. Washington’s army attacked from the north and after a brief, ferocious fight in the streets, forced the surprised Hessians into the open ground to the east, where they surrendered. This is the most detailed map of the battle by a participant. 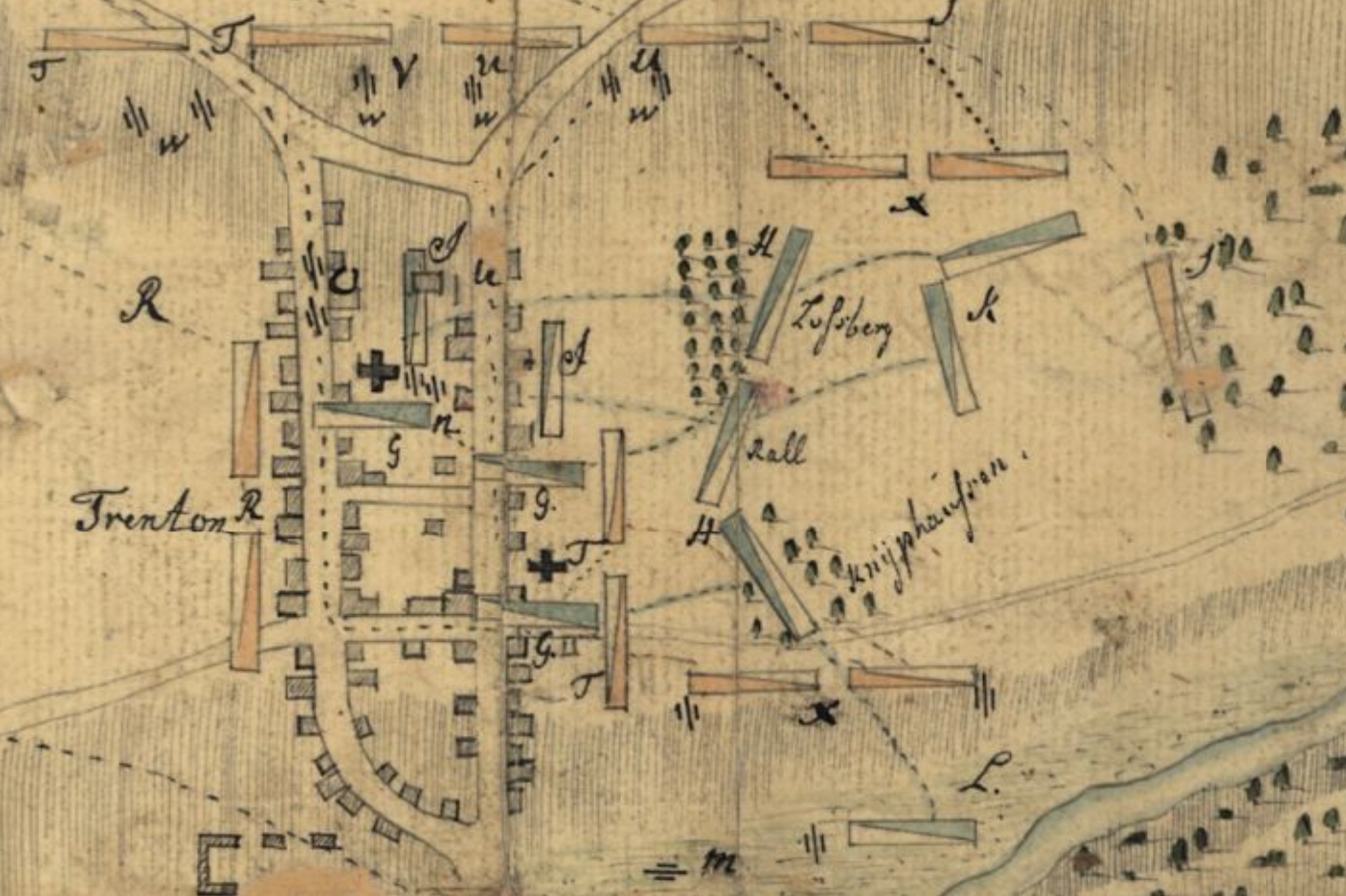 Friedrich Wilhelm Werner, Battle of Brandywine in which the Rebels were defeated

On September 11, 1777, the British army under Gen. William Howe outflanked Washington’s defensive position on Brandywine Creek in southeast Pennsylvania and defeated the Continental Army in a sprawling, hard-fought battle. Hessian Lt. Friedrich Werner drew a plan of the battle on which the London publisher, William Faden, based this map. Faden, who published detailed, large-format maps of many of the war’s important battles, issued a significantly revised version of this map in 1784, in which “Rebels” in the title is replaced with “Americans.” 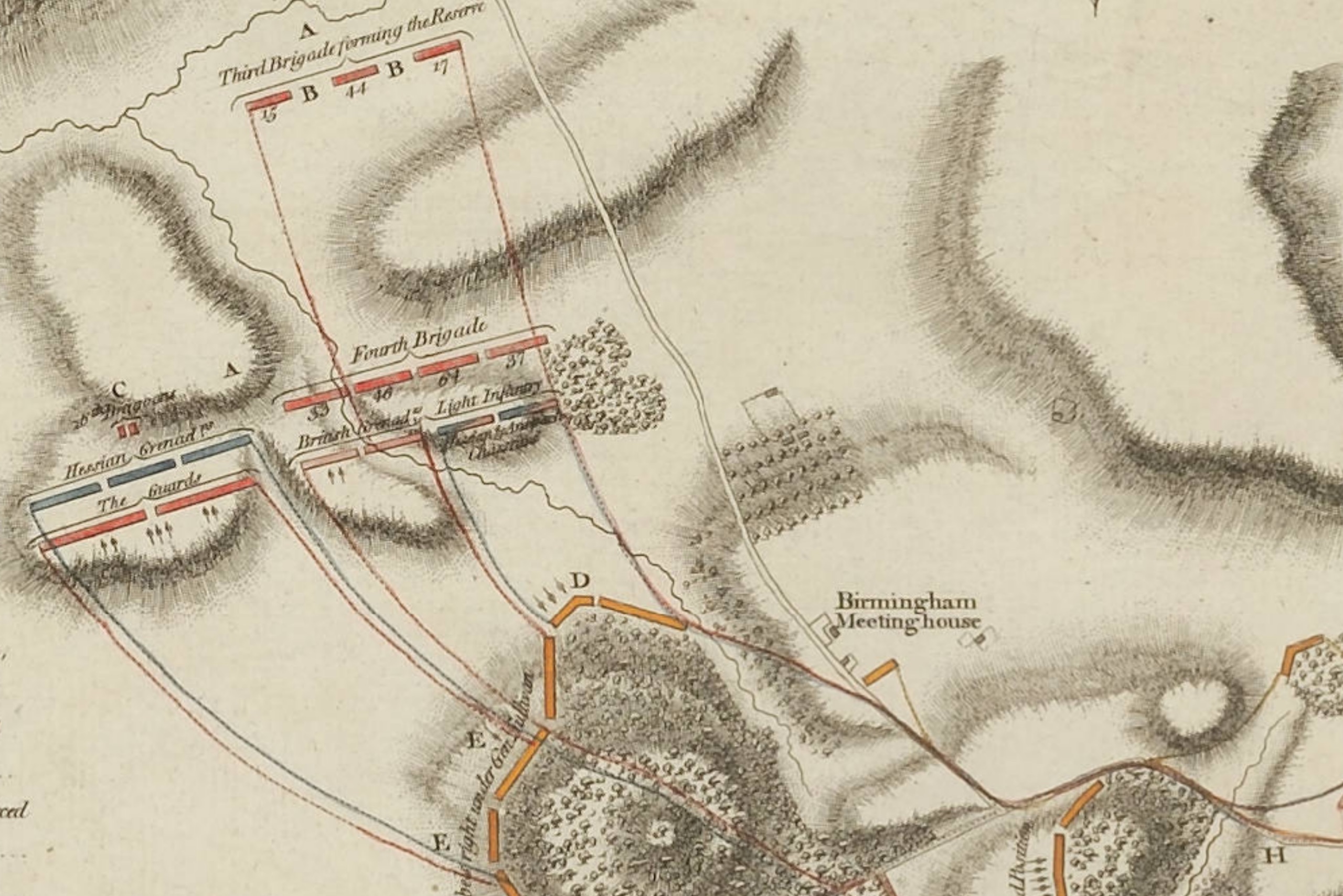 Charles Blaskowitz, A Topographical Chart of the Bay of Narraganset in the Province of New England

As part of a team of British engineers, Charles Blaskowitz surveyed Narragansett Bay in 1764. He returned in 1774 to add the farms and additional features, which made this map one of the most comprehensive British maps of the war, scarcely rivaled for topographical details. The British occupied Newport in December 1776. This version of the map was published by William Faden in London in 1777 and was used by British forces during the Battle of Rhode Island on August 29, 1778. Blaskowitz drew many of the finest British maps of the Revolutionary War. 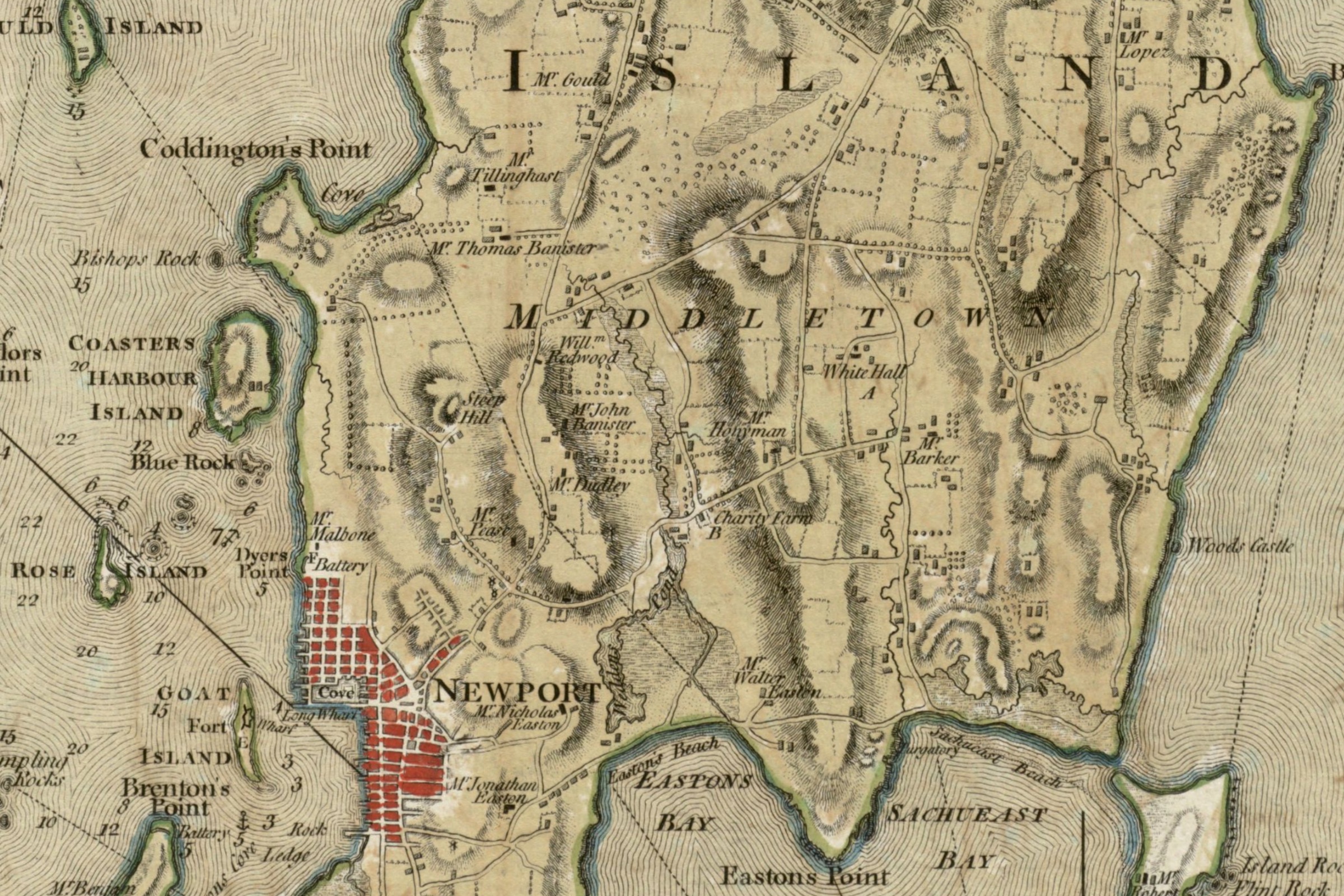 Thomas Hutchins, A New Map of the Western Parts of Virginia, Pennsylvania, Maryland, and North Carolina

For many Britons and Americans, the future of the vast inland empire stretching from Fort Pitt to the Mississippi River was a central issue in the war. British engineer Thomas Hutchins surveyed the region before the war and published this map in London in November 1778. That same year, Governor Patrick Henry of Virginia had dispatched George Rogers Clark to take control of the Illinois Country (marked in green), which had been acquired by Britain from France at the end of the French and Indian War. The Hutchins map, with notes documenting Indian villages and natural resources, is the most detailed English map of a region both sides in the Revolution coveted. 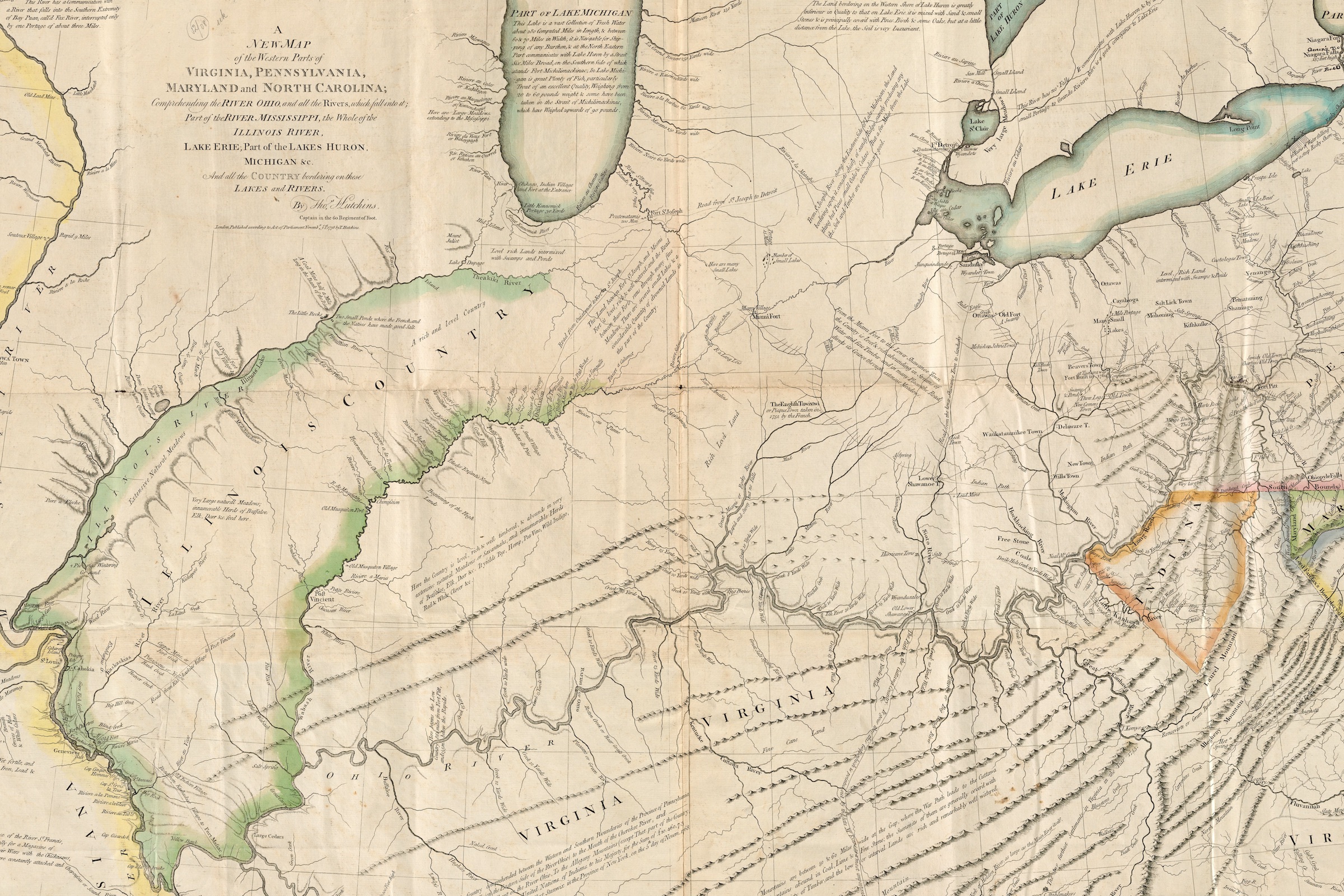 Antoine François Térence O'Connor, Plan of the Siege of Savannah

Drawn by Antoine O’Connor, Admiral d’Estaing’s chief engineer, this richly detailed manuscript map embellished with watercolors was prepared shortly after the French and American Siege of Savannah ended. The French began siege works (at lower right) from which they bombarded the town, but abandoned siege tactics and organized a frontal assault on the Spring Hill Redoubt (at upper left) on October 9. D’Estaing was wounded and Casimir Pulaski, commanding the American cavalry, was killed. Nearly one thousand other French and American soldiers were killed, wounded or captured in the attack. The allies retreated, leaving the British in control of Savannah. 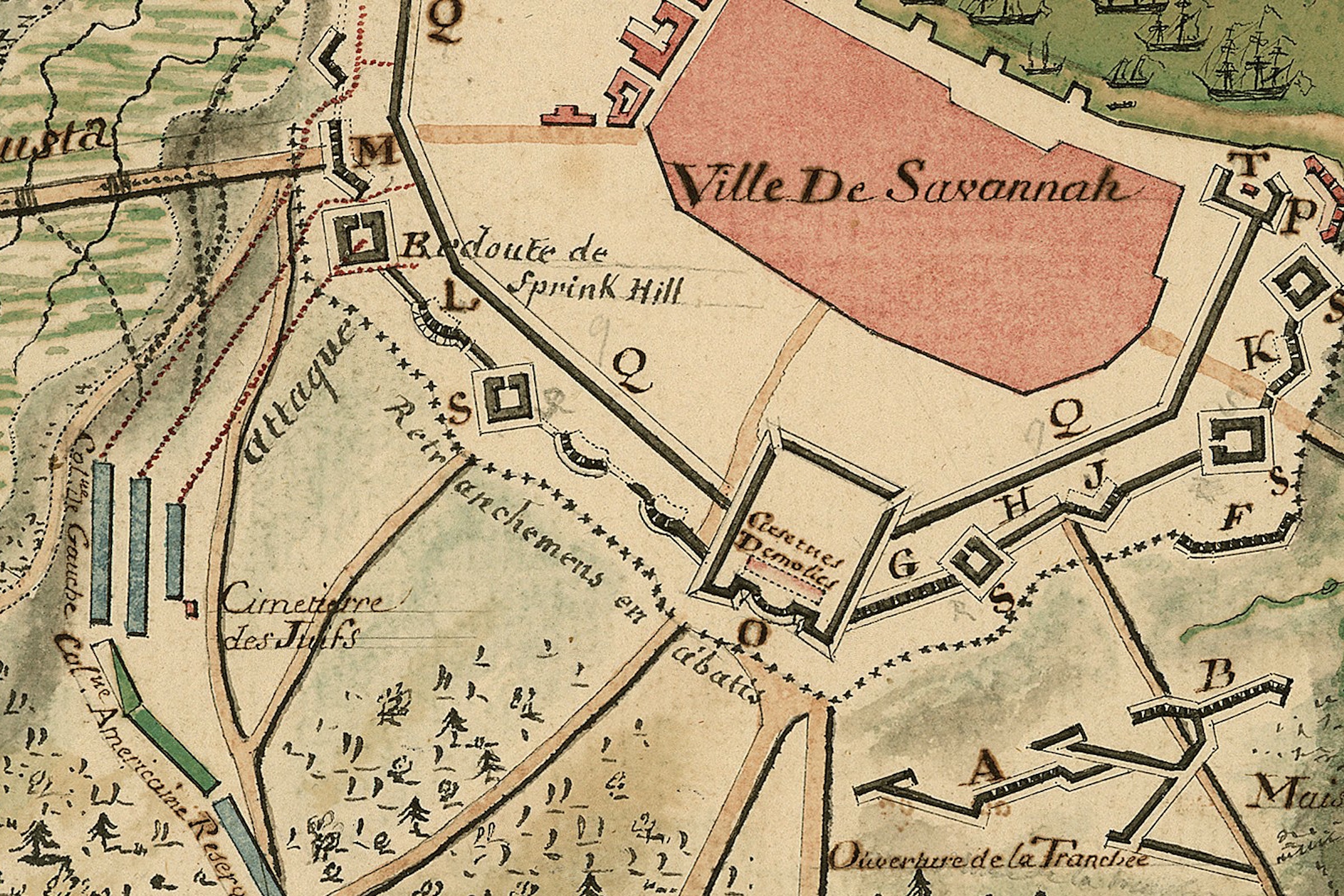 Lafayette instructed his staff cartographer, Michel Capitaine du Chesnoy, to prepare this map depicting the theater of war in the northern states as a tool to help him persuade the French ministry to send an expeditionary force to support Washington’s army. Capitaine compiled the topographical features from other maps and added details documenting the course of the war to date. He accompanied Lafayette to France in 1779 where Lafayette presented a manuscript version to King Louis XVI. The map was engraved under the direction of cartographer Jean-Baptiste Fortin and sold in Paris in 1780, about the time Rochambeau’s army departed for America. Capitain returned to America with Lafayette and drew some of the finest maps of the Revolutionary War. 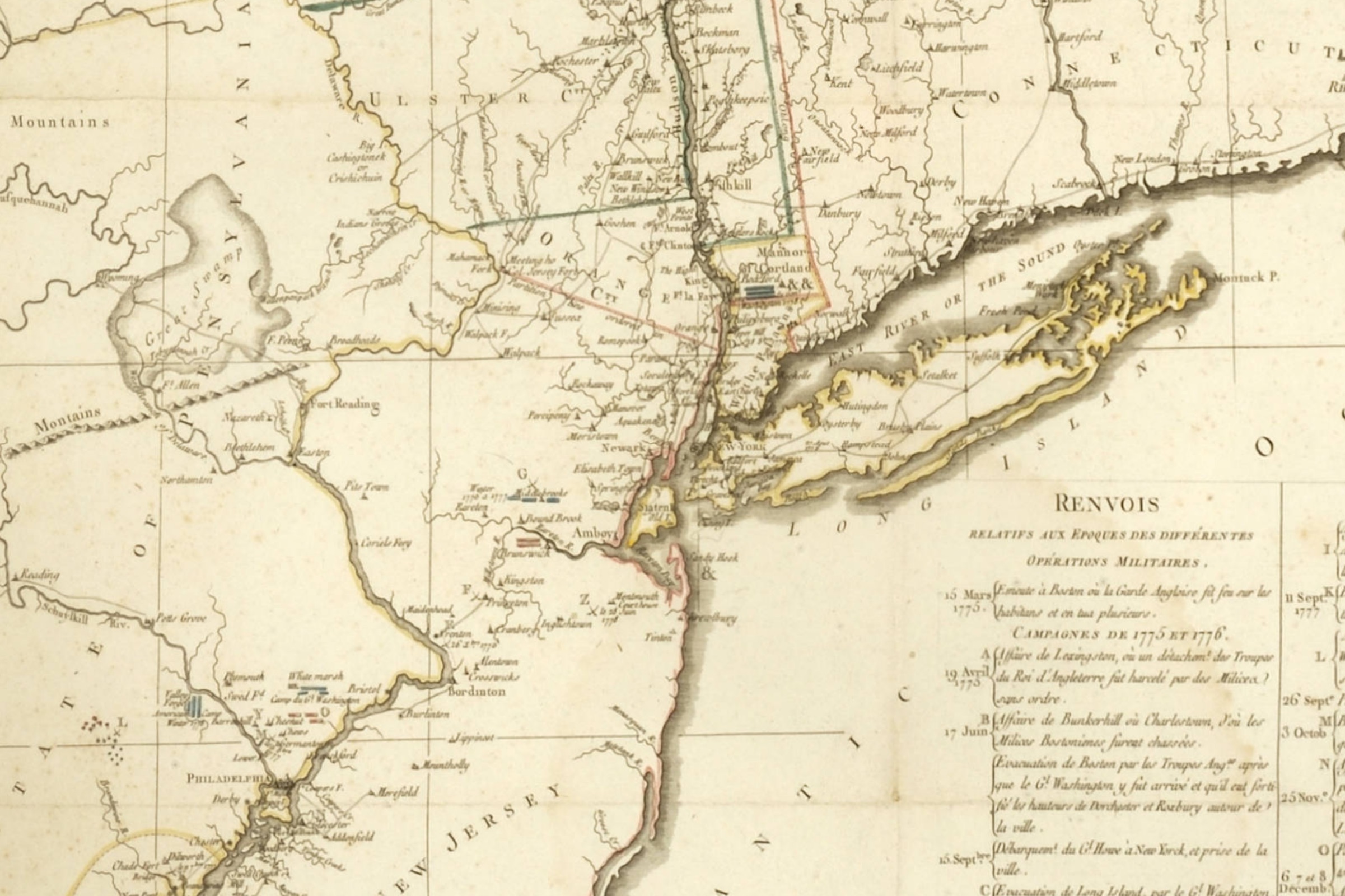 Sebastian Bauman, Plan of the Investment of York and Gloucester

In the fall of 1781, the combined armies of Washington and the comte de Rochambeau laid siege to the British army under Charles, Lord Cornwallis, in Yorktown and forced it to surrender. Sebastian Bauman, a Continental Army engineer, surveyed the siege lines immediately after the victory and produced this map, published in Philadelphia in 1782. The finest printed American map of the Revolutionary War, its greatness lies in fine details. In this portion of the map Bauman depicted the fire from the the allied artillery that compelled the British surrender. 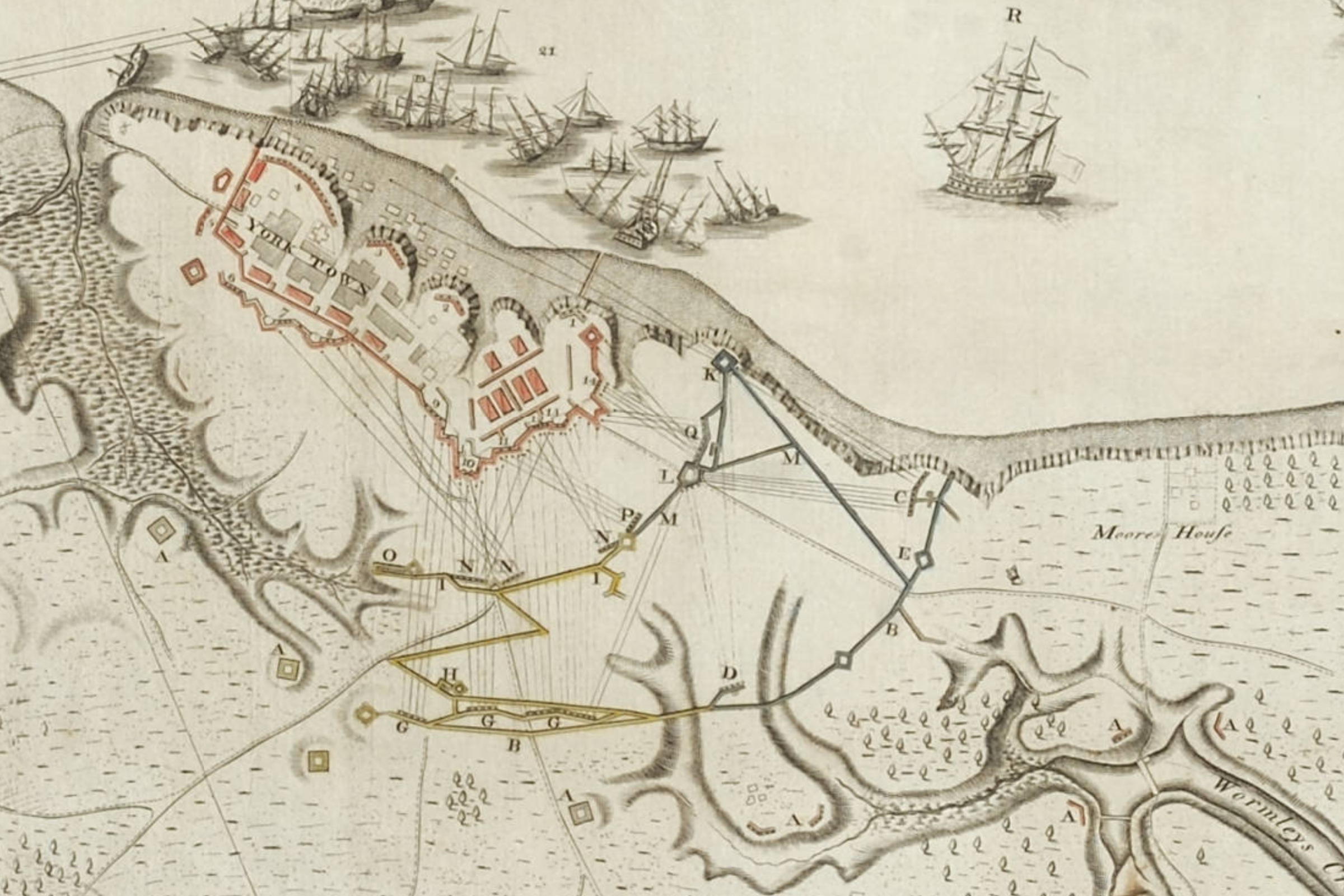 The United States and Great Britain exchanged documents confirming their ratification of the Treaty of Paris in May 1784. The next month Jean Lattré, an official engraver to Louis XVI, published this large-scale map—the first map to delineate the full extent of the new United States of America after the ratification of the treaty. The elaborate cartouche depicts a sailor hanging medallions bearing the Great Seal of the United States, the insignia of the Society of the Cincinnati and the arms of Benjamin Franklin (to whom the map is dedicated) on the highest yard aboard the new ship of state. 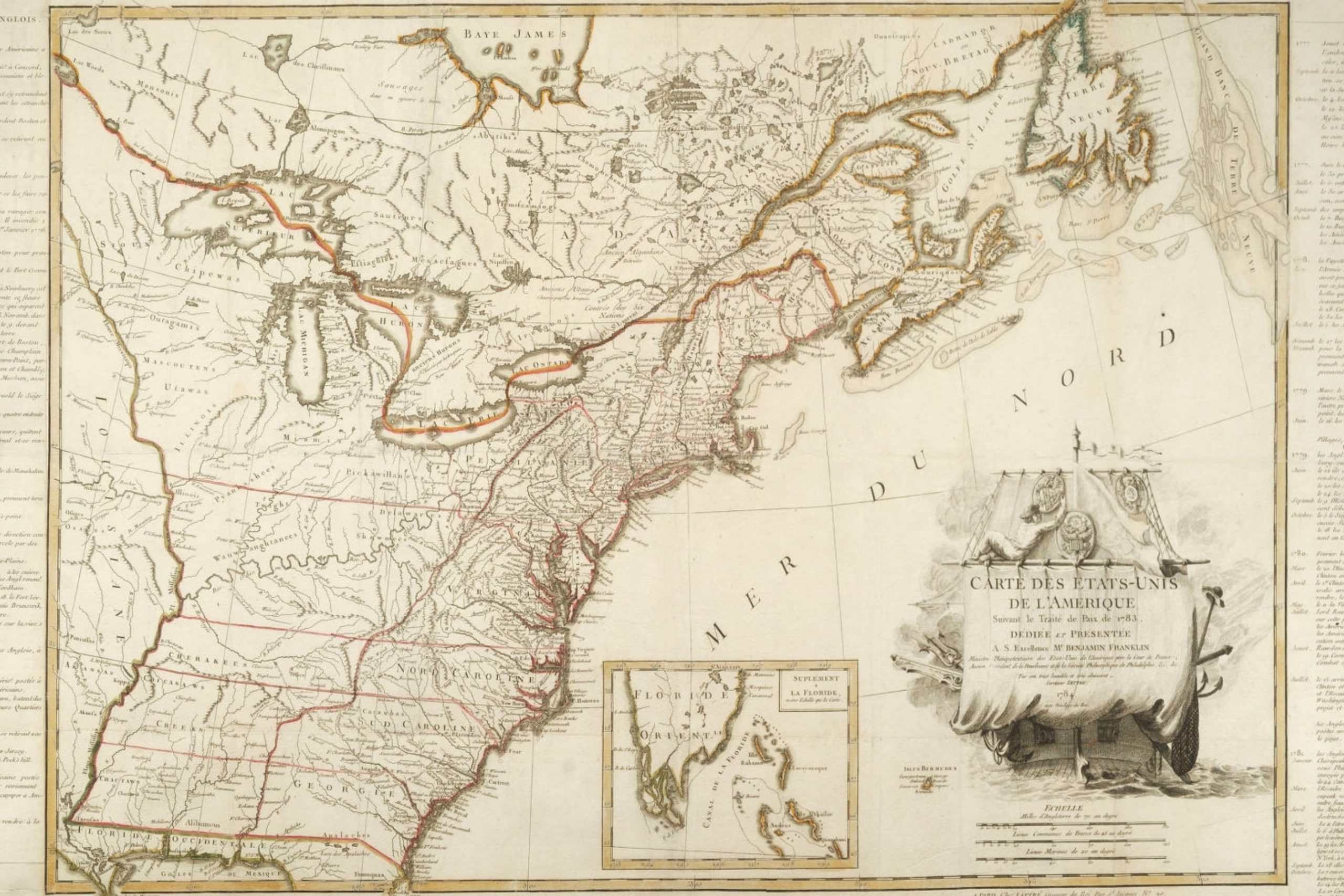 Explore more of the Institute’s Revolutionary War maps in Discover the Collections.