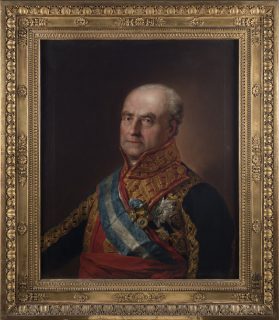 A lost hero of the Siege of Yorktown has been found at last.

The American Revolution Institute of the Society of the Cincinnati in Washington, D.C., is pleased to announce the discovery of a unique portrait of a French general—Claude-Anne de Rouvroy, marquis de Saint-Simon-Montbléru—who was instrumental in winning the final great battle of the Revolutionary War. The Institute just acquired the painting from a family in Spain. It will go on display on Tuesday, January 30 at the headquarters of the American Revolution Institute in Washington, D.C.—the first time the painting has been on view in the United States in its two-hundred-year history.

In the fall of 1781, Saint-Simon commanded some 3,500 French soldiers. Arriving from the West Indies, they landed at Jamestown, Virginia, and joined the much smaller American army under Lafayette near Williamsburg. Together they kept Cornwallis pinned at Yorktown. Washington and Rochambeau arrived with the main French-American army from the north a few weeks later. Saint-Simon commanded the left wing of the allied army at the Siege of Yorktown, barring the roads toward Williamsburg and preventing the British army under Lord Cornwallis from escaping by land.

Saint-Simon was wounded but refused to leave the lines until the British army surrendered. Though shot in the leg, he mounted his horse to take part in the surrender ceremonies. Shortly thereafter, he sailed back to the West Indies with the French navy, and never returned to the United States.

Americans quickly forgot about him. Other French leaders—Lafayette and Rochambeau, mainly—are remembered today. Mention Saint-Simon and even people who know a good deal about the American Revolution are likely to ask “who?”

“One of the main reasons Americans forgot him is that we didn’t know what he looked like,” says Jack Warren, director of the American Revolution Institute. “There wasn’t a single portrait on public display in the United States—or in Europe either.”

That’s changed. The portrait now on display at the Institute was painted between 1815 and 1818 by Vicente Lopez, the greatest Spanish portrait painter of the early nineteenth century. The painting has been in private hands for two hundred years. It was briefly displayed at the Prado in 1902 but hasn’t been seen in public since. It has been the property of a Spanish family for several decades, but even they forgot who the sitter was. It took a good deal of research to confirm his identity.

Why Spain, if he was a French general?

An aristocrat, Saint-Simon escaped France during the French Revolution and led a small army loyal to the king in a war against the French revolutionary government in the Pyrenees. He was made a general of the Spanish army and led Spanish troops against Napoleon. Captured by the French, he was sentenced to death for treason. Napoleon commuted his sentence to life imprisonment, from which he was released when Napoleon fell from power. He lived in Spain for the rest of his life.

The portrait tells his story. The old hero wears the elaborate uniform of a Spanish general, with the blue-and-white sash and star of the Order of Charles III, the highest Spanish military honor of the time. He also wears a gold-and-silver medal suspended from a yellow ribbon, presented by King Ferdinand VII to soldiers who suffered imprisonment at the hands of the French. And above them all is the Eagle insignia of the Society of the Cincinnati, the private patriotic organization founded by George Washington and his officers to perpetuate the memory of the American Revolution. Saint-Simon was an original member. Some thirty-seven years after the Siege of Yorktown, he remembered it as one of the proudest moments of his life.

At the Society’s American Revolution Institute, the portrait has at last come home.

“We started searching for a portrait of Saint-Simon a decade ago,” Jack Warren says, “when we were planning an exhibition on the Siege of Yorktown. We couldn’t find one. An old and not very good engraving in a mid-nineteenth-century book suggested that there was a portrait, but it seemed to be irretrievably lost. So much art was destroyed, damaged or displaced in Spain during their civil war in the 1930s, that we concluded that it may have gone missing then. Its identity was lost, so that when the portrait finally surfaced last year it took some research to be certain Saint-Simon was the subject.”

“This is the perfect home for this portrait,” says Warren. “The purpose of the American Revolution Institute of the Society of the Cincinnati is to ensure that Americans understand and appreciate the achievements of the American Revolution—the event that gave us our independence, our republic, our national identity and the ideals of liberty, equality, natural and civil rights and civic participation that shape our country and the world. The Revolution was the great transforming event of modern history. Men like Saint-Simon who participated in it knew that they had been a part of something extraordinary. It’s our job to share their stories.”