Visual images, from post-Revolutionary paintings and prints to twentieth century newsreels, have shaped the way Americans understand our nation’s history and ideals. This session examined images that helped define and redefine American national identity over nearly two hundred and fifty years and considered how to use those images in a digital learning environment.

Co-presenters with the American Revolution Institute included the American Antiquarian Society, The Huntington and the National Portrait Gallery. This session was the fourth in a professional development series for K-12 educators series titled “Teaching History While Living History” presented by Cultural Organizations Dedicated to Educators. 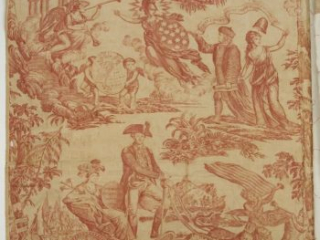 "Washington and American Independance, The Apotheosis of Franklin" bed curtain

"Washington and American Independance, The Apotheosis of Franklin" (alternately known as "The Apotheosis of Franklin and Washington") is a copperplate-printed bed furnishing in red on white cotton or cotton-linen blend, made in England, ca. 1785. The pattern depicts George Washington in military uniform standing in a chariot alongside a seated female figure of America, who holds a caduceus in one hand and an oval plaque inscribed "AMERICAN / INDEPEND/ ANCE / 1776" in the other hand. The chariot is pulled by two leopards, which are flanked by two American Indians, one holding a thirteen-striped flag and the other a flag bearing a rattlesnake inscribed "Unite or Die" and cut into thirteen parts. Soldiers carrying striped flags descend from a mountain and follow the chariot. Behind the chariot is the (labeled) Liberty Tree, bearing an upside-down placard reading "Stamp Act." Above Washington, the pattern depicts Benjamin Franklin next to the personification of Liberty, and the two hold a banner inscribed "WHERE LIBERTY DWELLS THERE IS MY COUNTRY." On the other side of Franklin is the goddess Athena, carrying a shield with thirteen stars and pointing to the Temple of Fame, and two putti holding a globe showing America divided into Georgia, South Carolina, North Carolina, Virginia, Maryland, Pennsylvania, New Jersey, New York, and New England. The winged figure Fame holds two trumpets and flies in front of the temple. Above Franklin are a beaver and a heron with a fish in its mouth shown in a marsh. The textile may have originally been a bed curtain or bedspread, and may have been converted into a drape or hanging at a later date.

The expenses of the American war drove the French government to insolvency, hastening the outbreak of revolution in 1789. This print reflects the radical transformation of the French Revolution that began in the summer of 1792. Allegorical figures of Liberty, Equality and Fraternity—the optimistic motto of the French Revolution’s first years—are joined by Unity and Indivisibility, the added watchwords of the radical Jacobins who imposed political orthodoxy, and violence, through the Terror. The print includes George Washington, Benjamin Franklin and other classical and Enlightenment “founders of liberty,” alongside nine French leaders of the Revolution who had died in battle, or by assassination or execution, as “martyrs of liberty.”
download pdf version of presentation
The American Revolution Institute