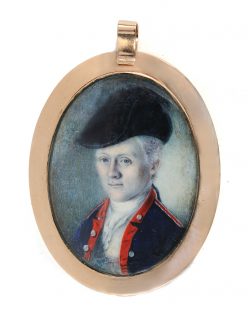 Among the gems of the Institute’s museum collections are five portrait miniatures painted by Charles Willson Peale, the most important American artist during the Revolutionary War. Peale’s war-time portrait miniatures are elegant works of art as well as quickly painted, life-like representations of the soldiers who fought for American independence. They were treasured keepsakes, by both the soldier’s eighteenth-century family and their descendants over the following centuries. But despite being encased behind glass, portrait miniatures were often damaged by dust, water and insects that found their way inside. Two of the Peale portrait miniatures in our collections that displayed such damage were conserved over the winter of 2019-2020 by Carol Aiken, the leading American portrait miniature conservator. The portraits of First Lieutenant William Truman Stoddert of Maryland and Colonel George Baylor of Virginia, both painted in 1778, received similar treatments to clean the paint surfaces, address the effects of past water damage and clean the cases and the woven hair visible on the reverse of each portrait. Preserving these rare miniatures—the only likenesses that exist of these officers—helps to ensure that the faces and lives of two of America’s revolutionaries survive for future generations.

Portrait miniatures were intimate keepsakes given by the sitter to a loved one to convey their affection and to represent their bond. Miniatures were often commissioned to mark important milestones in life, including marriage, long absences and death. The art form, which reached America from England by the 1750s, was at the height of popularity in the late eighteenth and early nineteenth centuries. During the American Revolution, soldiers sat for these small portraits—often no more than two inches high—before leaving home or while serving in the military. They usually presented the miniature to their wife, mother or other close female relative, who wore the portrait as a pendant or bracelet.

Revolutionary War miniatures have an extraordinary life-like quality. Artists painted them in the field, in a short amount of time, with fine detail and a muted color palette that created a sense of realism and immediacy. Most of these portrait miniatures depict officers in their military uniform, providing highly accurate records of the appearance of George Washington’s army. Painted in watercolor on a thin, oval piece of ivory, miniatures were enclosed behind glass in a metal locket-style case. The back of the case often revealed woven hair or initials of the sitter, or of both the sitter and the recipient—further enhancing the miniature’s intimacy.

Charles Willson Peale (1741-1827) painted more than 130 miniatures during the Revolution, including likenesses of George Washington, Henry Knox and Nathanael Greene. “I have done more in miniature than in any other manner,” Peale reflected near the end of the war, “because these are more portable and therefore could be kept out of the way of a plundering enemy.” To execute the miniatures away from his studio, Peale traveled with his “Miniature apparatus,” including a supply of ivories, convex glass pieces and metal cases—all usually imported from England. At the same time, Peale participated in the Revolution as an officer in the Philadelphia militia. During 1778, the year in which he painted the miniatures of Stoddert and Baylor, Peale spent much of the first six months in camp at Valley Forge, observing, socializing with and painting portrait miniatures of soldiers of the Revolution.

Peale, who was born on Kent Island outside Annapolis, frequently sought out Maryland Continental troops in the field—which may be how he met William Truman Stoddert (1759-1793), whose portrait Peale painted about 1778. Born into a wealthy and well-connected family in Charles County, Maryland, William Truman Stoddert became an orphan at the age of nine and was raised by his maternal grandfather, Bayne Smallwood. Stoddert attended the College of Philadelphia (now the University of Pennsylvania) but left in 1776 to join the Continental Army. That December he received a commission as an ensign in the Fifth Maryland Regiment, which would fight in the battles of Brandywine, Germantown, Monmouth, Camden and Guilford Courthouse. He served as brigade major to his uncle, General William Smallwood, for two years beginning in mid-1777. During that time, Quaker diarist Sally Wister of Philadelphia described Stoddert as bashful and intelligent: “he cannot be extoll’d for the graces of person, but for those of the mind he may justly be celebrated; he is large in his person, manly, and an engaging countenance and address.”

Stoddert commissioned Charles Willson Peale to paint his portrait miniature about 1778, wearing the uniform of an infantry officer in the Maryland Continental Line, including a blue coat with red facings and silver buttons, two silver-trimmed red shoulder straps, a white waistcoat, a red cape and a rounded black hat with a black feather. The gilt copper case is atypical of the style Peale used for his miniatures, with an unusually broad front bezel, and is probably not original. The back of the case reveals a plat of woven hair and the initials “WTS” in sheet gold. During the recent conservation treatment, Ms. Aiken discovered extensive water damage in the background and around the edges of the painting that a previous conservator had retouched—discernible because the damaged paint is slightly lower than the original paint level due to the losses underneath the repainting—but left the paint surface as found because of its fragility. She cleaned the hair and monogram, as well as the back cover glass.

William Truman Stoddert probably commissioned this miniature to present to his wife, Sarah. He returned home in 1783 after serving with the Maryland Line in the South. His highest rank in the Continental Army was first lieutenant—that he has often been referred to as Major Stoddert must refer to a subsequent rank in the Maryland state military or local militia. His son attributed his death in 1793 to “disease caused by the hardships of camp life” during the Revolution. William Truman Stoddert’s portrait miniature descended in the family, from his son, John Truman Stoddert, down to Williams Swift Martin III, who donated it to our museum collections in 1984. 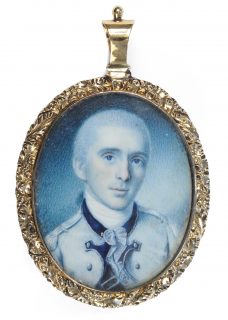 Colonel George Baylor of the Third Continental Light Dragoons commissioned Charles Willson Peale to paint his portrait miniature at Valley Forge in the spring of 1778.

A hallmark of Charles Willson Peale’s miniatures is a bluish tone in the faces and other light-colored areas, the result of the loss over time of a fugitive red pigment. This effect is particularly apparent in the portrait miniature of George Baylor (1752-1784), which Peale painted at Valley Forge in the spring of 1778. Baylor, a native of Caroline County, Virginia, had joined the Continental Army in August 1775, when he secured a commission as a lieutenant colonel and a coveted assignment as an aide-de-camp to George Washington. Baylor served with the general at Princeton and Trenton, after which Washington dispatched him to carry news of the victory at Trenton to Congress. In January 1777, Baylor was promoted to colonel and given command of the newly formed Third Continental Light Dragoons, a mounted unit charged with reconnaissance, intelligence gathering and escorting important individuals, including Martha Washington.

Baylor was twenty-six years old in the spring of 1778 when he paid Charles Willson Peale one hundred dollars to paint his miniature. Baylor sat for the portrait wearing his Continental Light Dragoons uniform, consisting of a white coat with blue facings and silver epaulets, with a white stock at his neck. Peale set the miniature in a gold case with a plat of woven hair visible through a small window on the back. Originally worn as a pendant or possibly on a bracelet, the case was later modified with a pin to serve as a brooch and a stand for display. The recent conservation process revealed lifting and lost paint due to water damage around the perimeter of the portrait, debris scattered across the paint surface, dirt and discoloration on the gold case, and a small lock of blonde hair concealed from view on the back. Ms. Aiken disassembled the case, dusted the paint surface, consolidated lifting paint and toned areas of loss, cleaned the case, secured the lock of hair so it is visible through the back glass, and reassembled the miniature.

Just a few months after Peale painted this portrait, a British soldier bayoneted Baylor in the chest during a surprise attack in northern New Jersey that left more than two-thirds of Baylor’s men killed, wounded or captured. Baylor was among those taken prisoner, first held by the British in New York City, then paroled to his home in Virginia. Exchanged by late October 1781, Baylor attempted to resume his command and briefly joined General Nathanael Greene’s army in the South the following summer. Although Baylor’s poor health forced him to return home after only a few months, he retained his commission and was promoted at the end of the war to brevet brigadier general. He never fully recovered from his wounds and died in November 1784. The portrait miniature descended in the family, from the colonel’s son John Walker Baylor down to Colonel Baylor’s great-great-great-nephew William R. Robin, Jr., who donated it to our museum collections in 1967. 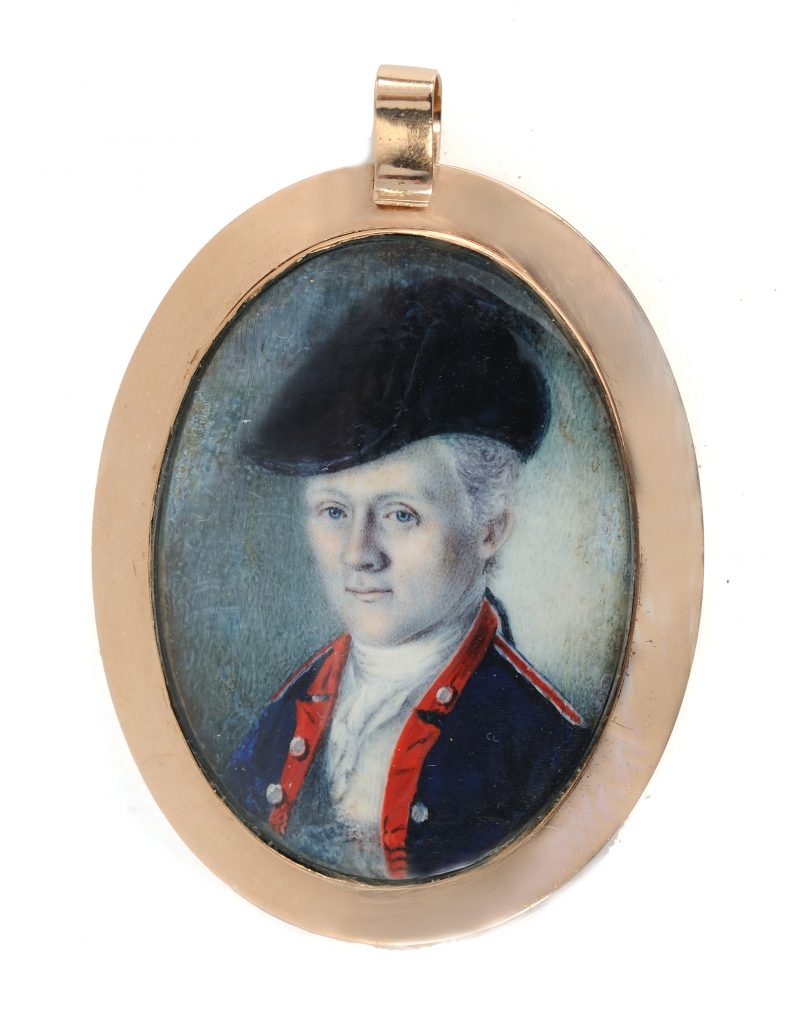 Completed in February 2020, conservation on the portrait miniature of William Truman Stoddert resulted in a brighter, more crisp appearance of the painting and case. 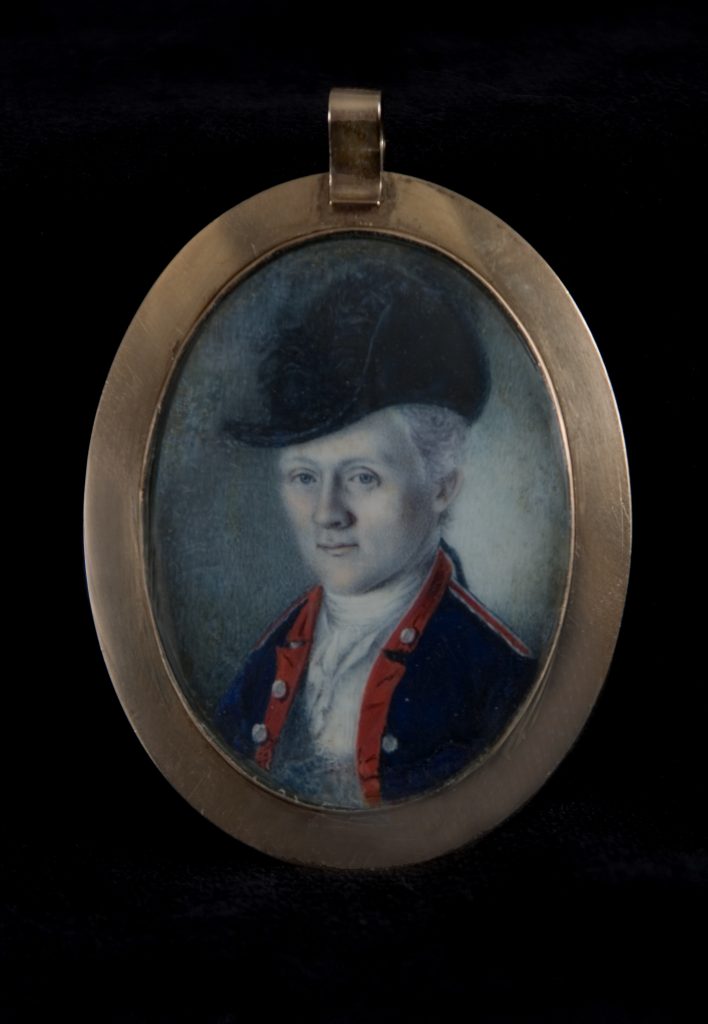 Previous water damage affected the paint surface of the miniature, and the case had accumulated dirt. 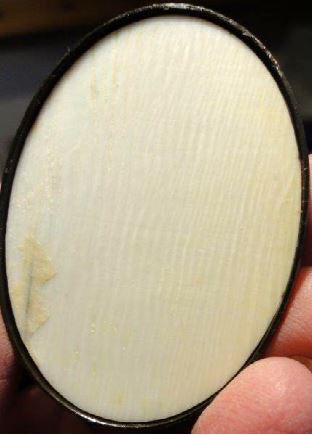 Charles Willson Peale painted his miniature of William Truman Stoddert on an unusually thick piece of heavily grained ivory. The pronounced vertical grain is visible on the back, as is an old patch of a crack at lower left. 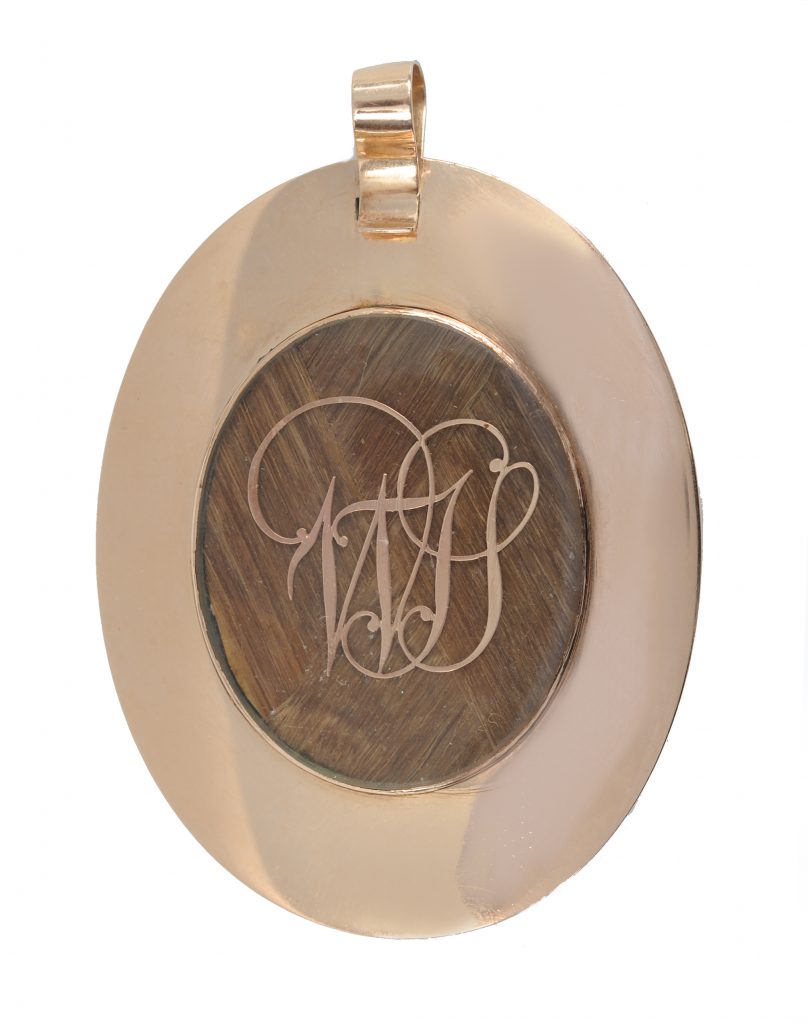 Back of William Truman Stoddert miniature after conservation

The woven hair, gold monogram and cover glass on the back of the case gleam after cleaning. 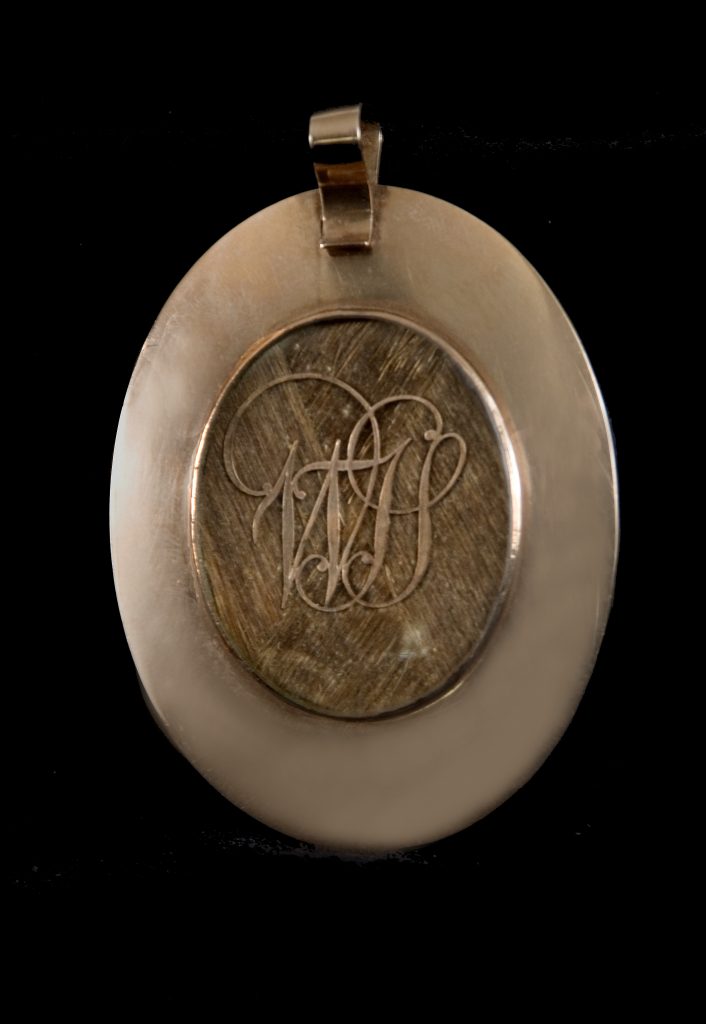 Back of William Truman Stoddert miniature before conservation

After more than two hundred years, dirt and other debris accumulated inside the back of the case. 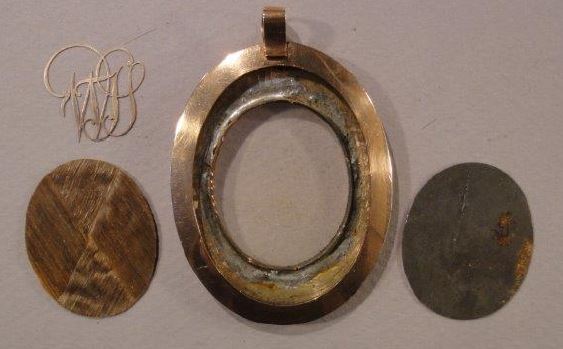 An oval piece of metal (right) sealed the contents of the back of the case—the oval plat of woven hair and the script initials in sheet gold (left)—from the portrait. 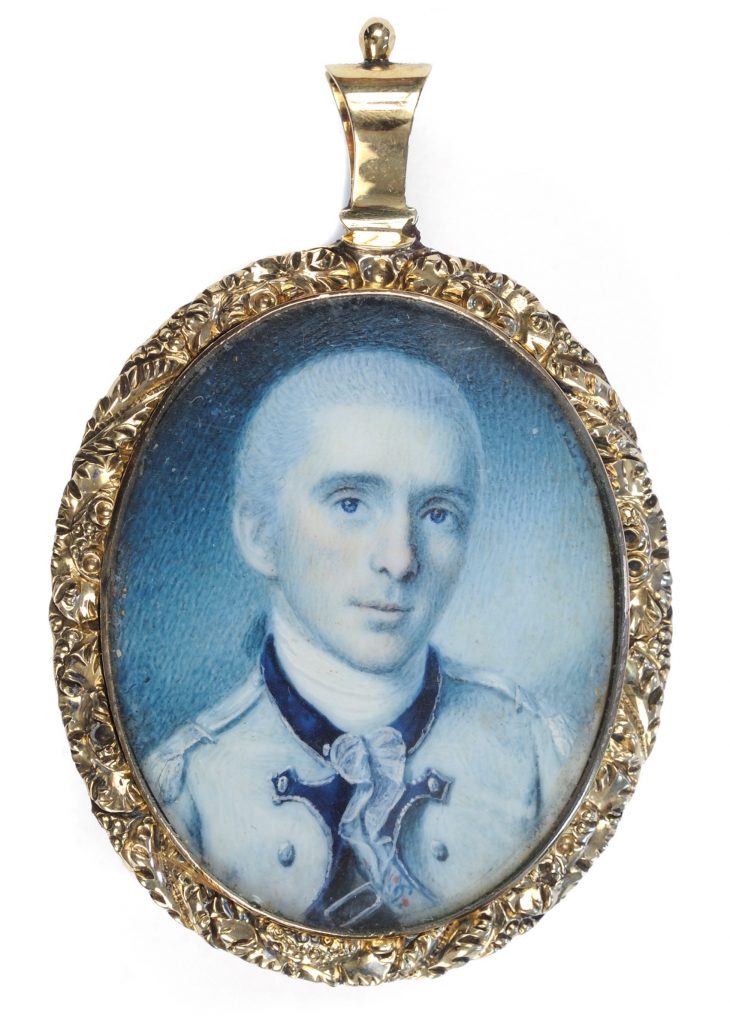 Even after conservation was completed in February 2020, the paint surface had a bluish tone resulting from the loss over time of a fugitive red pigment, often seen in the flesh tones and other light areas in many Charles Willson Peale miniatures. 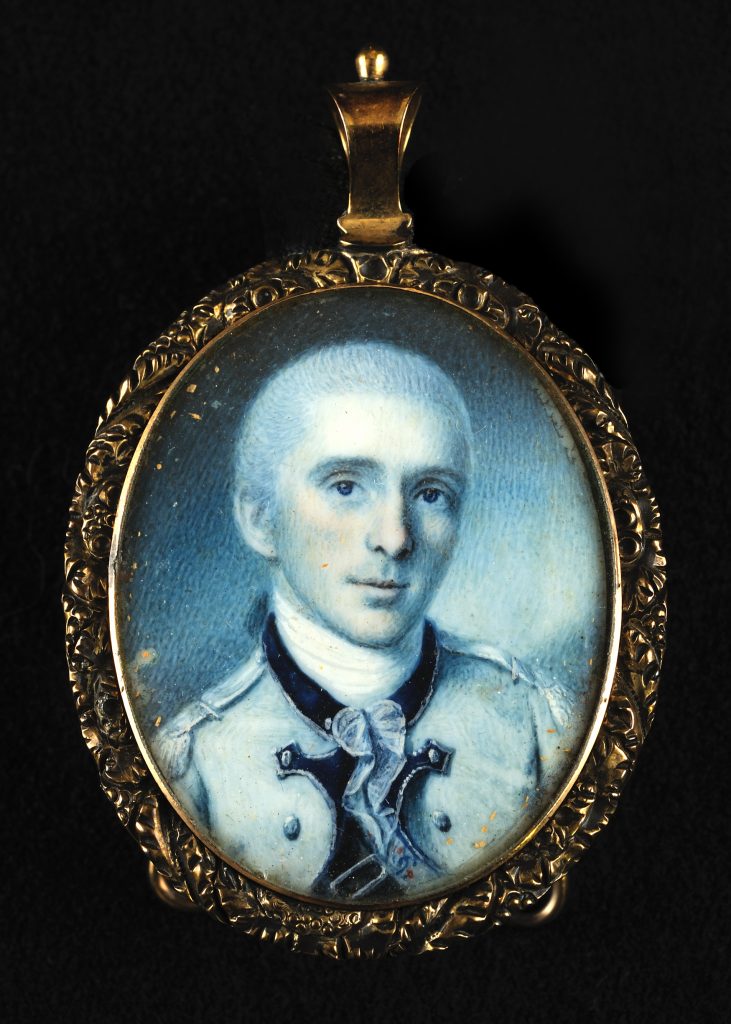 The miniature exhibited paint loss from past water damage, debris on the painting surface, and a discolored gold case. 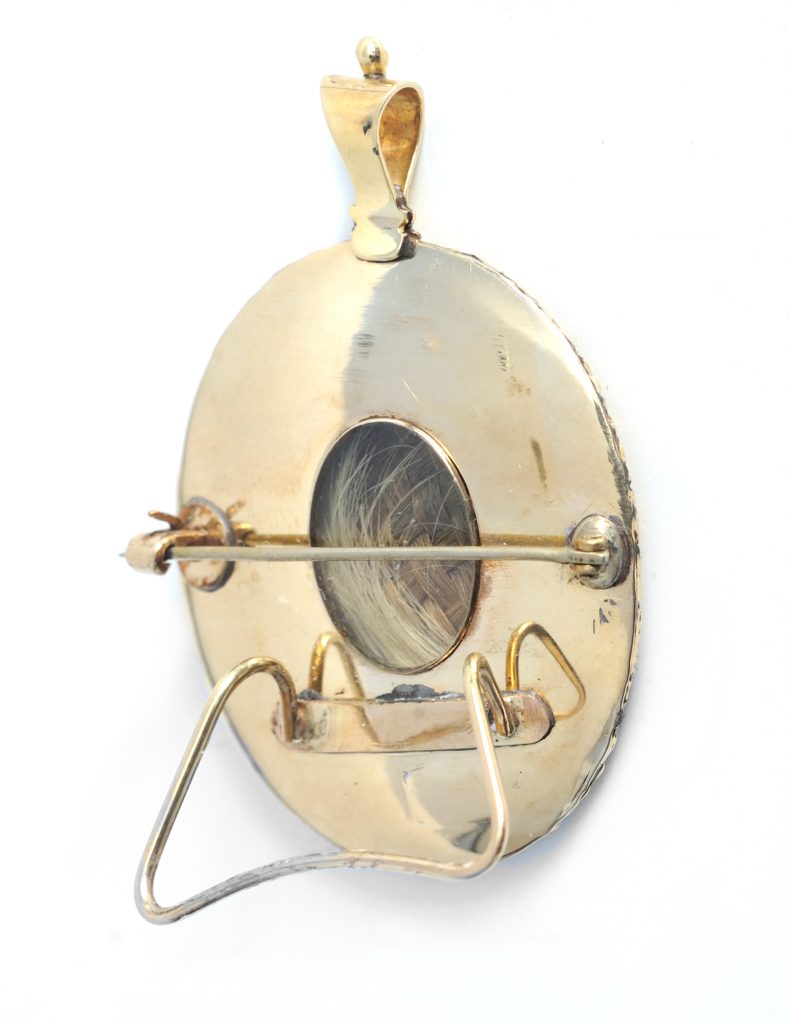 Back of George Baylor miniature after conservation

The conservation process revealed a lock of blonde hair loose in the back of the case, which the conservator returned to what was probably its original placement within the glass window. 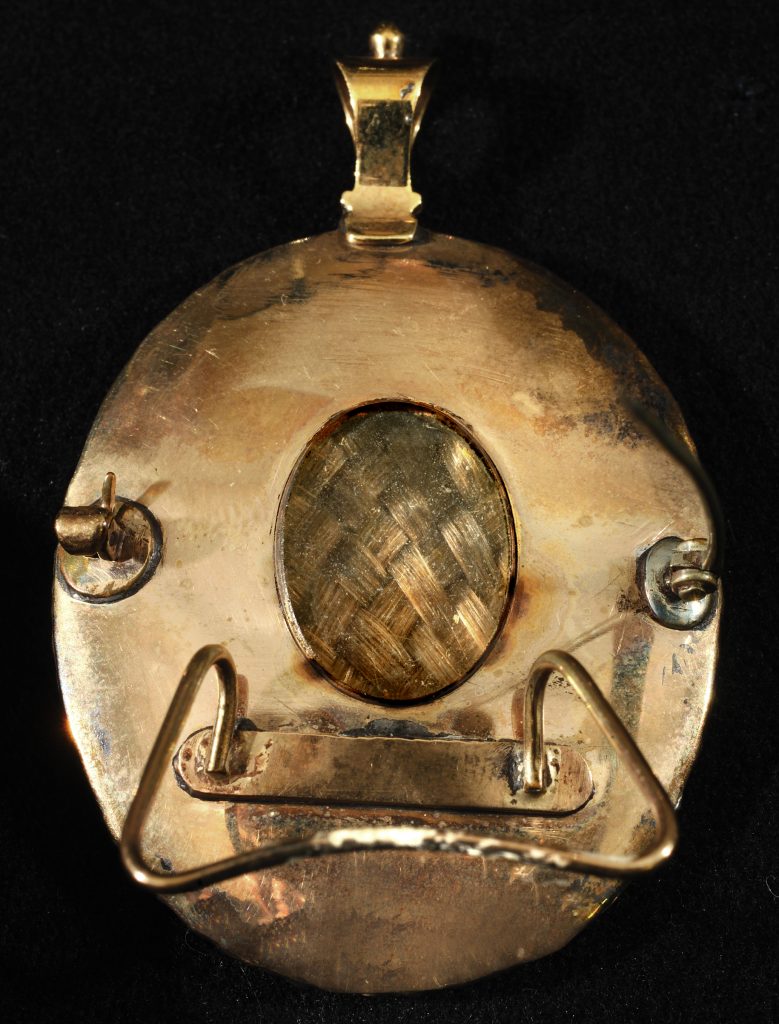 Back of George Baylor miniature before conservation

In the nineteenth and twentieth centuries, subsequent owners of the miniature added a pin and clasp, as well as a stand, to the back of the case. 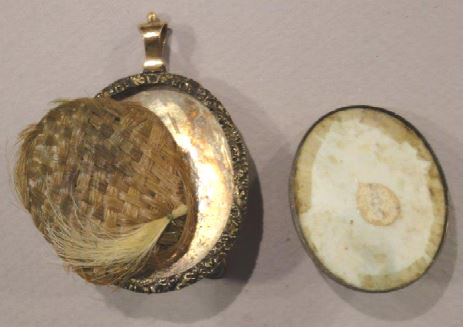 Once the case was disassembled, the back of the ivory support (right) exhibited glossy adhesive residues and remnants of a goldbeater's skin—an animal intestine originally used to secure the ivory within the case—around the perimeter.