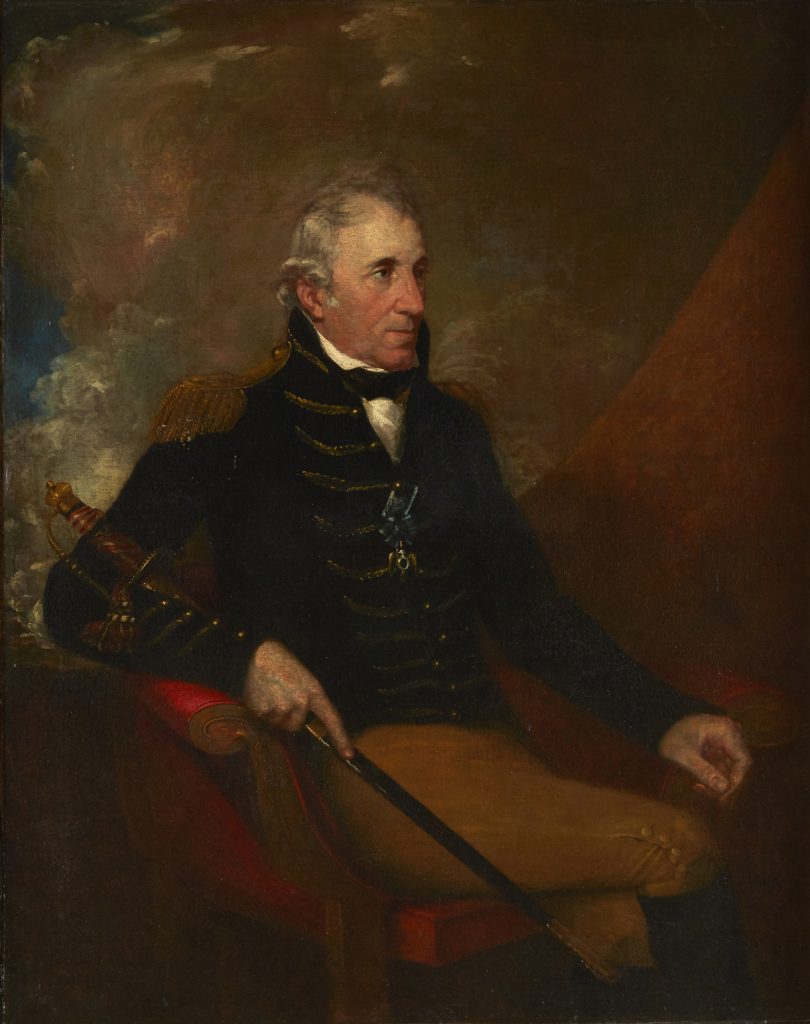 Samuel F. B. Morse’s oil portrait of Maj. Gen. Thomas Pinckney immediately became one of the treasures of the collections—and one of the highest conservation priorities—when the Institute acquired it in November 2019. The purchase of the portrait was made possible by dedicated gifts from 195 generous donors—which have also provided a portion of the conservation costs. Thomas Pinckney was one of South Carolina’s important early leaders and an energetic defender of American liberty. Morse’s portrait, painted in 1818, depicts him with symbols of his long life in public and patriotic service. Two hundred years later, the painting’s strong likeness and enticing details remain, although somewhat obscured by the effects of the passage of time and the rigors of display.

A native of Charleston, Thomas Pinckney (1750-1828) served in the Continental Army for almost the entire Revolutionary War, fighting with distinction in the southern campaign. At the Battle of Camden in August 1780, Major Pinckney, newly appointed as an aide-de-camp to Maj. Gen. Horatio Gates, was severely injured and taken prisoner. After Pinckney was exchanged, he returned to Charleston, which the British evacuated in December 1782. Following the war, he served as governor of South Carolina, minister to Great Britain, envoy extraordinary to Spain, member of the U.S. House of Representatives and major general in the U.S. Army during the War of 1812. He was an original member of the Society of the Cincinnati, succeeding his brother Charles Cotesworth Pinckney as its fourth president general (1825-1828).

Artist-inventor Samuel F. B. Morse (1791-1872) painted this three-quarter-length portrait of Thomas Pinckney in 1818, during Morse’s first winter season in Charleston. The Massachusetts-born artist spent winters between 1818 and 1821 in Charleston, seeking a less-crowded market for portrait commissions than he found in Gilbert Stuart’s Boston. For three hundred dollars, Thomas’ brother, Charles Cotesworth Pinckney, commissioned the portrait, joking that Morse should paint Thomas “twenty years younger than he really was.” The resulting canvas—which Morse began in Charleston and finished in his studio in Massachusetts—pictured Thomas Pinckney in his War of 1812 uniform, holding a sword and wearing the insignia of the Society of the Cincinnati. (This is the only portrait of Thomas Pinckney painted from life to include the Society Eagle.) The rich colors, dramatic background and air of casual elegance in the portrait are typical of Morse’s Charleston style.

Since the portrait was first exhibited publicly in Charleston in 1822, it has been displayed by at least four institutions in the U.S. Now two hundred years old, the painting exhibits multiple layers of accumulated dirt and grime, discolored varnishes, abrasion, canvas tears, cracked and flaking paint, and losses to the original paint and old attempts to repaint them—conditions that are not uncommon in paintings of this age. Previous attempts to repaint areas of loss may have unintentionally altered the original composition, which conservators suspect has occurred in parts of the sitter’s face, collar and coat, as well as the chair. In the mid-twentieth century, the fragile canvas was removed from a traditional wood stretcher and adhered to a solid Masonite panel—an acidic backing that is not a proper long-term support for the painting.

A comprehensive conservation treatment will address these issues and more, stabilizing the painting for safe display and travel and returning its appearance, as much as possible, to the artist’s original intent. Much of this effort will be focused on cleaning the painting, removing the many layers of dirt, varnishes and repaints that accumulated on the paint surface since its creation. Conservators will then remove the canvas from the Masonite panel and perform structural repairs before mounting the original canvas on a new, more appropriate secondary support. Lastly, with an objective and detailed approach, they will inpaint areas of loss following the evidence of the artist’s original composition—taking care to isolate their additions from Morse’s original work with a layer of reversible varnish. 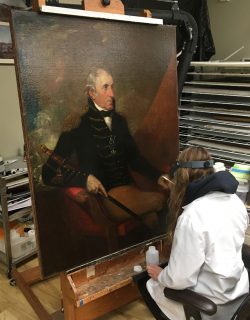 The Institute has chosen Olin Conservation, Inc., of Great Falls, Virginia, to undertake this important and complex project. Founded in 1969, Olin Conservation, Inc., specializes in museum-quality treatment of paintings and murals. Among its most prominent conservation projects have been the Gettysburg Cyclorama at Gettysburg National Military Park, the Brumidi murals at the U.S. Capitol and the portrait collection of New York City Hall. The firm also conserved Samuel F. B. Morse’s 1819 portrait of President James Monroe at the Charleston City Hall, giving its conservators invaluable knowledge of the artist’s style, technique and materials. The Institute previously turned to Olin Conservation, Inc., to conserve H. Siddons Mowbray’s wall and ceiling murals in the Key Room of its headquarters, Anderson House.

The first stage of conservation of Morse’s portrait of Thomas Pinckney began in mid-March 2020, with testing and analysis revealing the history of the painting in microscopic layers. Conservators are using ultraviolet light, microscopic analysis and other tools to examine and identify the artist’s original paint and varnish layers, as well as the last two hundred years of damage, repaint and restoration efforts. They will be able to answer questions such as when the different layers of repaint and varnish were added, what alterations have been made during previous restorations, what kinds of paint and varnish products previous conservators used on the painting, and what type of adhesive was used to attach the canvas to the Masonite panel. This first stage allows the conservators to determine the techniques and materials they will use in each stage of their work and to develop a comprehensive plan for restoring the original appearance of the painting.

Return for more updates as the project progresses!

Thank You to Our Donors

Some 190 donors and nine constituent societies generously donated all of the funds needed to pay for the acquisition and conservation of the Thomas Pinckney portrait. We are grateful for the collective generosity of this special donor group for their historic support.

Read the Roll of Supporters
The American Revolution Institute