In 1792, Samuel Jennings, a native of Philadelphia living in England, painted an allegory symbolizing the abolition of slavery for the reading room of the Library Company of Philadelphia, the oldest private library in the United States and a center of antislavery thought and action. This lesson challenges students to interpret the rich symbolism in the painting to reveal what the painting meant to the directors of the Library Company who instructed Jennings, and more broadly about how they imagined slavery should be ended. 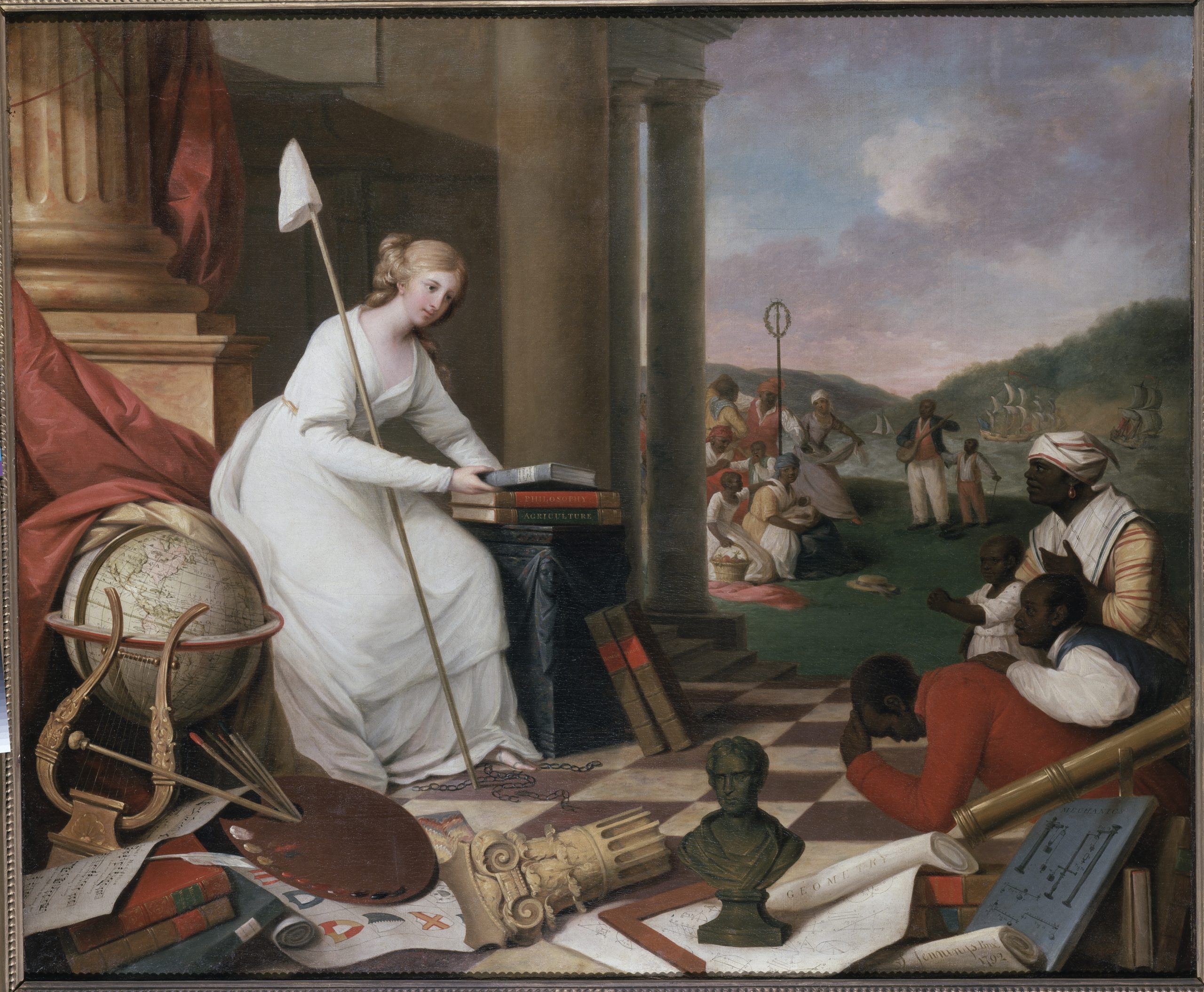 Liberty Presenting the Arts and Sciences (1792) by Samuel Jennings is one of first works of art by an American to express antislavery ideas (Library Company of Philadelphia).

The American Revolutionaries appealed to ideals of liberty, equality, and natural and civil rights to explain the aims of their revolution against British rule.

On January 12, 1790, Samuel Jennings, who was living in London, wrote to his father in Philadelphia to say that he had learned that the Library Company of Philadelphia would soon move to a new building. The Library Company, which had been founded by Benjamin Franklin in 1731 was one of the most important libraries in America. Jennings asked his father to approach the directors of the library with his offer to paint a picture for the new library building. He suggested a painting of Minerva, the Roman goddess of wisdom, who was also a patron of the arts and of trade, but said he would be honored to paint anything the directors wanted.

On April 3, 1790, the directors wrote to Jennings accepting his offer. They described the scene they wanted Jennings to paint:

the figure of Liberty (with her cap and proper Insignia) displaying the arts by some of the most striking symbols of Painting, Architecture, Mechanics, Astronomy, etc., whilst She appears in the attitude of placing on the top of a Pedestal, a pile of Books, lettered with, Agriculture, Commerce, Philosophy, & Catalogue of Philadelphia Library. A Broken Chain at her feet, and in the distant back Ground of a Groupe of Negroes sitting on the Earth, or in some attitude of expressive of Ease & Joy.

The painting Samuel Jennings made for the Library Company of Philadelphia invoked the Revolutionary ideals of liberty and natural rights to advance an abolitionist message.

The directors of the Library Company who wrote to Jennings were in favor of the abolition of slavery. Philadelphia had one of the largest and most vocal group of antislavery advocates in the country. The city had been founded by Quakers, among whom were some of the  first and most active opponents of slavery in the colonies. By the Revolution Philadelphia was the largest and most cosmopolitan city in British America, widely admired for its dedication to rational improvements—clean, well-lit streets, a hospital, a library, access to clean water, fire companies—and its commitment to the interests of ordinary people. The antislavery movement attracted non-Quakers, and together they formed the Society for the Relief of Free Negroes Unlawfully Held in Bondage in 1775. The group was reorganized in 1784 as the Pennsylvania Society for Promoting the Abolition of Slavery and for the Relief of Free Negroes Unlawfully Held in Bondage.

Members of the group agitated for the Pennsylvania Act for the Gradual Abolition of Slavery, which was adopted by the General Assembly in 1780. Despite this victory, the abolitionists still had work to do. They believed Americans had escaped the tyranny of the British monarchy and that Americans must extend the blessings of liberty to people held in slavery. The directors of the Library Company asked Jennings to paint a scene reflecting this ideal. Jennings agreed and completed the painting in London in 1792 and shipped it to Philadelphia, where it was displayed in the Library Company’s building.

Questions to consider as a class:

That from a regard for the happiness of Mankind an Association was formed several years since in this State by a number of her Citizens of various religious denominations for promoting the Abolition of Slavery & for the relief of those unlawfully held in bondage. A just & accurate Conception of the true Principles of liberty, as it spread through the land, produced accessions to their numbers, many friends to their Cause, & a legislative Co-operation with their views, which, by the blessing of Divine Providence, have been successfully directed to the relieving from bondage a large number of their fellow Creatures of the African Race. They have also the Satisfaction to observe, that in consequence of that Spirit of Philanthropy & genuine liberty which is generally diffusing its beneficial Influence, similar Institutions are gradually forming at home & abroad.

That mankind are all formed by the same Almighty being, alike objects of his Care & equally designed for the Enjoyment of Happiness the Christian Religion teaches us to believe & the Political Creed of America fully coincides with the Position. Your Memorialists, particularly engaged in attending to the Distresses arising from Slavery, believe it their indispensable Duty to present this Subject to your notice. They have observed with great Satisfaction that many important & salutary Powers are vested in you for “promoting the Welfare & Securing the blessings of liberty to the “People of the United States.” And as they conceive, that these blessings ought rightfully to be administered, without distinction of Colour, to all descriptions of People, so they indulge themselves in the pleasing expectation, that nothing, which can be done for the relive of the unhappy objects of their care, will be either omitted or delayed.

From a persuasion that equal liberty was originally the Portion, It is still the Birthright of all men, & influenced by the strong ties of Humanity & the Principles of their Institution, your Memorialists conceive themselves bound to use all justifiable endeavours to loosen the bounds of Slavery and promote a general Enjoyment of the blessings of Freedom. Under these Impressions they earnestly entreat your serious attention to the Subject of Slavery, that you will be pleased to countenance the Restoration of liberty to those unhappy Men, who alone, in this land of Freedom, are degraded into perpetual Bondage, and who, amidst the general Joy of surrounding Freemen, are groaning in Servile Subjection, that you will devise means for removing this Inconsistency from the Character of the American People, that you will promote mercy and Justice towards this distressed Race, & that you will Step to the very verge of the Powers vested in you for discouraging every Species of Traffick in the Persons of our fellow men

Franklin
President of the Society

Assessment and Demonstration of Student Learning

Have the students write one or two paragraphs about one of the symbols in the image and why this concept was key to the formation of the ideals of the American Revolution and the early abolitionist movement.

Robert Edge Pine, a British painter who was sympathetic to the American cause, painted a large allegorical canvas in 1778 he titled America, which he described as an allegorical scene in which “America, after having suffered the several evils of war, bewailed its unhappy cause, and lamented over the victims of its fury—her ruined towns—destroy’d commerce, &c. &c. On the appearance of Peace, is represented an extacy of gratitude to the Almighty—Heroic Virtue presents Liberty attended by Concord—Industry, followed by Plenty and her Train, form a group expressive of Population; and Ships denote Commerce.” Suffering America weeps at a cenotaph to four American heroes of the war—James Warren, James Montgomery, David Wooster and James Mercer—who had fallen in battle.

Pine employed Joseph Strutt to engrave a plate of America, which Pine published himself. The print is dedicated “To Those who wish to Sheathe the Desolating Sword of War And to Restore the Blessings of Peace and Amity to a divided People.” Pine emigrated to America in 1784 and supported himself painting portraits, which occupied most his time until his death in 1788. Pine exhibited America in Philadelphia and sold copies of the print. The original painting was destroyed in an accidental fire in 1803 (for more on the print, see Ten Great Revolutionary War Prints).

Members of the Pennsylvania Abolition Society might have had this painting in mind when formulating a request for their own allegorical painting promoting emancipation. The members of the Society may have been familiar with the painting.

Questions to consider as a class:

Open a PDF of this lesson

Consider the related lesson A Plea to End Slavery: The Essay of “Vox Africanorum” in the lesson plan collection Revolution on Paper. 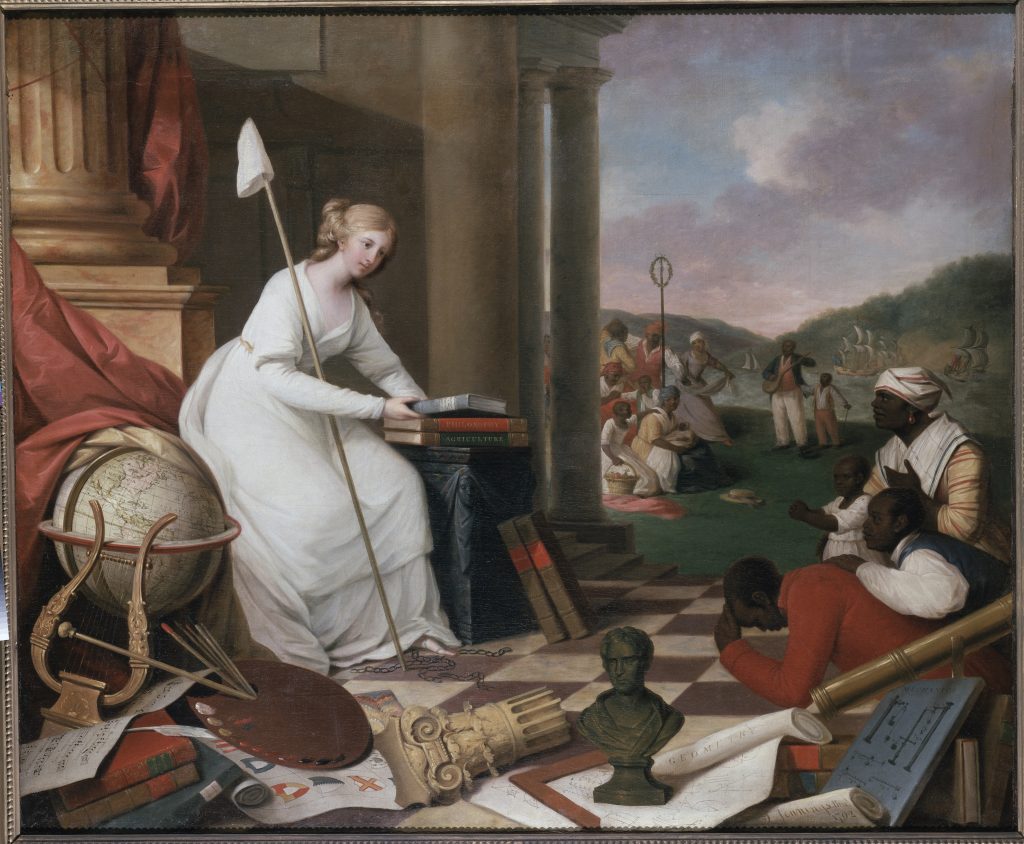 Liberty Displaying the Arts and Sciences, or The Genius of America Encouraging the Emancipation of the Blacks
Samuel Jennings
1792
Library Company of Philadelphia 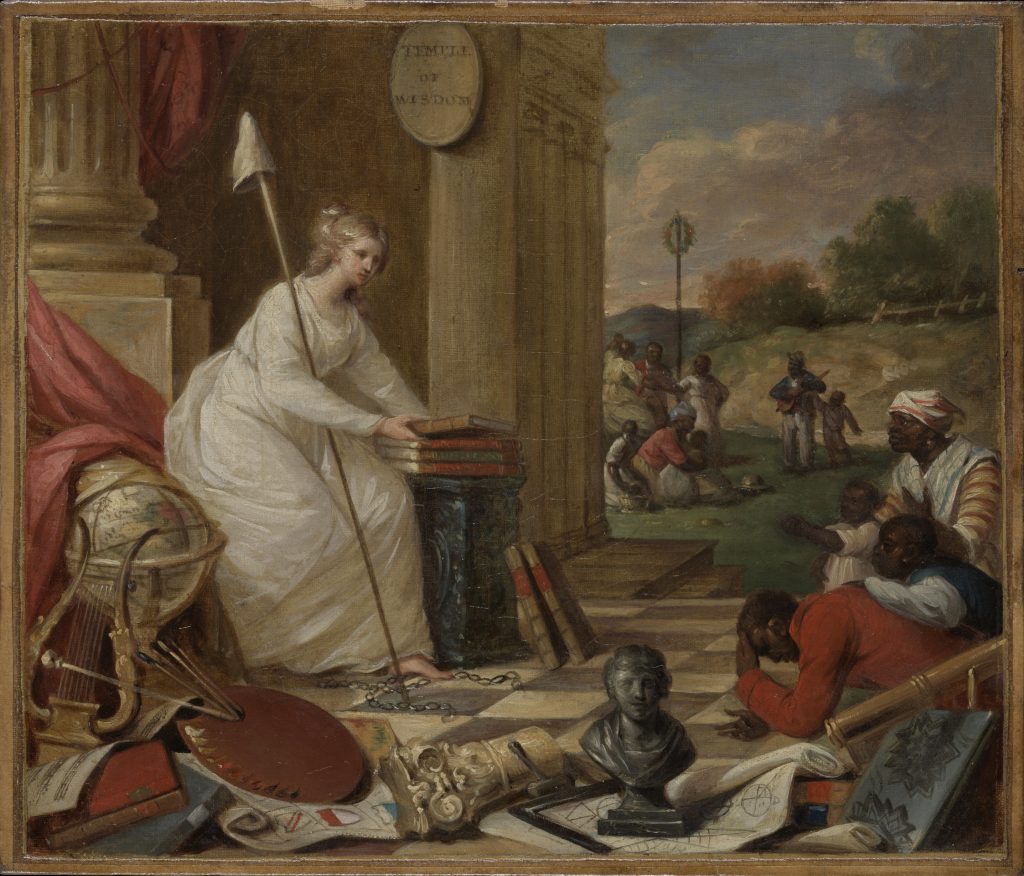 Artists preparing to paint a large work like Liberty Presenting the Arts and Sciences often painted a much smaller oil sketch like this one. Other than the fact that the sketch is not as finely detailed as the final work, what are the differences between the two? Can you find three differences the sketch and the final work? Why do you think the artist altered his plan and made those changes? 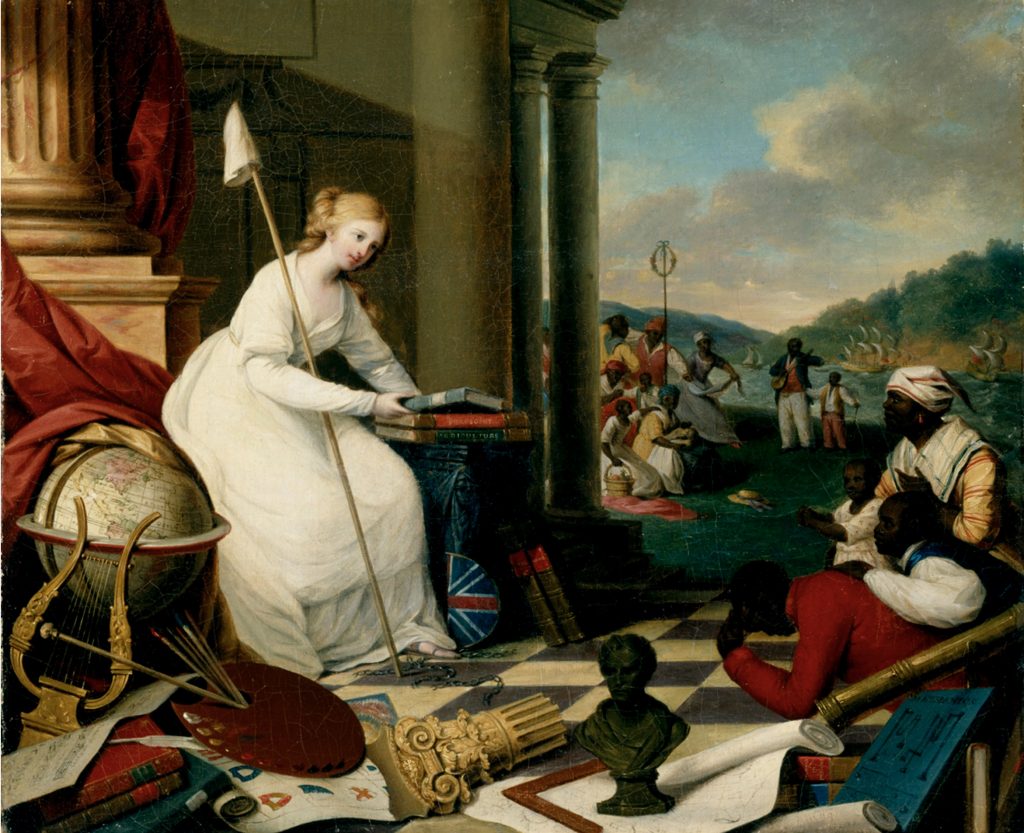 The artist painted this copy to serve as the basis for an engraved print of the painting he hoped to sell. He added one important detail to the painting, which is not found in his oil sketch or the finished painting he sent to the Library Company of Philadelphia. What is that new detail? Can you find it? What does it tell us about who he intended to sell the print to? Why did the artist think they would be interested in buying a print of this painting? 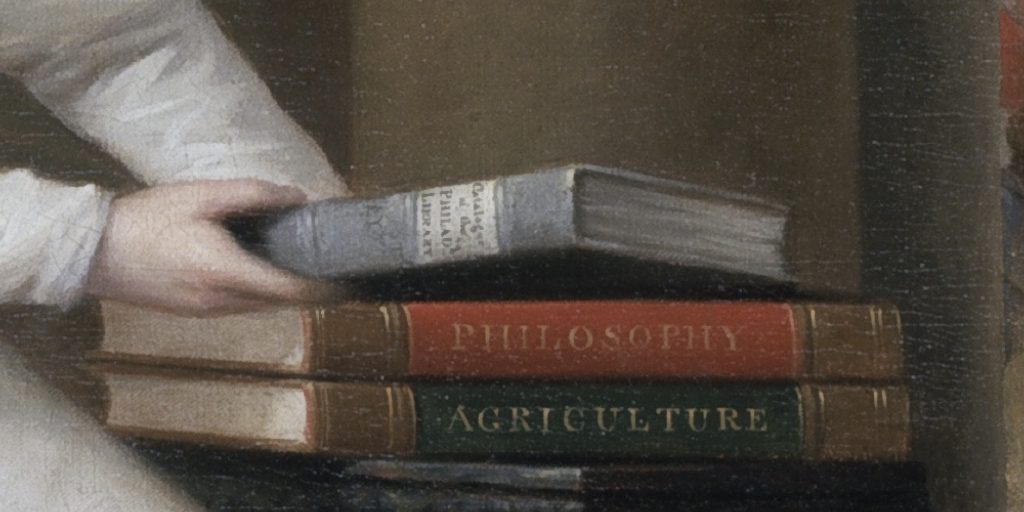 In this detail from Liberty Presenting the Arts and Sciences, Liberty is placing three books, titled Philosophy, Agriculture, and Catalogue of the Philadelphia Library on a column.Why did the artist depict her placing these book there? Are the study of philosophy and agriculture related to the abolition of slavery? If so, how? 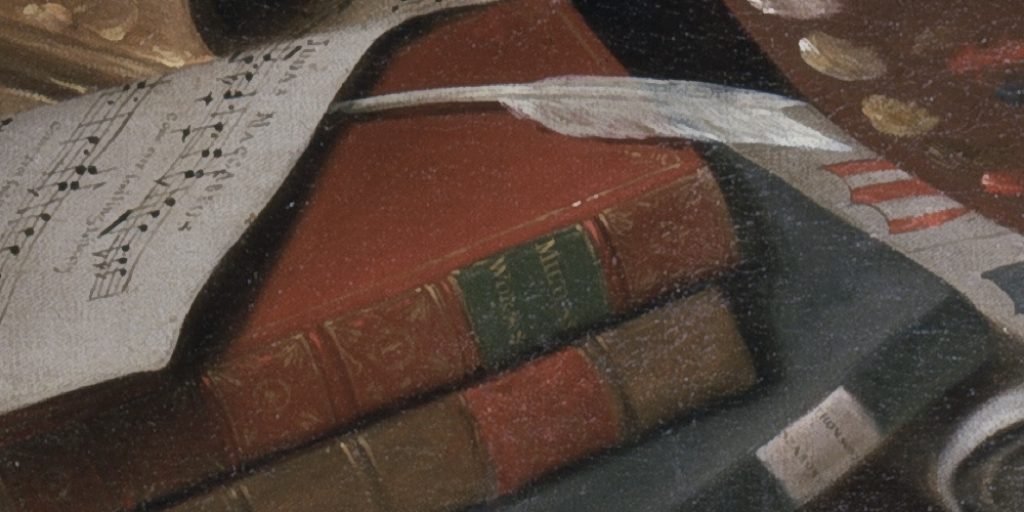 In this detail from Liberty Presenting the Arts and Sciences, the artist has included a page from George Friedrich Handel's oratorio Judas Maccabeus, which follows the Old Testament story of an ancient Hebrew revolt against tyrants intent on enslaving them, a copy of John Milton's works, which include Milton's idea that religious, personal, and civil liberty is essential to civilized life, and at the bottom of the stack, a copy of the Scottish poet James Thomson's Seasons, a work completed in 1730 and known for its condemnation of the slave trade. What message was the artist trying to convey by including these works in the painting? 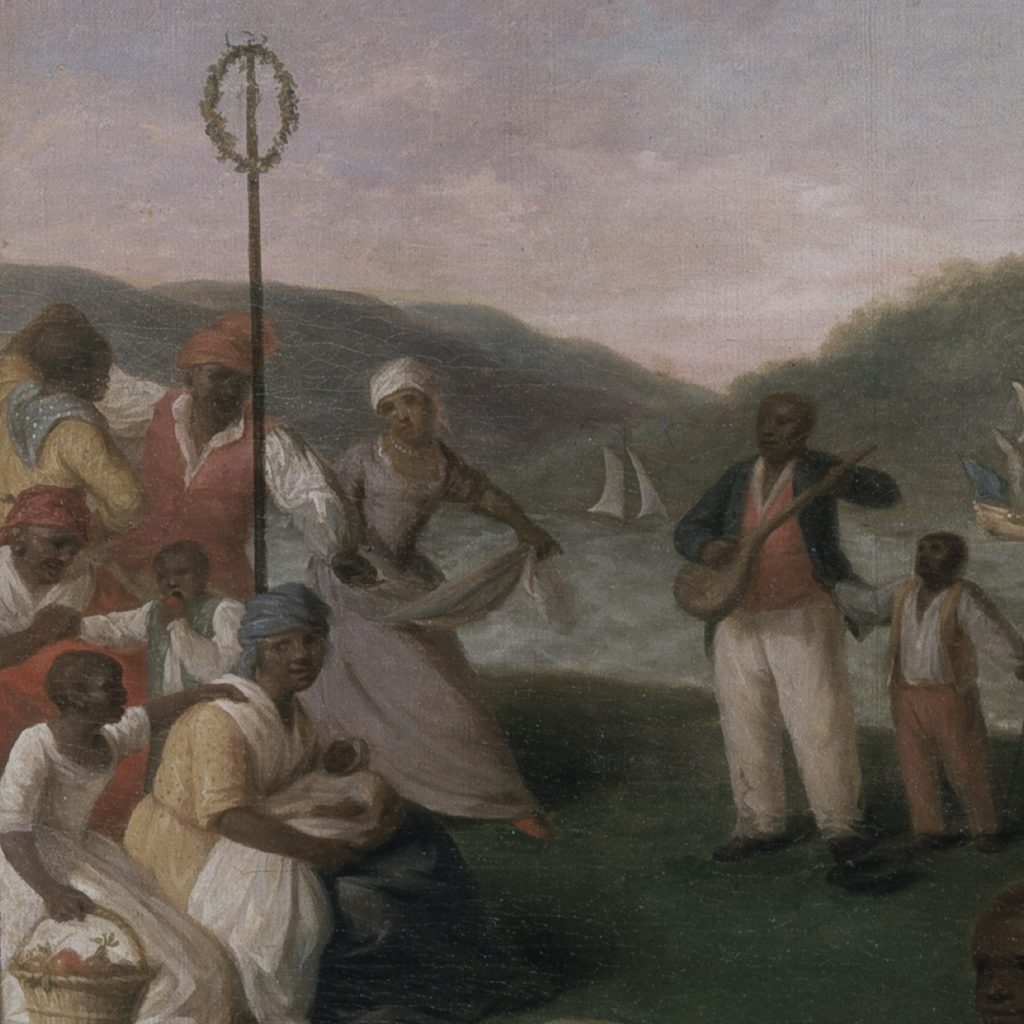 In the background of Liberty Presenting the Arts and Sciences, a joyful group of African Americans dance. What are they dancing around? Other than dancing, what about the group indicates that they enjoy the benefits of liberty? 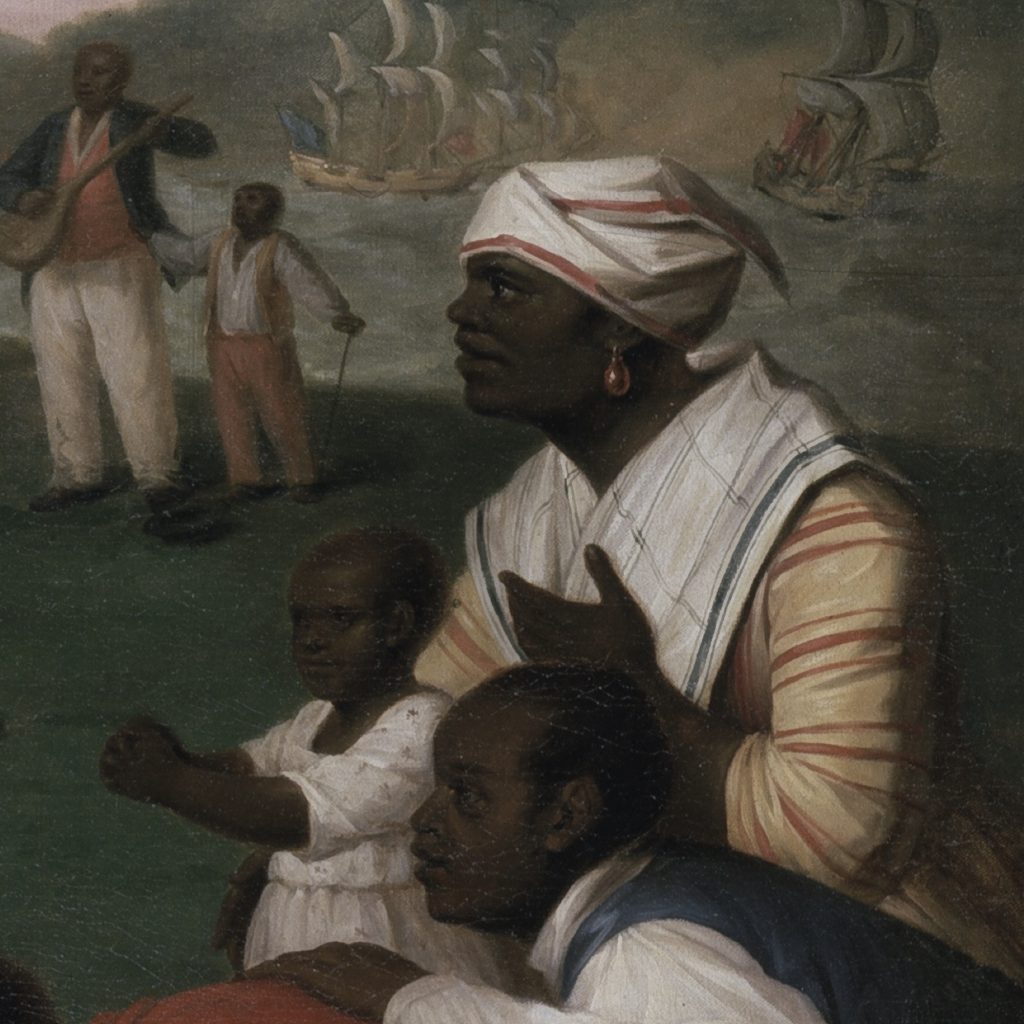 What about these people portrayed in Liberty Presenting the Arts and Sciences indicates that they are free? 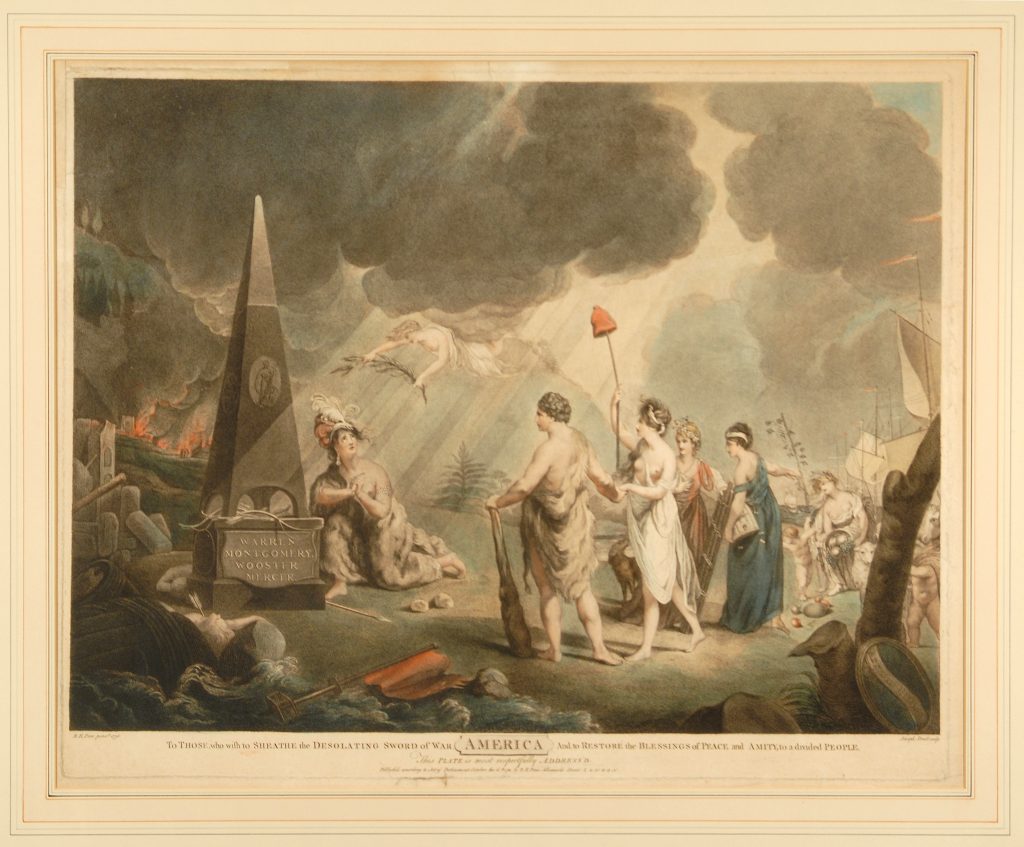 America To those, who wish to sheathe the desolating sword of war
Robert Edge Pine
1781
The American Revolution Institute of the Society of the Cincinnati