The definitive treaty of peace, signed by the American and British diplomats in Paris on September 3, 1783, brought a successful end to the War for American Independence and secured vast geographic boundaries for the “free, sovereign and Independent States.” It took two months for the news to reach the Continental Congress, then assembled in Princeton, New Jersey, and on November 2, General George Washington issued his “Farewell Orders to the Armies of the United States.” Although the military engagement between the United States and Great Britain was effectively concluded, the peace process was not finalized until both sides exchanged documents of ratification on May 12, 1784. The following month, Jean Lattré, an official engraver to Louis XVI, published a large-scale map titled Carte des Etats-Unis de l’Amerique suivant le Traité de Paix de 1783, the first French map—indeed the first map published anywhere—to delineate the full extent of the new United States of America after the ratification of the treaty.

The American Revolution Institute holds an exceedingly rare copy of the first state of the first issue of the 1784 Lattré map as part of the Robert Charles Lawrence Fergusson Collection. The map holds special significance to the Institute because the engraver included among the symbols in its cartouche a fine rendering of the Eagle insignia of the Society of the Cincinnati. The design imprints the title of the map on a large sail draped over the stern of a ship, over which a sailor hangs medallions bearing the Great Seal of the United States, the Society’s Eagle and the coat-of-arms of Benjamin Franklin, one of the negotiators of the peace treaty to whom the map is dedicated. A flag, bearing another impression of the Great Seal, flies from the ship’s mast. The Society’s Eagle on the cartouche is clearly modeled on the first Eagles made by Parisian craftsmen Nicolas Jean Francastel and Claude Jean Autran Duval in early 1784, and it is the earliest depiction of the Eagle to appear in print.

Jean Lattré (fl. 1743-1793) was, in 1784, an elder statesman among Parisian cartographers, who under license of the king had produced a large number of maps, atlases and globes through the mid-to-late eighteenth century. The ship’s sail motif was, in fact, a much-embellished adaptation of a design he had used on an earlier map of the northern Netherlands. The inclusion of the newly minted Eagle suggests a close acquaintance with upper levels of the king’s military establishment, as well as an understanding of the Society of the Cincinnati as a symbol of the French-American alliance.

For the cartographic details of his Carte des Etats Unis, Lattré drew heavily from John Mitchell’s Map of the British and French Dominions in North America (London, 1755), which had been the principal map used in the negotiations of the Treaty of Paris. (A marked-up copy of the Mitchell map brought back by negotiator John Jay survives in the collection of the New-York Historical Society.) Lattré’s map contains a few errors or out-of-date information, either perpetuated from the Mitchell map or introduced anew. But overall, the map accurately presents the territorial boundaries established by the peace treaty, which set the Mississippi River down to the thirty-first parallel as the western border of the United States, effectively doubling the size of the new nation. 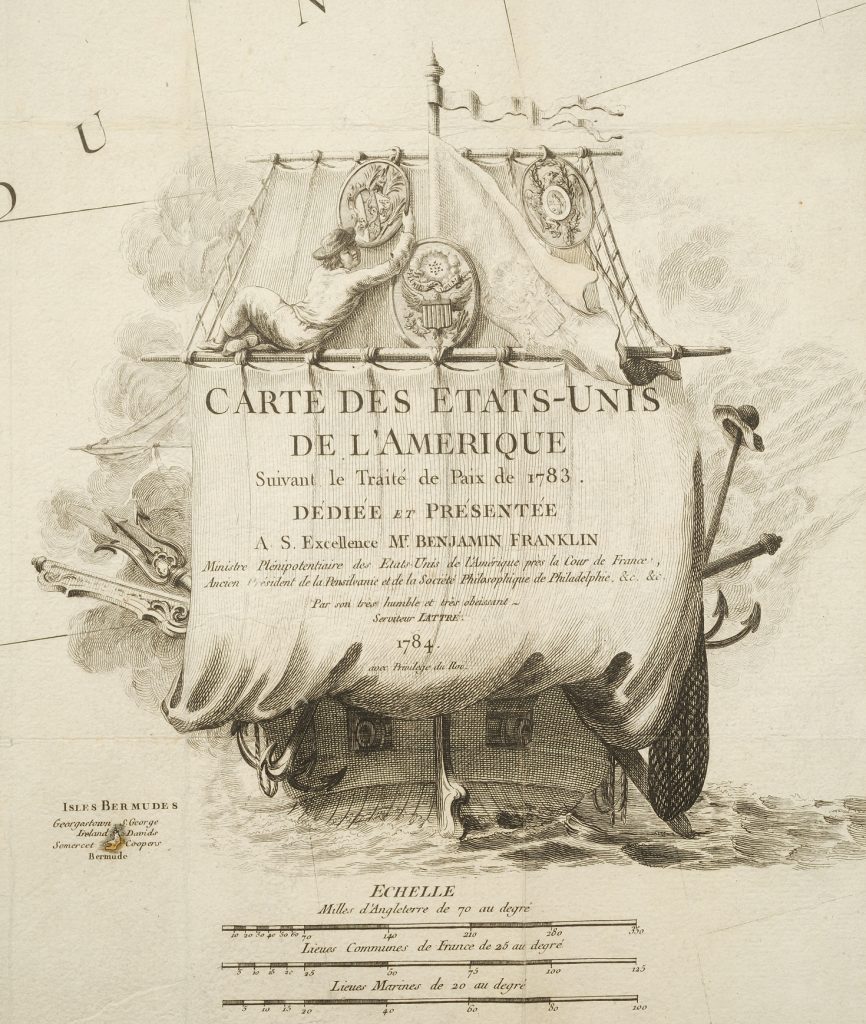 The cartouche of the map bears the Great Seal of the United States, the Eagle insignia of the Society of the Cincinnati and the coat-of-arms of Benjamin Franklin, to whom the map was dedicated.

The Institute’s copy of the Lattré map is one of only four copies known to include side panels of text, printed from separate plates and pasted to the left and right edges of the central sheet. Titled “Principaux Evenemens Militaire entre les Americains et les Anglois,” the panels give a full chronology of the war, year-by-year and state-by-state, from the battles of Lexington and Concord in Massachusetts in 1775 to the surrender of Cornwallis at Yorktown in Virginia in 1781.

The Lattré Carte des Etat-Unis is known to exist in three states. The first and second states of the map bear the imprint on the lower right margin: “A Paris: Chez Lattré, Graveur du Roi, Rue St Jacques, No 20.” The cartouche includes the engraver’s effusive dedication to Benjamin Franklin, minister plenipotentiary of the United States to the court of France and the best-known American in Paris. On the Institute’s copy of the first state of the map, the running list of Franklin’s credentials includes “Ancien President de Pensilvanie.” This line was altered in the second state of the map to read (abbreviated to fit into the same space): “anc. President de la convetió de Pensilvanie,” a reference to Franklin’s role as president of the Pennsylvania constitutional convention of 1776, and a correction probably made at Franklin’s request.

In the second state of the map, Lattré also added a table near the center of the lower margin listing the thirteen states and their capitals. He erroneously identified the capital of Virginia still as Williamsburg, though it had been moved to Richmond in 1780.

The Institute also owns a third state of the Lattré map. Although it retains the date 1784 on the cartouche, this version is thought to have been issued around 1800 because of several notable alterations. Lattré’s imprint on the lower right margin has been removed and the line “avec Privilege du Roi” on the cartouche has been replaced with the imprint of Delamarche, a cartographer who collaborated with Lattré and took over his stock after his death. The map itself has been updated to show the additions of both the city of Washington and the state of Vermont, though the Williamsburg error is still perpetuated.

In its scale, importance and rarity, the Lattré map takes its place with the maps of John Wallis (London, April 1783) and Abel Buell (New Haven, April 1784), which presented to the world the newly independent United States of America.

Explore the whole map on our digital library.