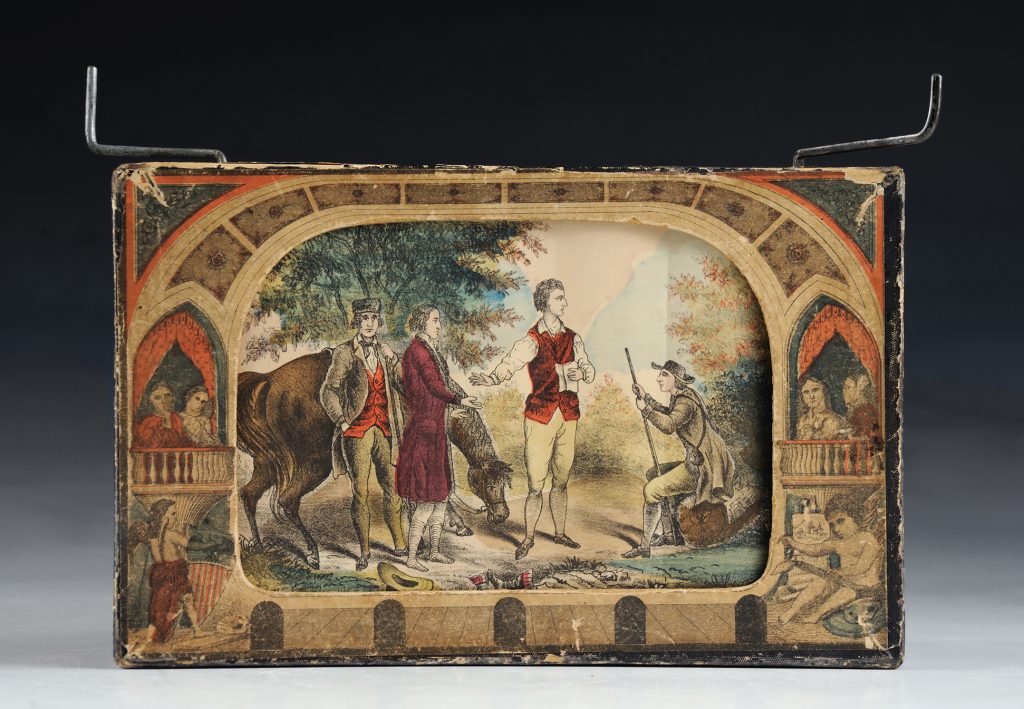 The Historiscope manufactured by Milton Bradley & Co. in the late nineteenth century features twenty-four lithograph scenes of colonial and Revolutionary America, including this popular image of the capture of Major John André.

In the nineteenth century, children often learned about the American Revolution through play. An early educational toy in the Institute’s collections, the Historiscope, demonstrates how children learned about American history at home. The scrolling set of lithographs set into a theatrical background allowed a child to present one image after the other to a gathering of family or friends. Half of the images depict scenes related to the American Revolution, from famous depictions of the Battle of Lexington and Concord and the British surrender at Yorktown, to now-obscure subjects like the siege of Quebec and Israel Putnam’s escape. The Historiscope, acquired for our Robert Charles Lawrence Fergusson Collection in 1992, reflects the people and events of the American Revolution that were most remembered in the second half of the nineteenth century.

Beginning in 1868, Milton Bradley & Company began mass-producing a colorful, boxed toy titled “The Historiscope: A Panorama & History of America.” The Historiscope consists of twenty-four hand-colored lithographs printed on a long strip of paper wound on rollers with simple metal handles, all set in a small cardboard box with an opening through which to view the images. Turning the handles moves the paper to bring the next image into view. To create a theatrical effect, the box around the opening was printed with a depiction of a stage and audience members. The Historiscope came with a script to accompany the images, an advertising poster and two tickets of admission to the show. “There is no toy that is more thoroughly appreciated by a little child in the half-hour before bed-time, as he sits on mamma’s or papa’s knee and turns the key which moves the pictures, meanwhile multiplying eager questions about each one,” imagined Milton Bradley in the company’s Game and Toy Catalogue for 1889-1890.

In 1860, lithographer Milton Bradley (1836-1911) combined his printing efforts with his interest in children’s toys and games to establish what would become one of the most successful and recognizable brand names in the United States. Milton Bradley & Company’s games—including “The Checkered Game of Life” (now simply called Checkers), cardboard jigsaw puzzles and pocket size games for Union soldiers—taught morals, history, geography and other subjects through play. The Historiscope was one of several toy panoramas the company produced, with others depicting a history of the American Civil War, zoo animals and fish species, and a visit of Santa Claus.

The scenes in the Historiscope begin with Christopher Columbus landing in the New World in 1492 and proceed mostly chronologically through colonial and Revolutionary America, ending with Cornwallis’ surrender at Yorktown in 1781. The images would have been familiar to viewers, as they were based on popular contemporary prints or paintings. The first twelve images depict scenes of the exploration and colonization of America, including the discovery of the Mississippi and the Hudson rivers (the former based on William Powell’s 1855 painting for the U.S. Capitol), Pocahontas saving John Smith, the landing of the Pilgrims, William Penn’s treaty with the Indians (based on Benjamin West’s 1771 painting or subsequent engravings) and the Charter Oak in Connecticut.

The other twelve images depict scenes related to the American Revolution that were most remembered in the nineteenth century. Some of these subjects remain iconic events of the Revolution today. The images of the Revolution in the Historiscope begin with ones of the Boston Tea Party, the Battles of Lexington and Concord and the Battle of Bunker Hill (based on John Trumbull’s 1786 painting or subsequent engravings). Later scenes depict the army at Valley Forge, the arrest of Major John André (based on Asher B. Durand’s 1845 painting) and Cornwallis surrendering at Yorktown.

Other images included in the Historiscope have fallen into obscurity in today’s popular memory of our nation’s founding. Early engagements the Siege of Quebec and Battle of Fort Sullivan (later renamed Fort Moultrie) were famous in the nineteenth century because of men who distinguished themselves during those fights—the martyred General Richard Montgomery killed in the failed American attack on Quebec in 1775, and the celebrated Sergeant William Jasper who recovered and remounted his regimental flag during the thick of the battle for Fort Sullivan in 1776. Three years later, Connecticut folk hero General Israel Putnam escaped from a British cavalry patrol at Horseneck—depicted in the Historiscope after an 1845 lithograph by E.B. and E.C. Kellogg. The latest subject pictured in the Historiscope is the Bunker Hill Monument, completed in 1842 and reproduced in numerous period prints. These people and events remain part of local lore in their native regions, but they no longer occupy a place in the national narrative of the Revolution.

The eight-page lecture that accompanied the Historiscope provided a script for the child presenting the scenes, inserting a little humor into the dense historical interpretations. The creators of the toy directed that “it is much better to have the lecture committed to memory than to read it, as the facts are impressed upon the memory. After this lecture may have become old, it is suggested that the young members of the family take turns in preparing original lectures which they shall deliver at the exhibitions. Interest may also be added to the performance, by the introduction of short pieces on the piano, appropriate to the several scenes.” The lecture transitioned from the colonial scenes to those of the Revolution with the statement, “We will now return to Boston to attend a little tea party.” It characterized the Battles of Lexington and Concord as “a most spirited representation of the first blow for liberty.” At Valley Forge, “with rude huts for shelter, oftentimes destitute of food, without blankets for the night, or sufficient clothing, the Patriot army passed the darkest hours of the Revolution.” And Israel Putnam “put spurs to his horse and plunged down a precipice” to escape the British at Horseneck. The script ended with the admission that the lecture, “although perhaps somewhat dry, will not do one of you any harm if you remember every word of it,” and a suggestion for further reading: “Any particulars that I have not mentioned, can be found in your Histories of the United States, which make very pretty light reading when the New York Ledger fails of coming to hand.”

The Historiscope was popular enough that Milton Bradley produced it into the 1890s. Today, this unassuming cardboard and paper toy presents complex layers reflecting how the American Revolution was remembered and popularized in the nineteenth century and how children learned about the Revolution’s people and events through play.

View the Historiscope in its entirety in the online museum collections database. 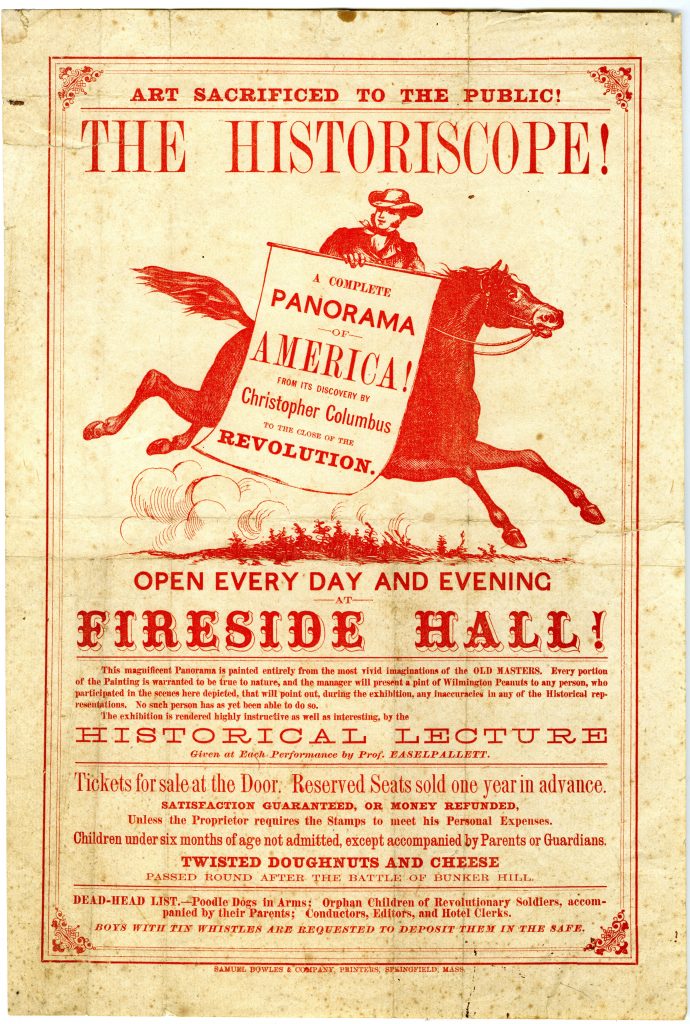 Art Sacrificed to the Public! The Historiscope!

The satirical text of the poster that accompanied the Historiscope declared: “This magnificent Panorama is painted entirely from the most vivid imaginations of the OLD MASTERS. Every portion of the Painting is warranted to be true to nature, and the manager will present a pint of Wilmington Peanuts to any person, who participated in the scenes here depicted, that will point out, during the exhibition, any inaccuracies in any of the Historical representations. No such person has as yet been able to do so.” It also promised “Twisted Doughnuts and Cheese Passed Round After the Battle of Bunker Hill.” 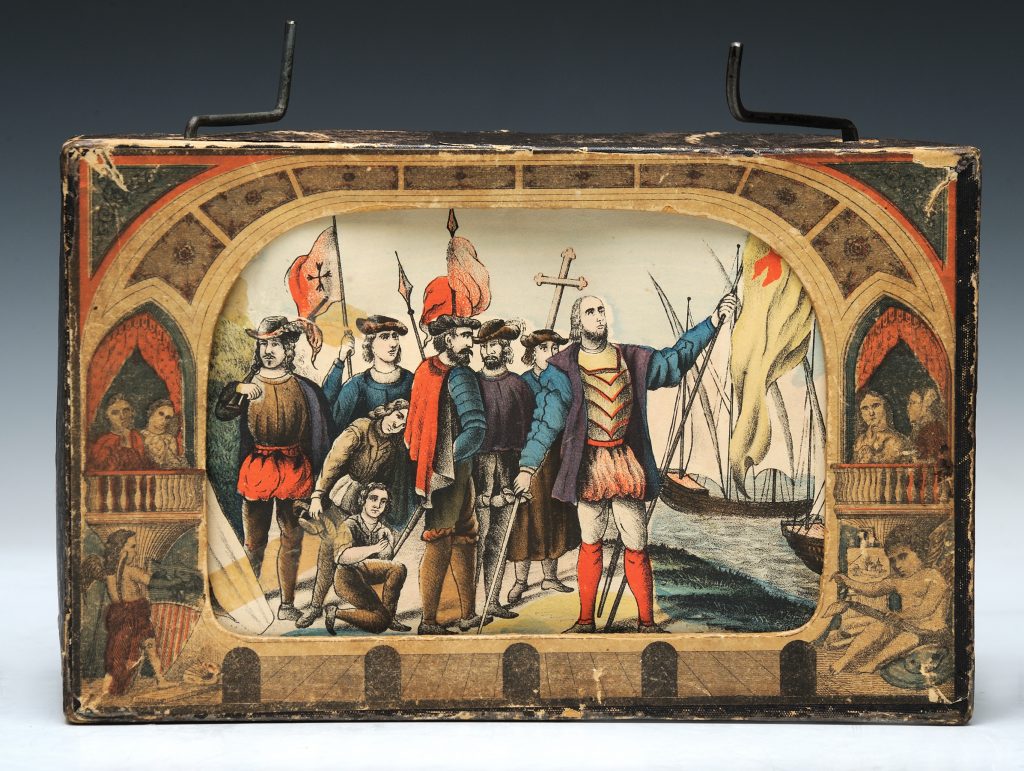 The first scene of a specific historical event in the Historiscope depicts Christopher Columbus landing in the West Indies in 1492. The scene is so large that it spans two lithographs pieced together. The image was based on John Vanderlyn’s 1847 oil painting that was commissioned for the rotunda of the U.S. Capitol. 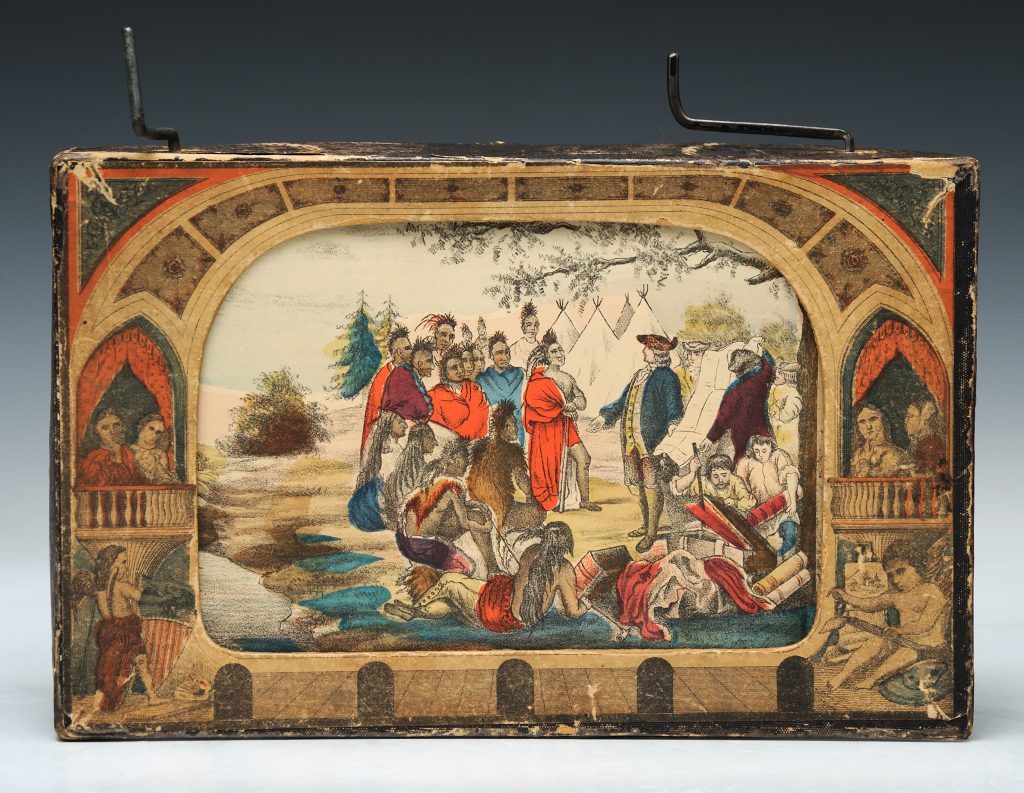 William Penn’s Treaty with the Indians

Benjamin West’s 1771 oil painting of William Penn’s Treaty with the Indians, painted nearly one hundred years after the event, was the source for this lithograph in the Historiscope. According to the Historiscope’s lecture, Penn’s treaty allowed him to found “a free and happy home for the persecuted Quakers.” 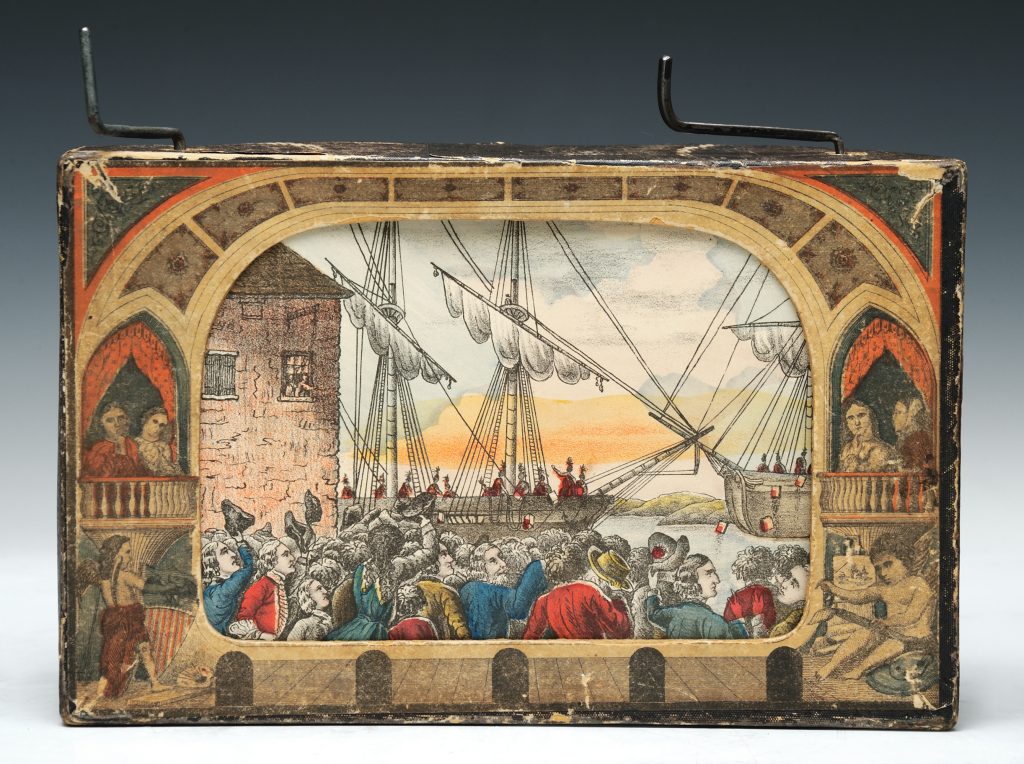 Milton Bradley’s interpretation of the Boston Tea Party of 1773 occupies more space in the Historiscope lecture than any other event of the Revolution. The image was probably based on Nathaniel Currier’s 1846 lithograph The Destruction of Tea at Boston Harbor. 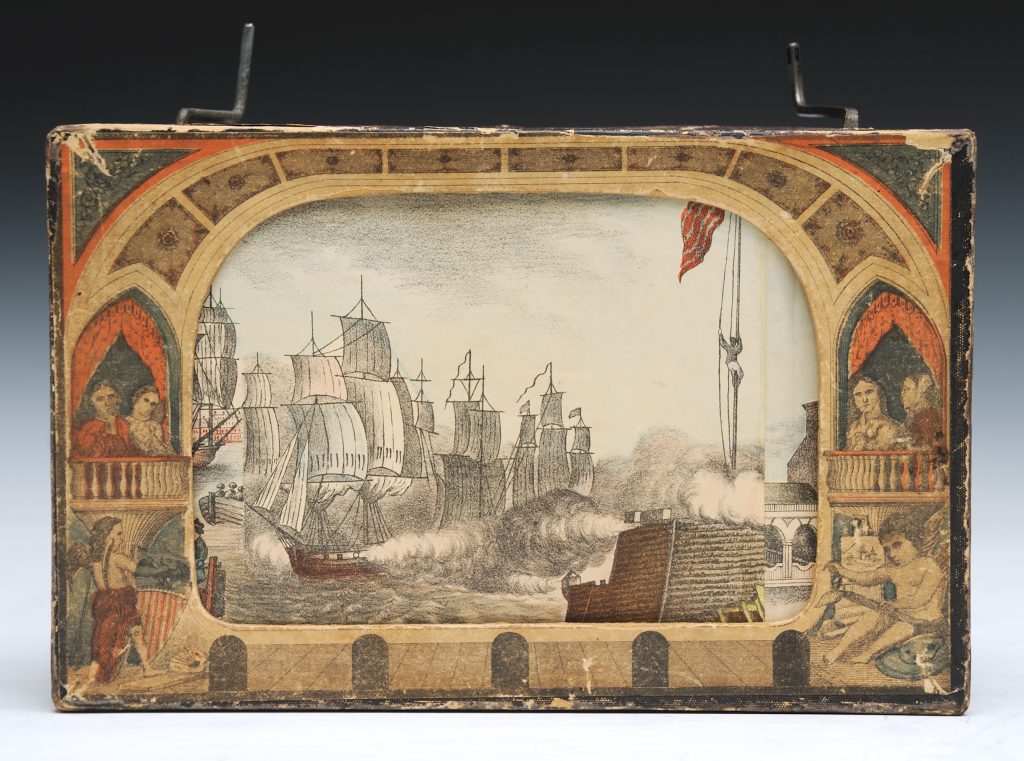 The Battle of Fort Moultrie

The Historiscope includes images without a famous or obvious source, alongside well-known depictions of events. Although several early nineteenth-century painted and printed depictions of the Battle of Fort Sullivan in Charleston Harbor, South Carolina, existed, none quite resembles this image. 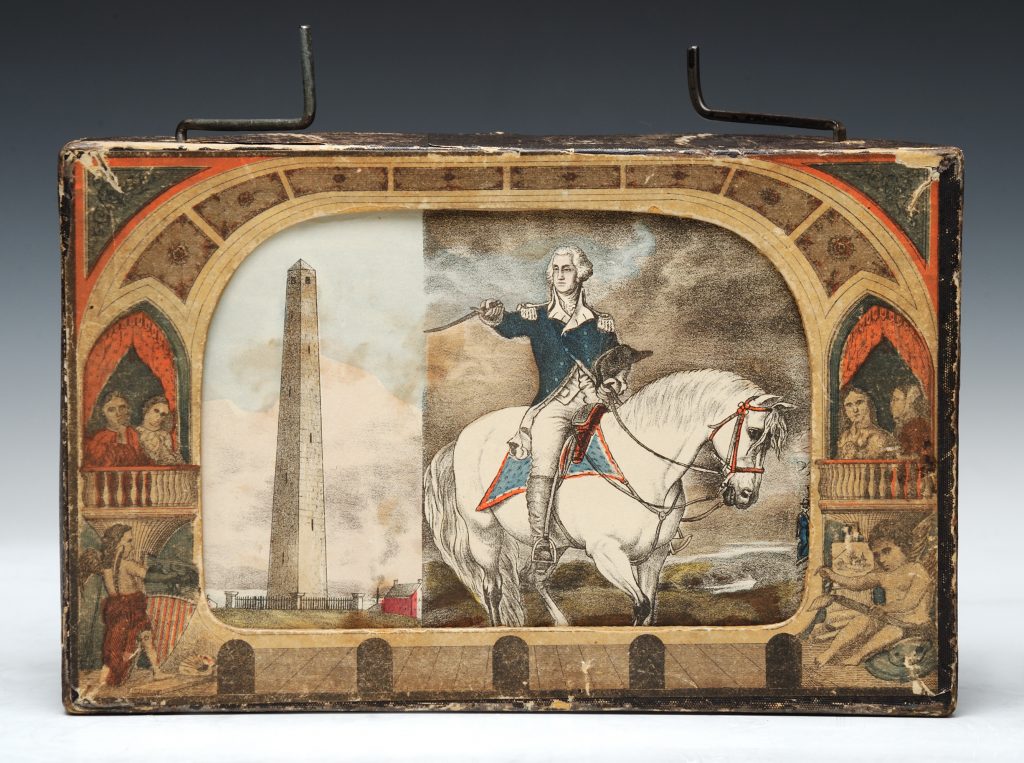 The depictions of the Bunker Hill Monument (left) and George Washington on horseback (right)—both narrow vertical images, neither of which could fill the frame by itself—appear together in a single frame. 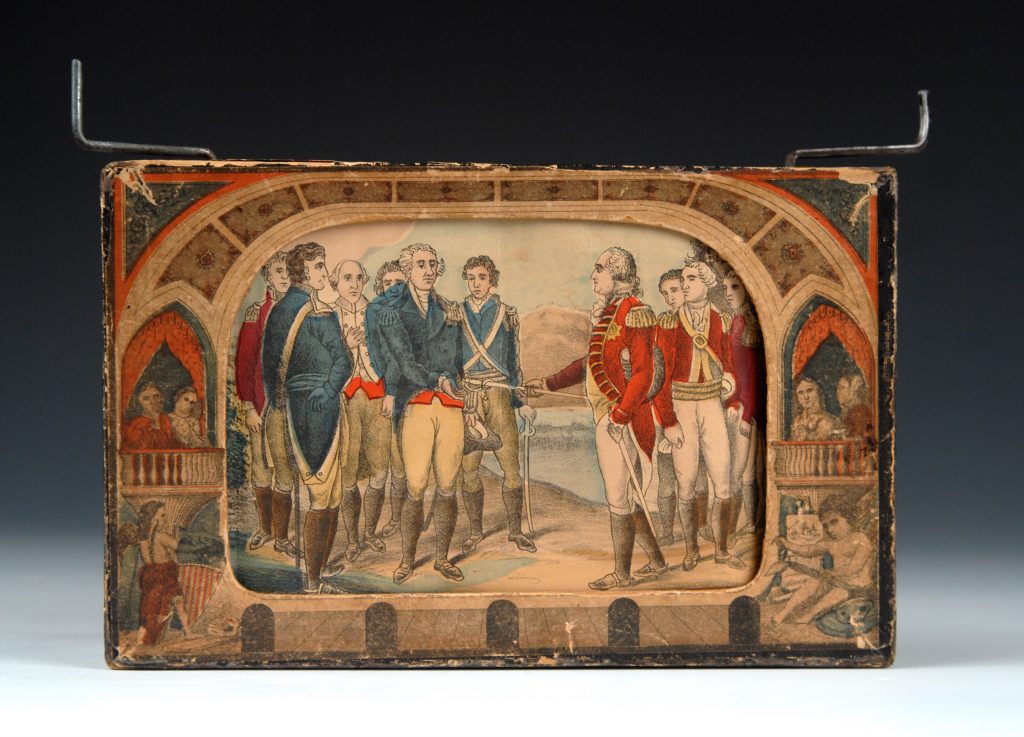 Cornwallis surrendering after the Siege of Yorktown

The Historiscope script culminates in the Siege of Yorktown and the accompanying scene of British general Cornwallis surrendering his sword. The script concludes matter-of-factly: “Although a few subsequent plundering expeditions were made, the Battle of Yorktown substantially ended the Revolutionary War.”
The American Revolution Institute