The armies and navies of the Revolutionary War employed hundreds of thousands of muskets, thousands of cannons, and countless uniforms, flags, tents, pistols, knapsacks, shoes and other objects. Most of these artifacts were eventually used up, destroyed, discarded, melted down or lost to decay. Relatively few survive. These ten are among the best of the best of the Revolutionary War artifacts in the care of American institutions, where they are exhibited to the public.

If we had extended the list to institutions abroad, we would undoubtedly have included artifacts in the magnificent Musée de l’Armée in Paris, as well as in institutions in Great Britain—among them HMS Victory, the flagship of the Channel Fleet during the Revolutionary War, now on view in Portsmouth, England. She is the only surviving man-of-war from the late eighteenth century and a reminder of the extraordinary power of the Royal Navy. One of her broadsides had more firepower than all of General Washington’s artillery combined.

These ten Revolutionary War artifacts reflect the desperate challenge of supplying American troops with the armaments and supplies they needed to overcome the British, the importance of French support for the American cause, the professionalism of British and German troops sent to suppress the American rebellion, and the personal struggles and triumphs of individual soldiers. Each is a key to a remarkable story.

Maj. John Pitcairn, who commanded the advance British force that marched into Lexington, Massachusetts, on April 19, 1775, carried this pair of ornately decorated, all-metal pistols on the first day of the Revolutionary War. He also lost them that day, on the retreat from Concord back to Boston. A Massachusetts captain purchased them from an auction of captured British equipment held shortly after the battle and presented them to Maj. Gen. Israel Putnam, who used them for the rest of his service in the Revolution. 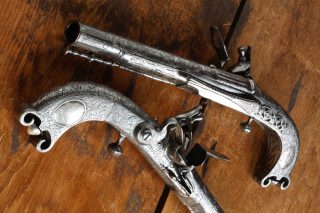 The Continental Army drove the British army and navy from Boston in March 1776 with heavy artillery mounted on Dorchester Heights, overlooking Boston Harbor. This French mortar—captured by the British in the French and Indian War—was among the ordnance from Fort Ticonderoga Henry Knox chose as part of his “noble train of artillery,” which was packed on sleds and drawn over snow and ice to George Washington’s army outside Boston. Identified by the French as a twelve-pouce mortar—using their unit of measure for length that corresponded to about thirteen inches—this iron artillery piece fired shells weighing nearly two hundred pounds. Suddenly faced by such powerful guns, the British left without firing a shot. This mortar was returned to Ticonderoga and then went north to support the invasion of Canada. Later placed aboard a gunboat in Benedict Arnold’s makeshift fleet on Lake Champlain, it burst during test firing. The fragments of the mortar were used as ballast on the gunboat Trumbull, which was captured by the British immediately after the Battle of Valcour Island in October 1776. The British used the Trumbull for the rest of the war. The same mortar fragments were used as ballast in a British warship captured by Americans in the War of 1812. This piece was recovered from the sunken remains of that vessel in 1949 and returned to Fort Ticonderoga, having done service in three wars.

Benedict Arnold commanded the defense of the Lake Champlain corridor in the summer of 1776—four years before his attempt to surrender West Point to the British made his name synonymous with treason. To deny the British the use of the lake to invade upstate New York, Arnold oversaw the construction of a fleet of eight makeshift gunboats. Philadelphia was fifty-four feet long and mounted three cannons and several small swivel guns. The mere presence of the American fleet forced the British to build their own warships to wrest control of the lake. Construction delayed the British advance until October, when the two flotillas met in the Battle of Valcour Island. British fire mauled Arnold’s fleet and sank Philadelphia. The other American vessels fled and most were scuttled or captured. The British won, but it was too late in the year for them to mount an offensive before winter set in. Philadelphia sat undisturbed on the bottom, preserved in the dark, cold, fresh water of the lake, until she was raised in 1935. She is the only American naval vessel from the Revolutionary War on public view. 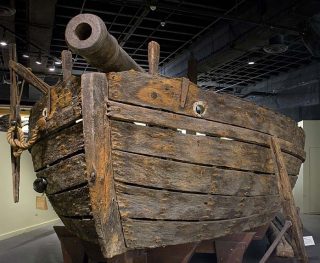 This Model 1766 Charleville musket was part of the cargo of the Amphitrite, which arrived at Portsmouth, New Hampshire, in April 1777 with the first large shipment of French arms and supplies. It was issued to a soldier of the Second New Hampshire Regiment of the Continental Army and is among a relatively small number of muskets from the Revolutionary War to bear regimental markings. The Second New Hampshire served in the Saratoga campaign and thereafter rejoined Washington’s army, spent the winter of 1777-1778 at Valley Forge, fought at the Battle of Monmouth in 1778, and served in Major General John Sullivan’s campaign against the Iroquois in 1779. The French government ultimately shipped over one hundred thousand surplus military muskets to America in support of the rebellion. Americans referred to them as Charleville muskets because many bore the mark of the royal armory at Charleville, though muskets of this design—readily distinguished from the standard British infantry musket by the bright metal bands fixing the barrel to the stock—were made at other French armories as well. 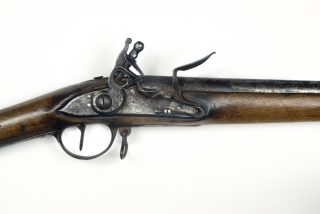 Museum of the American Revolution

George Washington’s first headquarters tent, made in Philadelphia, was worn out by 1778, when this surviving tent was manufactured for him in Reading, Pennsylvania, while the army was encamped at Valley Forge. Twenty-three by fourteen feet, Washington’s new tent included three small chambers, with space for sleeping and working. Washington used it from 1778 to 1783. According to his step-grandson, George Washington Parke Custis, who later owned the tent, Washington retreated to the tent “seeking privacy and seclusion, where he could commune with himself.” Other American generals campaigned with similar tents, but Washington’s is the only one known to survive. 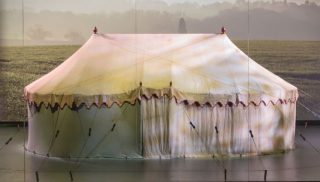 This powder horn was owned by Private Prince Simbo of Glastonbury, Connecticut, who enlisted in the Seventh Connecticut Regiment of the Continental Army in February 1778. Simbo was an African American—probably free when he joined the army, although he may have been enslaved earlier in life. The Seventh Connecticut served at the Battle of Monmouth and spent much of the latter part of the war guarding West Point, the key to the Hudson River Valley. Made from a hollow cow’s horn and used to carry loose black powder for firing muskets, his powder horn is carved with his name and hometown. It also bears the word “Liberty,” a poignant reminder of black soldiers’ struggle for personal, as well as national, freedoms. Few artifacts of black Continental soldiers survive. 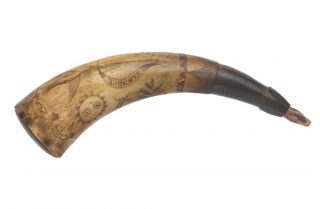 Society of the Cincinnati of the State of South Carolina

Now affectionately known as “George,” this six-pounder field piece is one of the few American-made bronze cannons to survive from the Revolutionary War. It was cast, probably using the bronze from larger French guns, in the Philadelphia foundry of James Byers in the spring or summer of 1777. Despite the desperate circumstances of the Continental Army, which was constantly in need of ordnance, Byers took the time to decorate the barrel with republican emblems, including a vindicta, a rod symbolizing emancipation from tyranny, and a pileus, or liberty cap. Both symbols were associated with Libertas, the Roman goddess of Liberty. The cannon was probably issued to Washington’s army in time for the Battle of Brandywine in September 1777, but its fate thereafter is unclear. In the early nineteenth century the barrel was one of two used as gateposts in an ornamental fence surrounding a monument to Lt. Col. William Washington in Charleston, South Carolina. Removed from the fence and conserved by the South Carolina Society of the Cincinnati, the cannon is now on long-term display at the American Revolution Institute. Its mate, affectionately known as “Martha,” is on long-term display at the Charleston Museum. 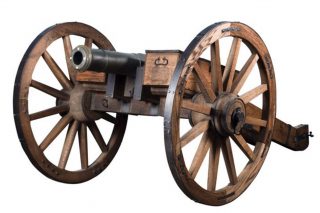 Flag of the Ansbach-Bayreuth Regiment

Six German principalities contributed some thirty thousand troops to the British forces that fought the Revolutionary War—often referred to collectively as Hessians, even though only two of the six principalities were located in the large landgraviate of Hesse. The regiment from Ansbach-Bayreuth arrived in New York in June 1777 and was transferred south in April 1781 to reinforce British troops in Virginia. The unit had eight hundred men at Yorktown and served as the rear guard to protect Cornwallis’ failed escape across the York River. The regiment surrendered this flag during the capitulation ceremony on October 19, 1781. The Americans sent it to the Continental Congress in Philadelphia as a trophy of war. 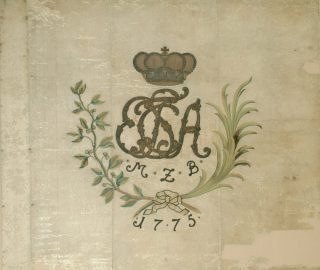 Lt. Col. Tench Tilghman, an aide-de-camp to George Washington, wore this uniform when he presented Congress with Washington’s report of the British surrender at Yorktown. American uniforms are among the rarest artifacts of the Revolutionary War. Soldiers wore their uniforms, or what remained of them, home at the end of the war. Most were eventually worn out and discarded. Tilghman’s uniform is blue with buff facings, the standard for general and staff officers. Artillery officers wore coats with scarlet facings, and infantry regiments wore coats with facings of buff, white, blue or red, depending on their state—at least according to regulations. Cloth was often so scarce that Continental Army uniforms were never truly uniform. Tilghman’s uniform is one of only three Continental officer’s uniforms known to survive. 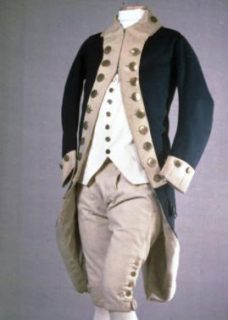 The first American military decoration for enlisted men, the Badge of Military Merit, was created by George Washington on August 7, 1782. The award recognized distinguished conduct and was intended to encourage “virtuous ambition” and “every species of Military merit.” Soldiers honored with the award, his orders said, “shall be permitted to wear on his facings over the left breast, the figure of a heart in purple cloth, or silk, edged with narrow lace or binding.” This badge awarded to Sgt. Elijah Churchill of the Second Continental Light Dragoons is one of only two eighteenth-century examples known to survive. The decoration fell out of use after the Revolutionary War but was revived in 1932 as the Purple Heart. 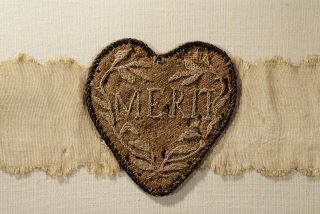