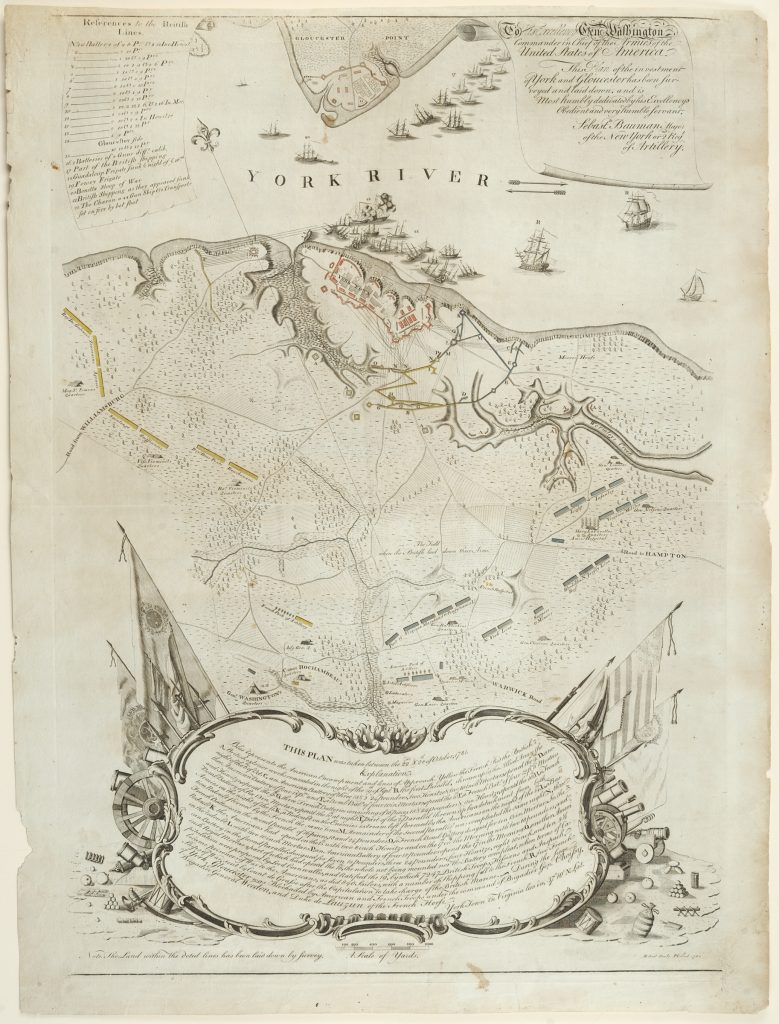 Based on careful surveys taken on the spot immediately after the British surrender, Sebastian Bauman’s Plan of the Investment of York and Gloucester was the first published American map documenting the decisive allied victory at Yorktown. Bauman’s Plan was, moreover, the most detailed battlefield map of the Revolutionary War drawn by an American engineer. Published in Philadelphia in 1782, it was the source for many later maps of the Siege of Yorktown. With its detailed treatment of fields, wetlands, woodlots and roads, as well as the camps and fortified line of the American, French and British forces, it is an exceptionally valuable document for understanding the siege and for appreciating and preserving the battlefield.

Maj. Sebastian Bauman of the Second Continental Artillery Regiment was especially well suited to the task of creating this great map. Born at Frankfurt-am-Main, Germany, in 1739, he was educated at Heidelberg and trained in artillery and topographical engineering in the Austrian military service. Bauman immigrated to America in time to serve in a New York militia unit during the French and Indian War. He settled in New York City and made the cause of American liberty his own. His signature appears on a 1776 roster of officers of the First Battalion of New York Independents pledging their willingness to “enter in the Service of their Country.” In March of that year he was appointed captain of the Continental artillery company raised in New York. Originally attached to Col. Henry Knox’s regiment, Bauman’s company was transferred to Col. John Lamb’s artillery regiment in January 1777. He was promoted to major in 1778 and became artillery commander at West Point in 1779. Maps of the West Point fortifications drawn by Major Bauman were among the papers stolen by Benedict Arnold and discovered in the boot of his co-conspirator, John André, when André was captured behind American lines.

In 1781, Bauman marched south with General Knox to Yorktown, where he commanded one of the batteries during the siege and witnessed the formal surrender ceremony on October 19. Three days later, Major Bauman took to the field again, this time with his surveying instruments, and within a week’s time he had completed a detailed survey of the shoreline, battlefield and encampments.

Over the next several months Bauman collaborated with a Philadelphia engraver, Robert Scot, to produce a large-scale map to be sold to the public by subscription. A prospectus of the project appeared in the New Jersey Journal of January 30, 1782:

Major BAUMAN of the New York or Second Regiment of Artillery Has drawn a MAP Of the Investment of York and Gloucester, in Virginia Showing how those points were besieged in form by the allied army of America and France; the British lines of Defense, and the American and French lines of approach; with part of the York River, and the British ships, as they then appeared sunk in it before York-Town; and the whole encampment in its vicinity.

This MAP, by desire of many gentlemen, will shortly be published in Philadelphia, in order that the public may form an idea of that memorable siege. Those gentlemen who wish to become subscribers, will apply to Captain Arnold, in Morristown, and to the printer hereof; where the conditions will be shown and subscription money be received.

The publication of the map was apparently delayed for several months. A similar announcement soliciting subscriptions appeared in the New York Packet, and the American Advertiser in March 1782, and it was not until June that Bauman wrote to General Steuben (who had ordered forty copies) to let him know that it was finally being printed.

The partnership of Bauman and Scot produced a map unmatched in scale and detail in Revolutionary America. The elaborate design of the engraving is also unique for an American map of this period and reflects Bauman’s European background and training. A trompe-l’oeil scroll at the top right bears the map’s dedication “To His Excellency Genl Washington, Commander in Chief of the Armies of the United States of America,” and is boldly signed by “Sebastn Bauman, Major of the New York or 2nd Regt of Artillery.” A similar scroll at the top left gives the key to the numeric indications of the positions of the British lines at Yorktown and Gloucester, as well as several British ships in the York River, including “The Charon, a 44 Gun Ship & 2 Transports set on fire by hot shot.” The lower third of the map is dominated by a rococo cartouche flanked by an array of American and French flags, cannon and other accoutrements of war. Its text gives the “Explanation” of the progress of the siege, day-by-day and position-by-position, color-coded (blue for the Americans, yellow for the French and red for the British) and keyed to alphabetic indicators on the battlefield. The narrative of the action culminates with “Capitulation… Ratified the 19th, by which 7247 British Troops, Hessians and Anspach, became prisoners of War to the Americans, as did 840 sailors, with a number of shipping fall to the French.”

Unlike the cartographers of the British army, whose movements would have been restricted after the surrender, Bauman had access to the whole area, including the sites of the American and French encampments in the countryside south of the scene of action. He depicted the landscape in extraordinary detail, including woodlots and tree lines and other features rarely depicted in maps of the period. In the southwest corner of the map, General Washington’s quarters are indicated with a marquis tent, as are General Rochambeau’s across the road. General Lafayette’s quarters were adjacent to the American hospital on the southeastern side. Bauman would have been well familiar with the “American Park of Artillery,” which he marked with a row of tiny cannon, an area that included a magazine and laboratory. But for all its rich documentary detail, Bauman and Scot’s masterpiece was ultimately a celebration of the American victory. The map’s powerful, swirling design draws the viewer to its triumphant center—“The Field where the British laid Down their Arms.”

After the Yorktown victory, Bauman returned to West Point, where he remained in service as commander of a battalion of artillery until June 1784. He joined the New York State Society of the Cincinnati and was an active member in its early years. But his transition back to civilian life in New York City proved difficult. In May 1789, Bauman wrote to President Washington seeking assistance: “I beg your Excellency to place me in a Different mode of life, Different from that I now Unsuccessfully pursue, for want to that Capital which (I may honestly say) I have Sacrificed from zeal, long service, and in daily pursuit for the Honor of my Country.” Washington appointed him federal postmaster of the City of New York, a position he held until his death in 1803.

Bauman’s Plan was the first map and most ambitious project the engraver, Robert Scot, had yet undertaken. Originally from Edinburgh, Scotland, Scot had worked for several years in Fredericksburg, Virginia, before setting up shop in Philadelphia in 1781. His imprint in the bottom margin of the monumental map helped establish him as one of city’s leading engravers. In 1784, the Society of the Cincinnati engaged Scot to engrave the text on the copperplate of the diploma, which had recently been delivered from France by Pierre L’Enfant. Scot is best remembered for his designs of some of the most beautiful early American coins in his role as the first chief engraver of the United States Mint, a position he held from 1793 to 1823.

Several other contemporary maps of the Yorktown siege drew on Bauman’s Plan. In late 1782, Andrew Beers published The United States Almanack, for the Year 1783 that featured on its cover a primitive woodblock print with many similar elements. David Ramsay’s History of the Revolution of South-Carolina (Trenton, N.J., 1785) included a much finer plate based on Bauman’s work, which was in turn copied in William Gordon’s History of the Rise, Progress, and Establishment, of the Independence of the United States of America (London, 1788). The most accurate and ambitious copy of Bauman’s Plan was created by John Francis Renault and engraved by Benjamin Tanner in honor of the marquis de Lafayette’s return visit to America in 1825.

See the map in the Institute’s Digital Library.

Explore other important maps of the period drawn from our collections and those of other institutions in Ten Great Revolutionary War Maps, part of our series Treasures of the American Revolution.