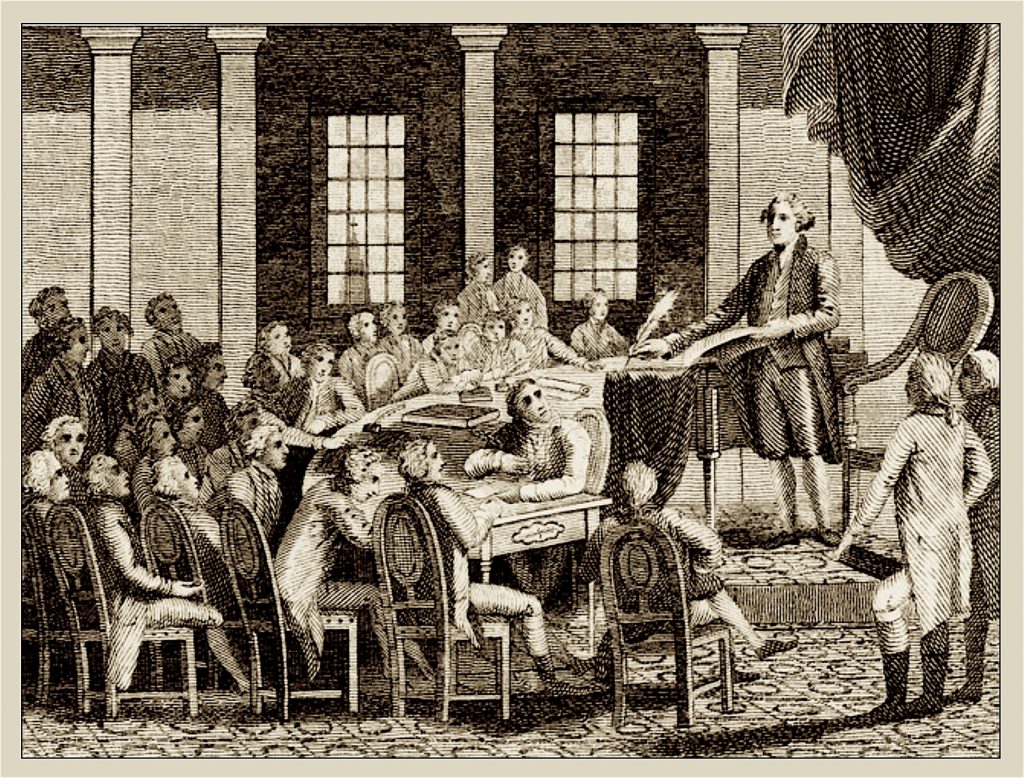 In 1787 Thomas Jefferson was in Paris, wasting his time as ambassador from a government that had so little authority that the French government could safely ignore it.

Many of Jefferson’s American friends, including James Madison, were deeply concerned about violent unrest driven by high taxes and the burden of debts compounded by deflation. In Massachusetts those toxic conditions drove thousands of farmers to take up arms to stop debt collection, leading the state government—inexperienced, insecure, and imperious—to impose order at the point of a bayonet.

Jefferson was not deeply concerned about the unrest in Massachusetts, known then and since as Shays’ Rebellion. He agreed with Madison that the insurgents had committed “absolutely unjustifiable” acts, but he thought “they were founded in ignorance, not in wickedness.” The insurgents did not understand that their distress was the result of economic conditions the government was incapable of addressing.

Although the people were sovereign, Jefferson wrote, they would not always be right. “The people can not be all,” he wrote, “and always, well informed.” In a government in which the people have a just degree of influence a certain amount of what Jefferson called “turbulence” was inevitable. But Jefferson was concerned that the unrest might lead reformers to conclude “that nature has formed man insusceptible of any other government but that of force, a conclusion not founded in truth, nor experience.” A government based on force—including monarchy in all its forms—was inherently unjust. “It is a government of wolves over sheep.”

The people of the world have been governed, for most of history, by wolves. Jefferson had confidence in the capacity of ordinary people to govern themselves.

So did Madison, who spent that summer at the Federal Convention in Philadelphia, shut up through the unforgiving summer heat in the Pennsylvania State House with the windows closed to prevent anyone from eavesdropping. Madison and the other leading delegate, James Wilson of Pennsylvania, were intent on creating a new kind of government—republican in form and spirit, national in scope, and endowed with authority that would enable it to protect the interests of Americans in a world of predatory imperial powers.

At the heart of their plan was a bicameral legislature consisting of a larger lower house and a smaller upper house—later the convention would decide to call them the House of Representatives and the Senate—that would have the power to tax, regulate commerce, impose tariffs, coin money, and make laws governing all matters not delegated to the states. Members of the lower house would be elected by the people in direct proportion to the population, each member representing an equal number of citizens.

This proposal, which gave substance to the abstract principle of popular sovereignty, was extraordinary. It has since become commonplace, but at the end of the eighteenth century no national legislature had ever been constituted in this way. The British House of Commons, in which members were elected to represent constituencies that varied in size from a few people to thousands and in which many thousands of people went unrepresented, was archaic by comparison.

A government that aims at the public good must begin by finding out the people’s numbers. Hard as it may now be to imagine, eighteenth-century governments did not know with any degree of certainty how many people they governed or where they lived. To the extent they felt any need to know, they relied on estimates and guesswork. To elect a national legislature based on population required counting every American and repeating the process periodically to keep representation in balance with a growing and moving population. The effort to do so reflects the confidence of the Enlightenment in the potential of governments based on rational principles to serve their people rather than subjugate them and the faith of the Enlightenment in the fundamental equality of people.

Many of the delegates had misgivings about what Madison and Wilson proposed, because many of the problems of the moment seemed to flow from what they regarded as the errors of popularly elected state legislatures. “The people,” Roger Sherman said, “should have as little to do as may be about the government” because “they want information and are constantly liable to be misled.” Vesting the people with sovereign power, skeptical delegates believed, was the problem.

Madison and Wilson argued that vesting the people with sovereign power was the solution. While acknowledging that democratically elected state legislatures were acting unwisely, they held the real problem was that no government possessed sufficient authority to address the nation’s ills.

Madison credited James Wilson with making the strongest case “for drawing the most numerous branch of the Legislature immediately from the people. He was for raising the federal pyramid to a considerable altitude, and for that reason wished to give it as broad a basis as possible. “No government,” Wilson said, “could long subsist without the confidence of the people. In a republican Government this confidence was peculiarly essential.” Confidence would come, Wilson contended, from a legislature that was “the most exact transcript of the whole Society.”

We look on their work today with the detachment that comes from knowing how the story came out. They managed to draft a constitution that became what is now the world’s oldest continuously functioning written frame of government. We live with its peculiarities and its compromises and imperfections while giving insufficient attention to the magnitude of their achievement and the living ideal on which it is ultimately based—the source of their conviction that the people, though they might not always be well informed, would ultimately choose well.

Madison and Wilson, along with the absent Jefferson, were trained in the moral philosophy of the Scottish Enlightenment. They were convinced by the writings of Francis Hutcheson, David Hume, and other Scottish thinkers that people possess a natural moral sense that guides them and allows them to make judgements quickly and intuitively, without close study or the application of acquired learning.

In the summer of 1787, Jefferson explained the moral sense in a letter to his nephew Peter Carr, a student at the College of William and Mary, advising him to skip lectures on moral philosophy:

I think it lost time to attend lectures in this branch. He who made us would have been a pitiful bungler if he had made the rules of our moral conduct a matter of science. For one man of science, there are thousands who are not. What would have become of them? Man was destined for society. His morality therefore was to be formed to this object. He was endowed with a sense of right and wrong merely relative to this. This sense is as much a part of his nature as the sense of hearing, seeing, feeling; it is the true foundation of morality . . . The moral sense, or conscience, is as much a part of man as his leg or arm. It is given to all human beings in a stronger or weaker degree, as force of members is given them in a greater or less degree. It may be strengthened by exercise, as may any particular limb of the body. This sense is submitted indeed in some degree to the guidance of reason; but it is a small stock which is required for this: even a less one than what we call Common sense. State a moral case to a ploughman and a professor. The former will decide it as well, and often better than the latter, because he has not been led astray by artificial rules.

This optimistic view of the capacity of ordinary people to make good moral and ethical judgements is the most important justification of popular sovereignty—the defining ideal of the Federal Constitution—and remains the ultimate foundation of American democracy.

The practical implementation of a theory of popular sovereignty on a national scale was so new that it baffled many of the delegate who gathered in Philadelphia for the Federal Convention. Their anxieties obscured their ability to imagine the future of democratic government. None approached that future with as much confidence as James Wilson, who imagined, he said, “the influence which the Government we are to form will have, not only on our people and their multiplied posterity, but on the whole Globe.” He was, Wilson admitted, “lost in the magnitude of the object.”

The future of the Constitution depends on the people, who should remember Jefferson’s admonition that the moral sense needs to be exercised. Above all things,” Jefferson concluded,

lose no occasion of exercising your dispositions to be grateful, to be generous, to be charitable, to be humane, to be true, just, firm, orderly, courageous etc. Consider every act of this kind as an exercise which will strengthen your moral faculties, and increase your worth.

No better advice can be offered to people determined to preserve their freedom.

Above: George Washington presides over the Federal Convention in this engraving from A History of the United States of America, by Charles Goodrich, a pioneering American history textbook published in 1823.