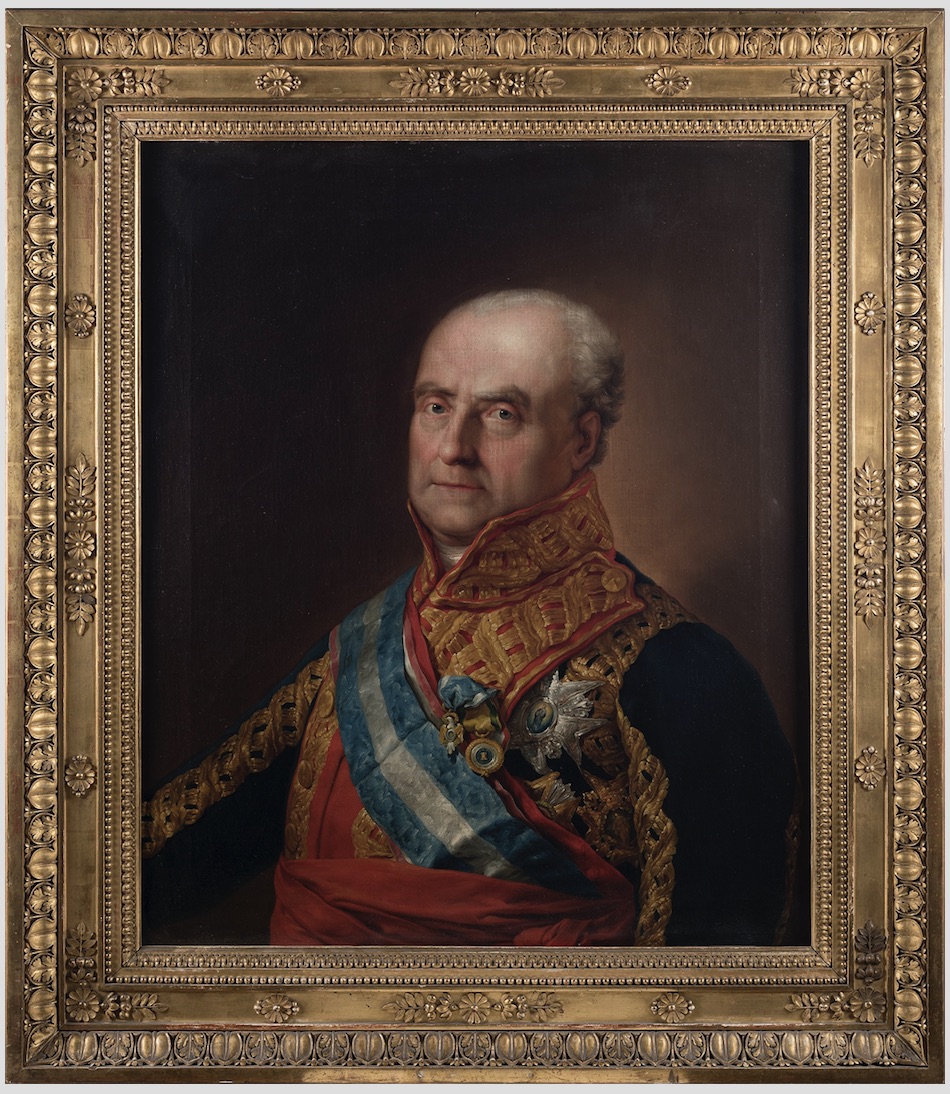 The British surrender at Yorktown is remembered as a triumph for George Washington and the comte de Rochambeau. Students of the siege know that Admiral de Grasse played a central role in the allied victory, Alexander Hamilton distinguished himself in a daring attack on the British lines, and Henry Knox directed the artillery bombardment that compelled the British surrender. But Claude-Anne de Rouvroy, marquis de Saint-Simon-Montbléru, is not much remembered. He should be.

When Admiral de Grasse and his French fleet arrived off the Virginia coast on August 29, 1781, they did more than block the British Royal Navy from rescuing the army of Lord Cornwallis. On September 2 they landed some 3,300 French soldiers under the command of Saint-Simon, a career military officer who had long looked forward to joining the fight for American independence. “I would be very glad to be under your orders,” Saint-Simon had written to Rochambeau on January 7, 1781, from Martinique, where he was waiting to cooperate with the Spanish in a campaign against British colonies in the Caribbean. “I believe your campaign will be warmer than ours,” he added. In May Rochambeau appealed to de Grasse to sail north, and bring with him Saint-Simon and his men.

Saint-Simon and his command disembarked at Jamestown—the site of the original English settlement in Virginia—and marched across the peninsula between the James and York rivers, through Williamsburg, to join American troops under the command of the marquis de Lafayette. Together Lafayette and Saint-Simon blocked the roads leading out of Yorktown, pinning the British army in its fortified lines until Washington and Rochambeau arrived weeks later to lay siege to the enemy. Cornwallis pretended to despise what he called “Saint-Simon’s raw and sickly troops,” adding that they were nothing more than “undisciplined vagabonds collected in the West Indies.”

In fact Saint-Simon commanded an outstanding corps of French troops, consisting of the regiments of Gâtinais, Agenais and Touraine. Writing in the Pennsylvania Packet on September 18, 1781, a correspondent reported from outside Yorktown: “Let me make you acquainted with Major-General the Marquis of Saint-Simon, and the French Army: you have not seen troops as universally well-made, so robust, or of such appearance as those General Saint-Simon has brought to our assistance . . . . I do not pretend to know the secrets of our commander, or I would tell you what is to be done; I pretend, however, to see a great general in the Marquis de Saint-Simon, an affectionate politeness in his officers towards ours, and generation impatience in the French Army to complete the Gordian knot in which our second Fabius, Lafayette, has been entangling his lordship.”

With the other senior allied generals, Saint-Simon took his turns commanding the day’s operations all along the lines. On October 8-9 he directed artillery fire that drove British warships to flee across the York to Gloucester. On October 12-13 he oversaw the construction of the second parallel and associated redoubts and communications trenches. Finally, on October 16-17, he commanded the lines as the two sides exchanged constant fire. An exploding British shell wounded his ankle on October 16, but he refused to leave the lines until the exhausted and beaten British posted a white flag and asked for a parley to discuss surrender.

With difficulty, Saint-Simon mounted his horse to take part in the surrender ceremonies. Shortly thereafter, he sailed back to the West Indies with the French navy. Saint-Simon took with him the gratitude of George Washington, who wrote to the marquis on October 24, 1781, shortly before he departed:

I cannot suffer you to leave this Country, without testifying my sense of the distinguished services which you have rendered the Allies during your stay.

The Division which you command, animated by your orders and deriving every advantage from your dispositions, executed their debarkation and junction with the American troops, with a promptness and security which were essential to that interesting operation.

The military ardour and perfect discipline for which they have been conspicuous in the seperate Attack and during the other operations of the Siege, and your measures, as judicious and vigorous on all occasions, have secured you the esteem of this country; they will at all times claim my particular applause, and I entreat you to accept my warmest acknowledgements.

The wound he sustained at Yorktown grew infected and healed very slowly. After returning to France, he wrote to the marquis de Castries from Paris on May 27, 1782, that “my wounds are beginning to heal, and I am permitted to go out a little.”

Saint-Simon had earned what Washington called “the esteem of this country,” but Americans quickly forgot about him. Mention Saint-Simon and even people who know a good deal about the American Revolution will ask “who?”

Saint-Simon was born in 1743 at the Château de la Faye in southwest France. Trained in the military academy at Strasbourg, he rose through the officer corps to command of the Poitou Regiment by 1771 and to marechal de camp (the equivalent of a brigadier general) in 1780, when he was dispatched to the West Indies in command of the three regiments he would lead at Yorktown. His assignment was to cooperate with the Spanish army in an attack on British possessions in the Caribbean. Recognizing the potential for decisive action in North America, he seized the opportunity to join de Grasse when he sailed for Virginia in August 1781.

After returning home in 1783, Saint-Simon joined the Society of the Cincinnati and was appointed governor of Saint Jean Pied de Port on the Spanish border. In 1789 he was elected as a deputy of the nobility to the Estates General, in which he was a determined defender of the monarchy and the nobility. As chaos spread in 1791, he emigrated to Spain, where he raised a legion of émigrés and led it against the French revolutionary forces in the Pyrenees.

In 1793, when Spain went to war with France, Saint-Simon was appointed a general in the Spanish army. He remained in the service of Spain for the remainder of his military career. Wounded several times, he remained in the field almost continuously for fifteen years. In 1803, King Charles IV made him a grandee of Spain of the first class, the highest rank in the Spanish nobility.

His standing with the Spanish crown was of no consequence to the French Empire, which regarded him as a criminal. Wounded and captured while defending Madrid in 1808, he was sentenced to death for treason. Before the sentence was carried out, Saint-Simon’s daughter begged Napoleon for mercy. The emperor commuted Saint-Simon’s sentence to life imprisonment, from which Saint-Simon was released in 1814 when Napoleon fell from power. Ferdinand VII, the restored king of Spain, made him a duke and promoted him to capitán general, the highest rank in the Spanish army.

He was then seventy-one years old. He had spent more than fifty years in the army, most of it in active service, had been wounded at least four times, and had been imprisoned for six years. His French estates long since confiscated and sold, he retired to Spain, where he lived for the remainder of his life in Madrid, where he died in 1819. Americans took no note of his passing, though the old general remembered his service at Yorktown and his membership in the Society of the Cincinnati with pride.

Sometime between 1815 and 1818 he sat for Vicente López y Portaña, the greatest Spanish portrait painter of the early nineteenth century. López portrayed Saint-Simon in uniform, wearing the blue-and-white sash and cross of the Order of Charles III, Spain’s highest military decoration, and a gold-and-silver medal, suspended from a yellow ribbon with green stripes—the “Medalla por Sufrimiento por la Patria,” created by King Ferdinand VII in 1815 and bestowed on soldiers imprisoned by the enemy. Along with these trappings of monarchical authority, Saint-Simon wears the Eagle of the Society of the Cincinnati.

This seems to be the only portrait of Saint-Simon, and it was wholly unknown in the United States until three years ago. It had been in private hands for two hundred years. It was displayed at the Prado in 1902 but hadn’t been seen in public since. During the Spanish Civil War the portrait was stored at the Prado, and by the time it was returned to the owners, no one could remember the name of the sitter.

Our staff started searching for a portrait of Saint-Simon more than a decade ago, while planning an exhibition on the Yorktown campaign. An old and not very good engraving in a mid-nineteenth-century book suggested that there was a portrait, but it seemed to be irretrievably lost. Then in the fall of 2017 a Madrid art dealer contacted us about a mysterious portrait on consignment from a Spanish family. The sitter, the dealer explained, was wearing the insignia of the Society.

After several weeks of negotiating, the portrait was on its way from Madrid to Anderson House, where it was removed from its crate on January 29, 2018, and put on display in the Original Library, where it joins portraits of other heroes of the Revolutionary War, and where General Saint-Simon’s service in our War for Independence is finally honored and appreciated.