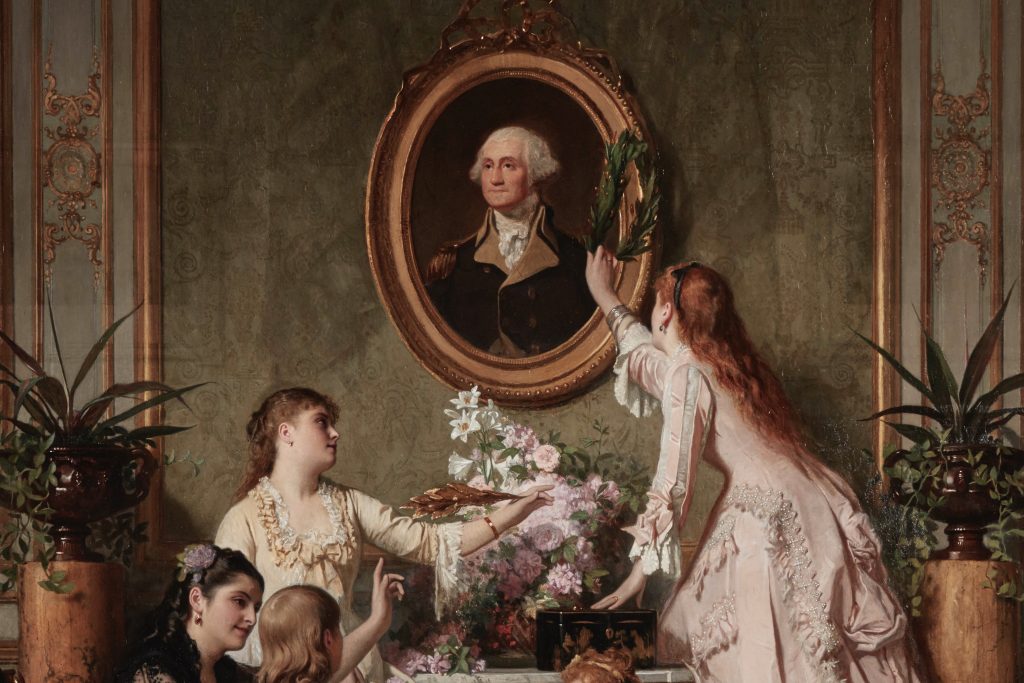 We honor George Washington more than any other American.  A state and dozens of cities, towns, and counties are named for him, as are mountains, parks, universities, bridges, highways, and streets. His home, lovingly maintained for more than 160 years by private citizens rather than the government, is a national treasure attracting nearly a million visitors each year. Hundreds of statues and dozens of monuments are dedicated to his memory. The greatest is an obelisk —the tallest monumental column in the world—in the heart of the capital city we named in his honor during his lifetime.

As we celebrate our national independence at a time of crisis in our cultural life, we should reflect on what he did to merit such honor.

George Washington was born into a world ruled by kings, where no one was truly free. Slavery and servitude were common. The right to participate in public life was limited to men of property. People were subjects, not citizens. No one was secure in the right to speak or worship freely. Women were subordinated to men — their talents stifled, their natural rights ignored, and their civil rights denied. It was a world of grotesque injustice, repellent to the modern mind.

Washington was born into privilege and grew to manhood in that world. At forty-three, having secured wealth and influence, he risked everything to command an army to secure the liberty and independence of the United States. It was an army of ordinary men—farmers and tradesmen, young and old, from every part of the new country. He forged them into an army of free men. He led that army through trials few could have endured.

After eight years of war, they won the independence of the first great republic of modern times—a nation dedicated to the proposition that all men are created equal, and endowed by their Creator with inalienable rights to life, liberty and the pursuit of happiness—a nation dedicated, not to the interests of kings and aristocrats, but to the interests of ordinary people. Nothing like it had ever existed.

Washington worked to perfect our nation. He worked to cement the fragile union so the country might survive in a world of predatory powers. He called on Americans to sacrifice their selfish interests for the public good, and spent his life in public service, neglecting his private affairs while devoting his days and nights to the business of the United States.

It was an imperfect nation. Grotesque injustices remained. Yet with each year those injustices became harder to rationalize.

George Washington was not perfect, but he worked to build a more perfect union. He and the women and men who struggled with him laid the foundation of our freedom in a time of darkness and oppression. They did not finish demolishing the vast framework of injustice they inherited. That has been the task of subsequent generations, including our own. It has been the work of many hands and many minds — of all races, of both sexes — of men and women from many lands, who have come to this great republic to find freedom, and of men and women of our own land, denied freedom, who have followed Washington and fought for liberty.

We ask all Americans to join us in honoring him and those who stood with him, remembering the words of President Obama’s first Inaugural Address: “Let us mark this day with remembrance of who we are and how far we have traveled. In the year of America’s birth, in the coldest of months, a small band of patriots huddled by dying campfires on the shores of an icy river. The capital was abandoned. The enemy was advancing. The snow was stained with blood. At the moment when the outcome of our revolution was most in doubt, the father of our nation ordered these words to be read to the people: ‘Let it be told to the future world . . . that in the depth of winter, when nothing but hope and virtue could survive . . . that the city and the country, alarmed at one common danger, came forth to meet it.’”

Wherever men and women fight for liberty, they fight in the spirit of George Washington. Wherever men and women are oppressed—wherever tyrants rule, and wherever people, young and old, are victims of ignorance and bigotry, of racism or sexism—wherever their liberties are denied, trampled or ignored, and people rise up, defiant and proud to demand their inalienable rights—the spirit of George Washington is with them. We should honor him as long as our love of freedom endures.

Above: Washington’s Birthday by Charles Baugniet, 1878, Indianapolis Museum of Art