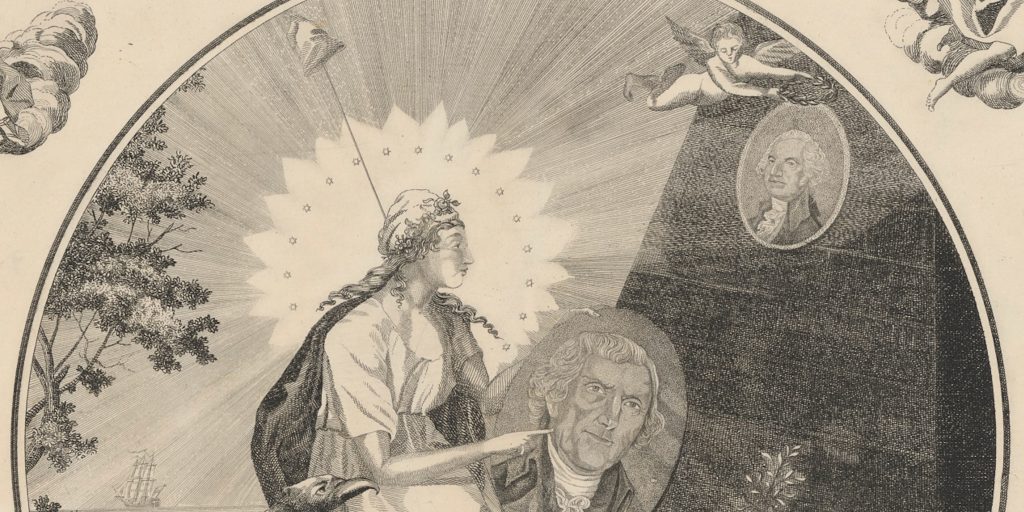 This essay was published in the spring of 2019, when demands for the removal of memorials to leading figures of the American Revolution was just beginning to pick up steam. It attributes the movement to the pernicious influence of the late radical historian Howard Zinn, from whose books many of the young Americans determined to pull down memorials in the summer of 2020 learned a dark version of American history.

If you’re surprised by reports that “student activists” at Hofstra University are demanding the removal of a statue of Thomas Jefferson from campus because “Jefferson’s values aided in the construction of institutionalized racism and justified the subjugation of black people in the United States,” you haven’t been paying attention to what gets taught in history classes in this country for the last thirty years. The young people at Hofstra—a private university on Long Island—are simply repeating what they’ve been taught.

By almost every measure, historical knowledge among high school graduates has been declining since the 1980s. In an increasing number of states and school districts, history is being crowded out by allegedly more “relevant” subjects. What time is left for history is often devoted to “global history,” which typically involves a shallow pass over a variety of world cultures. The little time spent on American history is often dedicated to a distorted tale of racism, misogyny and class oppression driven by capitalist greed, militant nationalism and institutionalized violence.

To get a sense of where the Hofstra students developed such a distorted view of the American past, peruse A People’s History of the United States, one of the most successful American history texts of the last generation. Over two million copies are in print, and the book has spawned videos, a website, and a collection of companion works, including a version for young readers. The book is required reading in many high school history classes, and a well-thumbed copy can be found on many young teachers’ bookshelves.

A People’s History presents a relentlessly dark tale of xenophobia, brutality, racism (foisted on poor white laborers by the master class), poverty, hardened inequality and class divisions, misogyny, imperialism, corruption, and always and everywhere, capitalist greed papered over with hypocrisy.  It offers more than a revisionist version of American history. A People’s History lays out a radical recasting of the American past, focusing, as one reviewer wrote, on “the genocidal depredations of Christopher Columbus, the blood lust of Theodore Roosevelt and the racial failings of Abraham Lincoln.” The young people at Hofstra who believe that the man who wrote our Declaration of Independence is a despicable enemy of humanity have drunk deeply from this well.

When A People’s History was published in 1980, it attracted wide notice for its readability as well as its iconoclasm and celebration of twentieth century radicals, from Emma Goldman to Mother Jones and Malcolm X, who were largely ignored by conventional history textbooks. Young college professors and high school teachers making their professional start in the 1970s found it refreshing. It resonated with the campus radicalism of their college years and the cynicism about politics engendered by Vietnam and Watergate.

The author, a Boston University professor of political science named Howard Zinn who variously described himself as a Marxist, anarchist, and democratic socialist, was one of their own. After a brief infatuation, many serious historians criticized Zinn for deliberately ignoring large swathes of American history, distorting others, and relying on unreliable sources. But Zinn’s many acolytes cling to the notion that he offers eye-opening truths long ignored or deliberately suppressed by other historians.

This is ironic, because Howard Zinn rejected the idea that historians can present objective truths. He argued that writing history is an exercise in making choices about what to present. Every historian’s work is selective, and that selectivity, he claimed, is based on bias. “There is no such thing as impartial history,” Zinn wrote.  Every description of the past, he insisted, “serves some present interest.”

Rejecting the idea of objective historical truth, Howard Zinn wrote history in the service of a political agenda he never tried to disguise. His writing was defined by his political activism—as a young labor organizer, a civil rights advocate, and an anti-war protestor. The “present interest” that drove him was his own unapologetically socialist agenda. In its service he crafted an alternative national history focusing on victims of oppression and exploitation, chiefly African-Americans, women, and laborers. He treated capitalism as institutionalized greed and nationalism as the source of war and the systematic exploitation of ordinary people by imperial powers and impersonal corporations driven by an amoral hunger for profit.

The “people” in Zinn’s People’s History are engaged in radical resistance to oppression by plutocrats, slave-owners, and other profit-seekers, or they are the tragically ignorant dupes of selfish elites. The great mass of ordinary people—working to improve their lives, acquire modest property, and provide for their families—barely make an appearance. The result is history without nuance, in which the players are good or evil—what one critic calls a “stick figure pageant of capitalist cupidity.”  Zinn’s aim was never to equip his readers to understand the past. His goal was to persuade them to reject the present and dedicate themselves to his vision for the American future.

A few years before his death in 2010, Howard Zinn said that “our highest ideals are expressed in the Declaration of Independence,” and that our history “is a striving . . . to make those ideals a reality.” But he regarded the American Revolution as a vast fraud, in which rich Americans used the rhetoric of equality and universal liberty to secure their own interests and impose new mechanisms for class exploitation on unsuspecting Americans. Zinn never explained where he learned about equality and universal liberty, nor did he acknowledge a debt to the revolutionaries whose ideals he claimed to represent.

Howard Zinn had a talent for story telling, which he employed to persuade his readers that he was letting them in on long-suppressed secrets about the American past. He made—and continues to make—his readers and those who are taught by them feel clever and in-the-know, despite the fact that his distortions have become classroom orthodoxy across the country. The young people at Hofstra who despise Jefferson think their radical iconoclasm makes them edgy and ever so smart. Unlike their elders who erected the statue, they know the dark truth about American history. They have Howard Zinn, his imitators, fellow-travelers and popularizers to thank for this wisdom.

Fortunately, Hofstra is led by a veteran president, Stuart Rabinowitz, too wise to join this herd of independent minds. “I have decided that the Thomas Jefferson statue will remain where it is,” he said last May. “Thomas Jefferson articulated the best of our ideals in the Declaration of Independence and was a defender of freedom.”  Jefferson had faults, to be sure, but President Rabinowitz explains that Jefferson and the other founders presented “a vision of a world in which all people are created equal,” adding that “it is this vision we celebrate and honor in our Founding Fathers, even as we wrestle with their human and indefensible failings.”

The American past, in short, is complex, and its characters a mixture of selfishness and idealism, and cowardice and heroism, ignorance and insight. In that past—knowable, if we work hard, read widely, and think critically, setting aside smug self-righteousness—are the foundations of a just society, built by the aspirations and actions of generations of Americans, rich and poor, free and enslaved, women and men alike. Our task is to build on those foundations, not tear them down.

Since we published How We Got Here in April 2019, the crisis in history education has deepened. To follow up on this theme, read The Revolutionary Dishonesty of the “1619 Project.”

For another critique of Howard Zinn, read “Lies the Debunkers Told Me: How Bad History Books Win Us Over” by Chris Beneke and Randall Stephens in The Atlantic Monthly.