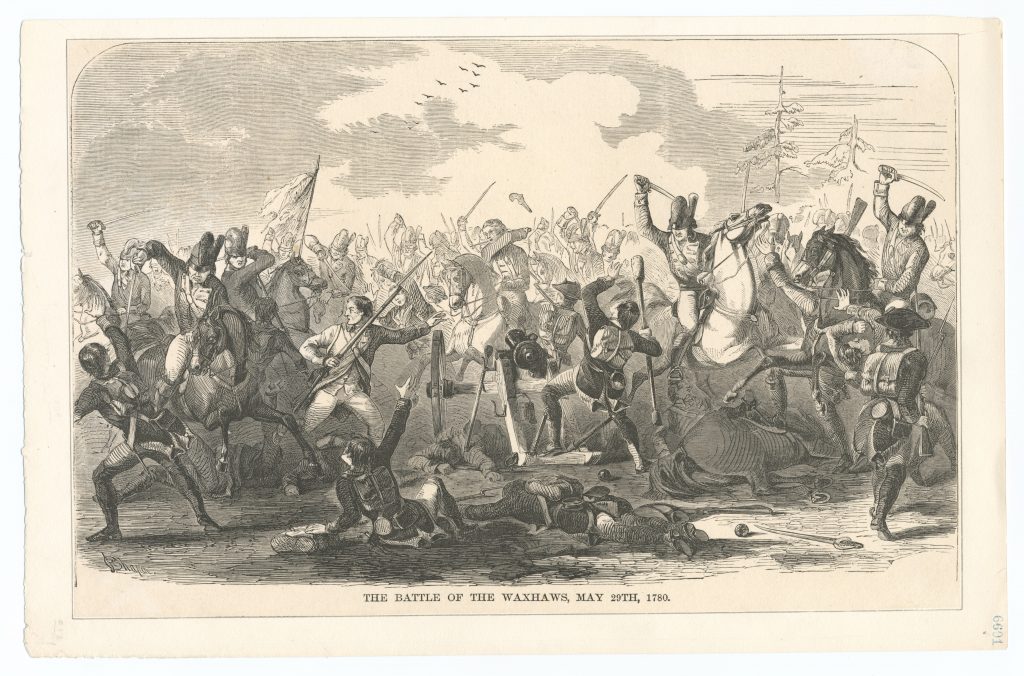 This lesson asks students to consider how the perspective of a person living in Revolutionary South Carolina was influenced by where in the state they lived, and how propaganda can be used during war.

Share the maps Carolina and South-Carolina and parts adjacent shewing the movements of the American and British armies with students and remind them they are continuing a study of South Carolina’s role in the Revolution. Students should turn and talk to review material from prior lessons on tensions between the lowcountry and the backcountry upstate during the colonial period. Unit vocabulary to be reemphasized at this time will include: patriot, loyalist, Tory, planter, lowcountry, backcountry, upstate, Continental Army, Battle of Cowpens, Battle of Kings Mountain, Battle of Eutaw Springs, Battle of Camden, Fort Moultrie, Thomas Sumter, Andrew Pickens, Francis Marion, Continental Congress, Stamp Act, Tea Act, Intolerable Acts, Declaration of Independence.

Share the image The Battle of the Waxhaws, May 29th, 1780 and ask students to answer the following questions in their notebooks:

Ask the class to make predictions about what point of view (patriot or loyalist) two South Carolinians (one from the lowcountry and one from the backcountry) will have using the following limited, geographically-based background information:

ELIZA WILKINSON: Eliza was born near Charleston in 1757 to a wealthy plantation family. During the Revolutionary War, she lived on a plantation on Yonges Island. What is your prediction?

ALEXANDER CHESNEY: Read the first page of Alexander’s autobiographical journal (original manuscript and published version). What is your prediction?

Take a tally of which side students believe each person fought. Challenge students to defend their answers. Ask students to point out on either the Moll or Ramsay maps where Wilkinson and Chesney lived.

As a class, read Alexander Chesney’s obituary. Remind students that an obituary is a family’s chance to define what they believe are their loved one’s greatest accomplishments in life. Working with a partner, have students discuss and answer the following questions:

Ask students to read the selected letters of Eliza Wilkinson and answer the following questions:

Ask students to read the “Cornwallis” letter after telling them that although the letter states it was written by British General Cornwallis it was actually a fake—created by an American patriot as a form of war propaganda circulated around South Carolina. The letter states that anyone found fighting for the patriot cause would be executed, which was against British policy and untrue. Ask students to answer the following questions:

Debrief as a class by exploring the following questions:

Students will write in their journals from the perspective of a South Carolina patriot or loyalist, using historical detail and making it clear where they live, which side they are on, and how they came to support either the patriot or loyalist cause.